The UN calls for greater government intervention to moderate the severe, unavoidable economic swings and inequalities brought about by increasing globalization. More here from the Washington Post:

Pointing to food riots in dozens of poor countries whipsawed by soaring prices for wheat and other staples, and to the rising income inequality that has become a too-common feature of economies in the developed world, the report says that no one is immune from the sometimes cruel consequences of global economic forces. But governments should do more, both individually and collectively, to protect people from their harshest impacts, it says.

The U.N.'s 2008 World Economic and Social Survey calls for greater regulation of international capital flows, more generous foreign aid and perhaps the guarantee of a minimum income to the world's poorest residents. Domestically, countries should do more to cushion their citizens against economic changes that have left them less secure. In poor countries, the insecurity can take the form of hunger and food shortages; in developed nations it often means stagnating wages and growing income inequality.

"Markets cannot be left to their own devices in respect of delivering appropriate and desired levels of economic security," the report says.

Global competition, which erodes the security of businesses, unstable capital flows, which crimp investment and growth, and food shortages are sometimes viewed as beyond the ability of governments to control. But the report says that is the wrong response. What is needed, it says, is "more active policy responses to help communities better manage these new risks."

The U.N. report calls for a range of interventions to provide support, including greater public investment in agriculture for poor countries and "a better balance of economic and social policies." It also said that even during economic booms governments should remain mindful of the downturns that can strike quickly, and set aside money to deal with them

Markets are good (probably the best system we can have) but we need to realize that it is imperfect and while it takes on the path to perfection, many more lives might be ruined if not intervened by the government or some other powerful bodies. Download the full report here (Sustaining Growth and Sharing Prosperity).

Some useful figures from the report: 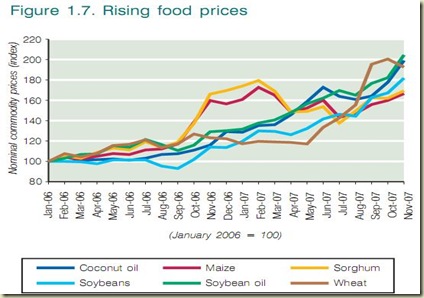 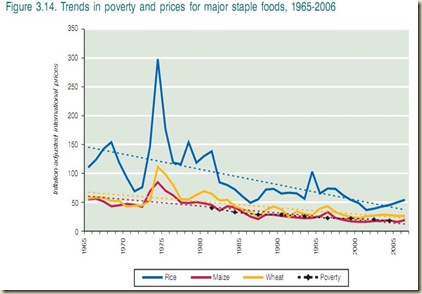 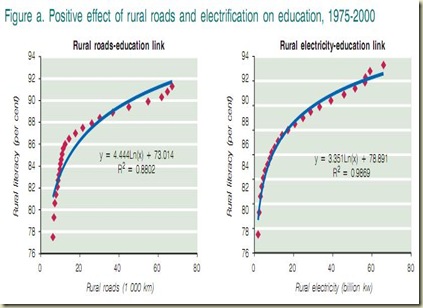 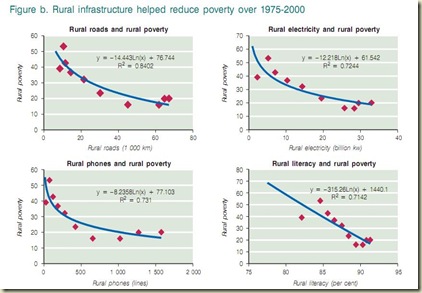 Posted by Chandan Sapkota at 11:43 AM No comments:

Interventions for improving livelihoods in SSA

Intervention in the water sector is needed because its access (and cleanliness) has direct relationship with poverty rates and poverty incidence. Here is a report (Water and the Rural Poor: Interventions for Improving Livelihoods in sub-Saharan Africa) from the FAO. This form of intervention works because it is context-specific and is a livelihood-centered approach to poverty reduction in rural areas. Experimentation with these kinds of programs have been usually successful.

The report argues that the likelihood of implementing successful interventions in the water sector varies according to the main sources of livelihood of rural populations, dictated in large part by the predominant farming systems, themselves closely related to agro-ecological conditions. Understanding the geographical distribution of the rural poor and their relation to livelihood zones therefore helps in designing intervention strategies to improve water management and increase both the resilience and productivity of agriculture, as well as agricultural incomes. 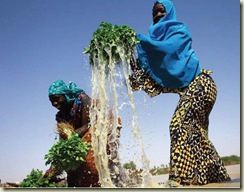 The report proposes a method for identifying the locations where water constraints are a major factor in determining poverty and where interventions can be made that would take large numbers of poor farmers out of poverty. It identifies and maps 13 major "livelihood zones" in SSA, each of which offers distinct opportunities for livelihood sustenance and development, has different agro-ecological conditions, and shows different angles for water-related investments for poverty reduction.

The report stresses that the choice of interventions at different scales should be taken from a non-prescriptive menu of appropriate options and based on an understanding of the particular context and target group.

The report concludes by discussing a set of typical water intervention options, and analyses their range of application and potential for poverty reduction according to the various livelihood zones. Six categories of possible interventions are discussed in view of their poverty-reduction potential:

Posted by Chandan Sapkota at 11:18 AM No comments: