Managing Director of the IMF, Dominique Strauss-Kahn, gave a speech at a CGD event on Sept 17. He talked about how the IMF is becoming flexible in helping developing countries cope with severe shortage of funds after the global financial crisis.

He argued that low-income countries have been hit harder than what was expected in March 2009 and now they remain highly vulnerable and face severe financing problems. These countries have been battered by multiple shocks--food and fuel price shock, global financial crisis, and drought and famine. The IMF estimates that low-income countries’ exports of goods and services could drop this year by 16 percent. A decline in remittances, by up to 10 percent, would further aggravate the plight of poor countries. Additionally, FDI flows to low-income countries might fall by 25 percent in 2009. Almost 17 million people are facing severe food shortages and may need emergency food aid, he said. Moreover, due to the global financial crisis an additional 90 million people will be pushed into extreme poverty.

He argues that there is something new about domestic policy responses in the developing countries this time-- most of them are “home grown”.

Some of this good news is home grown—always the best kind. Since many of these countries ran good policies, they built foundations to ward off the storm. This is something new. In the past, many low-income countries facing such a financial squeeze would have been forced to slash government spending, put administrative constraints on imports, or simply not pay their bills—making the crisis worse.

But this time is different. Debt positions had improved substantially, creating the breathing space for countercyclical policy. In fact, we estimate that almost two-thirds of low-income countries are at low or moderate risk of debt distress—this flows from better policies, and also from more aid and debt relief.

The IMF is increasing funding and making the process much more flexible. He also spoke something about conditionality (apparently, admitting that some conditionalities were in fact counter productive):

It’s no secret that our lending programs attracted some criticism over the years. People said our conditions were too harsh, too intrusive, or even misguided. I accept some of that criticism. We made mistakes, but we always try to learn from our mistakes. Overall, I think the PRGF was a success. Countries with sustained program engagement over the past two decades saw bigger boosts to growth than those without such involvement.

Still, we need to make sure that the medicine does not harm the patient. Over the past few years, we have been streamlining our conditionality, focusing on core policy measures that are critical for macroeconomic stability, poverty reduction, and growth. Too many conditions in too many different areas can reduce effectiveness and lead to a loss of legitimacy. Across low-income country programs, the number of conditions has fallen by one third compared with the beginning of the decade. About 40 percent of these conditions are now focused on improving public resource management and accountability—such as expenditure control and tax administration.

Recent reforms have gone even further. From now on, our loans no longer include binding conditions on specific measures. Instead, programs will focus on meeting the overall objectives of the reforms, giving governments more leeway in reaching their goals.

Posted by Chandan Sapkota at 11:38 AM No comments:

Need to harmonize WTO with RTAs

Carnegie Endowment organized an event about WTO and how we can move forward with existing agreements so that the institution is relevant in the days ahead.It was argued that trade negotiations should be flexible to accommodate emerging thorny issues in the developing countries. Stalled trade negotiations could be passed if negotiations focus on liberalizing the sectors that are already moving forward in that direction due to independent initiative from individual countries. If the Doha Round has a slim chance passing in its entirety, then it can be passed by diluting the deal to accommodate new concerns of emerging and developing nations.

Uri Dadush presented a policy brief (WTO Reform: The Time to Start is Now), where he argues that the next round of WTO negotiations should be more flexible and tailored to the needs of individual countries and trading groups. He raised a very interesting perspective that most of the achievements under the WTO were in fact already moving forward in that direction due to bilateral and regional agreements among nations. The WTO just formalized and incorporated those already existing agreements under its framework. The most thorny issues related to subsidies are yet to be sorted out and this is what plagues the protracted Doha Round. Reductions of applied tariffs on trade in goods since 1995 is attributable to autonomous liberalization (65 percent), implementation of the Uruguay Round (25 percent), and regional arrangements (10 percent).

The WTO is increasingly bypassed in trade reform by unilateral, bilateral, and regional processes, and no new liberalization of trade in goods has come from multilateral negotiations since the institution was founded in 1995.

The WTO is nowhere to be found in several areas of crucial concern, including food security, international financial regulation in the wake of the global financial crisis, and climate change.

The WTO must break away from its splendid isolation and move from a single-minded focus on reciprocal multilateral concessions based on consensus and find ways to participate actively in arenas where actual liberalization is taking place.

The Doha Round is more complex and is hard to pass in its entirety because not all countries would agree to its provisions without diluting some of them to fit their national interest. The Doha Round has been complicated by the increased sensitivity of agricultural issues, the complexity of trade-offs in behind-the-border regulations in services sector, the growing number of diversity of trading partners, and the increased influence and assertiveness of large players and of groupings (LDCs). It is hard to reach a consensus incorporating all the members’ concern. This does not mean that consensus cannot be reached. Consensus can be reached in a diluted form, i.e. dealing with easier issues now and leaving thorny issues for later [we already did this one with the previous five rounds of negotiations and the most thorny issues were left to deal with for the Doha Round!]. How many issues can we leave now and then how much can achieve from the Doha Round? Hard to answer. However, Dadush feels that concluding the Doha Round is essential to preserving the credibility of the WTO as an institution and to avoid writing off the gains made in the last eight years of costly negotiations.

At at time when regional agreements are flourishing, the WTO should find a way to honor and incorporate provisions under such agreements within its global system. This will keep on the relevancy of the WTO. Generally, regional agreements are fast to come up with because of it is easy to form a consensus with few players. They are also designed to address country-specific needs and lessen discrimination: a low external tariff, simplified rules of origin, and coverage of all forms of trade. Dadush argues:

Establishing effective rules to govern regional agreements should be the WTO’s long-term objective, but its constructive engagement with regional processes is a prerequisite to achieving that goal.

In fact, the WTO seems to have realized this aspect and is arguing for giving more policy space to individual countries to help them weather unexpected demand and supply shocks. A recent WTO World Trade Report emphasized for inclusion of “trade contingency measures”. The contingency measures discussed in the report include safeguards measures, anti-dumping and countervailing measures, the re-negotiation of tariff commitments, the raising of tariffs up to their legal maximum levels, and the use of export taxes. These are needed because too little flexibility in trade agreements may render trade rules unsustainable. At the same time, too much flexibility may weaken the value of commitments and trade rules. An appropriate balance between flexibility and commitment is required for the success of trade agreements. There are some who argue that RTAs undermine full gains from global trade but evidence is not that strong in the light of increasing South-South trade. There are more gains to be made by encouraging WTO to engage in “opportunistic multilateralism” by strategically expanding existing RTAs into other relevant areas. 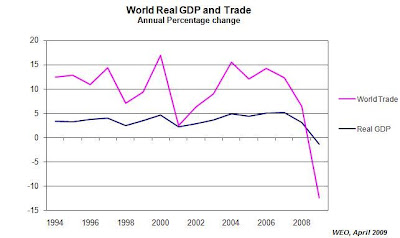 Steve Charnovitz, one of the panelist, argued that though judicial and executive branches of the WTO are working fine, it is not the same with the legislative process. He maintains that the existing WTO is out of sync with developments in the real world. Its limits on national regulation are not consistent with the changed market structure in place right now, especially in the new regulatory structure after the global financial crisis. Also, this is an era of huge government subsidies to almost all the crucial sector in an economy. This is not in line with the WTO regulations. Since the situation is bad everywhere and almost all of them are engaging in propping up flagging sectors, no one is complaining. He opines that the WTO should hold public hearing on each new PTA. He wants WTO to have a mix of states, NGOs, and private actors--like IUCN does.

Arvind Subramanian argued that new forms of protectionism is emerging out despite other restrictions from the WTO: exchange rate policies to prop up domestic exports and resource nationalism (export restriction or rice and gas last year).

Posted by Chandan Sapkota at 6:05 AM No comments: