Hydropower projects with PPA in dollars in Nepal

Given the long load-shedding hours, the inability of domestic BFIs to fund large hydropower projects, and the government’s limited (usable) fiscal space considering the scale and scope of investment needed, there is no doubt that foreign investment is essential to generate and supply enough hydroelectricity that can eventually revitalize the economy (through supply of adequate power domestically) and also export surplus to India (would be a good source of revenue).

However, the main sticking point for any deal is power purchasing agreement (PPA) in dollars (or foreign currency). Investors want PPA in foreign currency to avoid foreign exchange risks as they have to raise money outside and then repay it in foreign currency after generating revenue from investment projects in Nepal. It is also related to financial and institutional soundness of NEA, the dysfunctional and politicized institution that is at the center of all deals. No investor would ideally want to make a deal with a bankrupt and institutionally weak entity. Hence, the other sticking point related to this one is sovereign guarantee. Again, the investors see it as an important assurance of returns to their multi-year investments, but the government is not ready to offer such guarantee (technically, the government cannot provide sovereign guarantees for SOE’s borrowings/investments expect for the purchase of aircraft— however, exceptions have been made such as the guarantee of repayment of NOC loans to EPF and CIT). The government argues that since NEA has not defaulted so far, the government is implicitly guaranteeing its agreements anyway. However, from investor's perspective, they want credible assurances embedded in legal framework.

NEA has a bad experience with PPA signed in dollars (foreign currency). The two such projects in operation with PPA in dollars are Khimti Hydropower (60 MW) and Upper Bhotekoshi (45 MW). NEA spends around 40% of its revenue in payments to these two hydropower projects. NEA feels the heat particularly when Nepalese rupee depreciates with respect to the US dollar. Here is a nice article published on Republica (by Rudra Pangeni). Below is a list of projects, sourced from the Republica article, with which NEA has signed PPA in dollars. 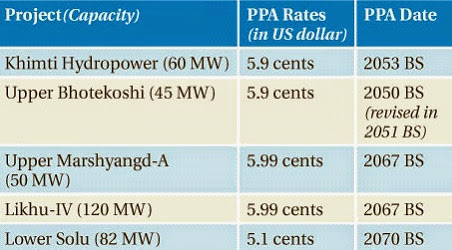 NEA recently came up with a hybrid scheme: PPA in dollars for a certain percent of total hydroelectricity generated, and the rest in local currency. For the 82 MW Lower Solu project, NEA will pay only 55% in US dollar and the rest 45% in local currency. Currently, the leadership at the Ministry of Energy is against signing PPA in dollars (even some parliamentarians are opposed to it) without first assessing the liabilities to be incurred by NEA over the years.

Now, Nepal needs foreign investment (plus technology and know-how) to undertake sizable hydroelectricity projects. Investors ideally want PPA in dollars and sovereign guarantee. But, some at the leadership position are neither willing to do both nor are credibly committed to the needed unpalatable reforms at NEA (and the entire energy sector). It is up to the government to find an equilibrium that can accommodate these diverging views, and move ahead with an urgency to sustainably exploit the natural resources to power up houses and manufacturing plants.
Posted by Chandan Sapkota at 1:32 PM No comments: