David Pilling argues that it is vital that more labor from low-productivity farm sector migrate to higher-productivity industry so that India achieves an economic growth rate that has power to reduce poverty and increase prosperity in a large scale. He draws out a recent day dichotomy: the tussle between Tata’s Nano factory in West Bengal and protests by farmers displaced from land where the factory is to being built. He argues that if there is to be large scale industrialization, then India better solve these problems and let the process of prosperity roll forward.

…As many as 600m people, or about 47 per cent of China’s population, live in cities, at least 100 of which have swelled to more than 1m inhabitants.

In India…of the 406m labour force in 2000, 78 per cent lived in rural areas against just 22 per cent in towns and cities. The structural transformation from low-productivity farm labour to higher-productivity industry has been painfully slow. Today, agriculture employs about 60 per cent of the workforce but accounts for a measly one-fifth of national output. The predominantly urban, “organised” sector produces 40 per cent of output with just 7 per cent of the workforce.

…More fundamentally still, as the dispute over land in West Bengal shows, it is hard to engineer mass migration in a democracy. In contrast to 18th century Britain and 21st century China, the vote of a dispossessed Indian peasant is worth the same as that of a would-be industrialist. Collectively, it is worth more. “You have to hand it to Indian democracy,” says Mr Hasan. “It does give you a voice. But that makes it very difficult to negotiate change.”

It is really hard to solve these kind of problems because the poor farmers can easily vote out the party which takes decision in favor of industries trying to displace people from their land to make factories. Term it ironical or whatever, the reality is that this is democracy. The poor farmers have no choice. Same applies for the manufacturing industries because if they cannot get land, then they will not invest.

This is very tricky problem for the politicians. The leftist parties take advantage of these situations and win election on the back of popular slogans. Though low quality or even absence of education and healthcare are one of the roots of these problems, I don’t think they are as important as Pilling thinks in creating this kind of deadlock. A major problem lies in the century old caste system and the scourges associated with it. Remember, India is a very culturally, ethnically, and politically divided country. Let short, quick judgment not overshadow other important constraints!

The War for Wealth: The true story of globalization

I just finished reading The War for Wealth: The true story of globalization, or why the flat world is broken, written by Gabor Steingart. I picked up this book from the library last week mainly because it included an interview with Paul Samuelson. 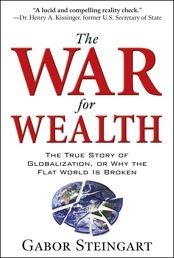 This book is light read yet a compelling one. You will neither find rigorous arguments, data, and detailed descriptions like you get in books written by Rodrik, Stiglitz, or Bhagwati nor you will find anti-globalization (anti-trade) sentiments resonated in Lou Dobbs’ and, to so degree in, Naomi Klein's books. This is not an intellectually challenging book on globalization but is thought-provoking. It looks more like a journalistic work; reporting style writing and not so surfacial but also not too in-depth analysis! The analysis is heavily skewed towards the plight of working class in the US (and to some degree in the Europe). Steingart dismisses Thomas Friedman's idea that "the world is flat" by arguing that disproportionate gains from trade and globalization do not add up to the world being a flat world.

He accentuates, over and over again, the differences between capital and labor market (labor market is not and cannot be flat) and how cheap labor in China and India are gaining and how middle class is emerging in these countries while in the West there have been erosion of low-tiered jobs and slow erosion of middle class.

He refutes the prevailing notion (on trade related debate) of structural adjustment in the job market by presenting statistics on job losses not only in the low-tier jobs but also in the blue-collar jobs. Meanwhile, service sectors jobs are also not increasing in the West. This means that globalization has been unfair, i.e. it is not producing win-win situation, as predicted by some trade theories, in the West. It is a win-lose situation in the West and a win-win situation in the emerging developing nations like India, China, Vietnam, and Brazil.

He also has objection with the profit-minded capitalists who overlook basic labor and environment standards in factories in China and back-office service companies in India. Steingart is worried that the US will be left behind even in knowledge market as Chinese and Indian government pour in more and more money for research and development; he fears that the next Einstein would be from India or China.

He argues that globalization is not debated as is see in reality. He also presents seven fallacies of globalization debate. His book also contains an interview with Paul Samuelson, who also resonates Steingart's argument (or it might be the other way round) that globalization has produced a win-lose situation in the US and the Europe.

…The war for wealth, a bitter struggle for a share of afﬂuence, and the related struggle over political and cultural dominance in the world, are the real conﬂicts of our day. The war on terror is overblown, the man in the White House has set the wrong priorities, and the public— deliberately or not—is being kept in the dark over the true extent of the global shift of power and wealth. (pp.ix)

…The opponents and proponents of today’s globalization are united in being mistaken. Without knowing it or wanting it, they are part of a single party one could call “America, Don’t Move.” This party appears on no ballot, never holds party conventions, and has never organized a fund-raiser. It doesn’t send any of its luminaries to appear on Meet the Press or post promotional videos on YouTube, nor does it hire pollsters to investigate the opinions of farmers, housewives, and minorities. (pp.9)

The flat world is broken!

…Within a period of time that would amount to barely a blip in history, 3 billion additional people and there- fore 1.5 billion new workers joined the world’s labor force and helped bring about an unprecedented shift in the balance of power. The West’s 350 million well-trained but costly workers, who until then had been responsible for a large segment of world production, became a minority almost overnight. (pp.133)

…The world is by no means running out of work, as some claim. As long as the number of goods that are produced, sold, and consumed increases, there can be no loss of jobs. At the beginning of the twenty-ﬁrst century, the global economy is experiencing one of its biggest growth spurts in decades. Despite the advent of the Internet and industrial automation, the sheer volume of jobs continues to increase. What has changed, however, is the distribution of labor in the context of a global labor market. This labor market is unlimited—but not for the Western worker. (pp.141)

Samuelson’s take on the outcome of globalization:

…The globalization leads to a win-win situation for people in China. That’s true for the poor people in China and for the wealthier people in China. In the United States, the development appears to be very different. Highly specialized and professional members of the workforce will proﬁt, while the run-of-the-mill working-class people will be the losers. It’s a win and lose situation. (pp.267)

…In the globalized society, we will see a deeper split within the developed nations. I think the lower half of the income distribution will be the losers. Globalization means two things: in all probability it means an increase in inequality, and in all probability it also means a loss of serenity. Globalization brings us more prosperity, but it also leads to more uncertainty, tension, and enhanced inequality. In America, it has already led to a cowed workforce. Even for an MIT graduate, things have changed. (pp. 270)

My ﬁrst piece of advice would be: choose the middle way. There is no substitute for the market mechanism— but the market mechanism has no brain, it has no heart. Without political programs it will inevitably breed inequality. My second piece of advice would be: globalization in its current shape and speed makes the world a more insecure and nervous place. We should try to slow down, and, in our own long-run interest, try to be less aggressive. (pp.274)

Oh, I don’t want to miss this! Samuelson on Keynes and Schumpeter:

…First, I was against Keynes because he was contradicting what all my wonderful professors believed. But ﬁnally I decided, am I going to let reality take over or am I going to let ideological reverence prevail? My teacher at Harvard University was Joseph Schumpeter, the famous Austrian economist who had come to Harvard from Weimar Bonn University. Schumpeter was erroneous on the Great Depression. He saw it as a healthy thing. His diagnosis was that the Great Depression was a good thing because it was going to improve productivity. Well, of course it didn’t. Of the 40 most gifted graduates in the physical sciences and the 40 most gifted graduates in the biological sciences, in my ﬁrst year none had a job for the next year. What good was that going to do for the productivity of the subsequent U.S. economy?

...It used to be said that Schumpeter’s nose was out of joint, that he was kind of jealous of Keynes. He said to me: “You are in favor of Keynes because you are a socialist.” I said: “Professor Schumpeter , I come from the University of Chicago—the citadel of capitalism! When was I ever a socialist? You don’t have to be a socialist to be in favor of Keynes.” And he said: “Well, you are a socialist in the sense that you don’t revere the capitalist system.” Well, that was true. I spent my ﬁrst 15 years under the rule of pure capitalism, and it had lots of advantages and lots of disadvantages. (pp.165-6)

Here is a video of Steingart's talk: