On 26 April, Central Bureau of Statistics (CBS) estimated that Nepal’s economy (at basic prices) would likely grow at 6.8% in FY2019, up from 6.3% revised estimate for FY2018. However, the projected growth rate is lower than the government’s 8% target. This is the third consecutive year GDP grew by over 6%. The 7.7% growth (at basic prices, FY2001=100) in FY2017 was the highest since FY1994, when GDP grew by 7.9%. That was largely due to a base effect and spending during the first two phases of local elections.

In FY2018, spending during local and parliamentary elections gave a temporary boost to aggregate demand along with notable progress in industrial sector as better electricity supply and a pickup in post-earthquake reconstruction work increased economic activities. 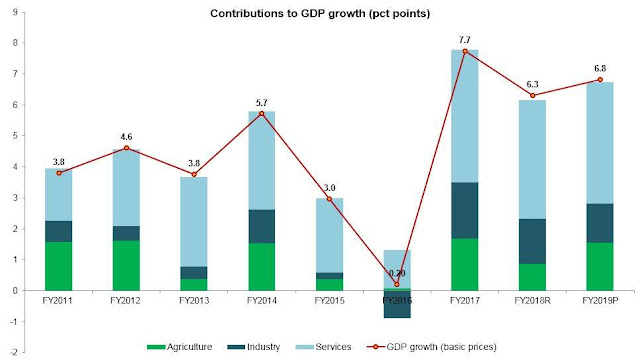 Specifically, electricity, gas and water sub-sector is projected to grow at the fastest rate (12.4%, up from 9.8% in FY2018), followed by wholesale and retail trade (10.9%, down from 12.3% in FY2018), mining and quarrying (9.5%) and construction (8.9%). These indicate accelerated work in hydroelectricity generation and ongoing construction as well as pickup in reconstruction related activities (public as well as private housing and infrastructure). The high wholesale and retail trade activities are related to the burgeoning import growth and remittance income.  Overall, robust agricultural output is underpinned by favorable monsoon and timely availability of agricultural inputs, and high services sector output is supported by wholesale & retail trading, tourism and real estate activities.

Agricultural output is projected to grow at 5.0%, up from 2.8% in FY2019, largely due to a bumper agricultural harvest (thanks to favorable monsoon) and increase in output of forestry products used for reconstruction activities. In addition to record paddy output, which has a weight of 20.8% in overall agricultural GDP basket and is expected to grow by 8.9% (up from 1.5% decrease in FY2018), good harvest of vegetables, wheat, maize and potato boosted agricultural sector growth. Agricultural commercialization and availability of chemical fertilizers and irrigation facilities also helped to increase agricultural output. 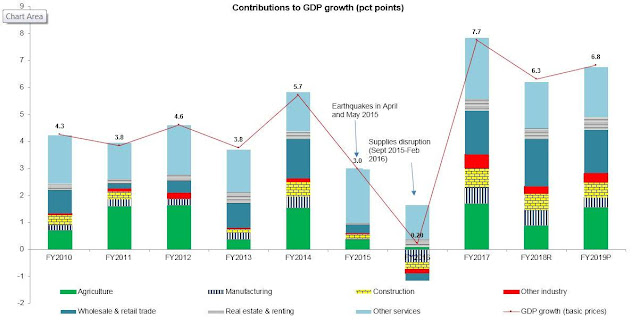 Industrial output is projected to grow at 8.1%, down from 9.6% in FY2018 and 12.4% in FY2017. Within industrial sector, electricity, gas and water subsector grew at the fastest rate: 12.4%, up from 9.6% in FY2018. About 22MW of additional electricity was connected to the national grid and a favorable monsoon increased water flow, which then boosted hydroelectricity generation of projects that depend on run-of-the-river type production. More electricity is expected to be added to the national grid by the end of this fiscal year. Mining and quarrying activities are projected to grow by 9.5%, up from 8.9% in FY2018, as mining and quarrying of stones, sand, soil and concrete intensified in response to large and growing demand for reconstruction activities. The haphazard mining and quarrying of river beds and hills, sometimes at the initiation of local governments, is one of the factors for this sub-sector’s robust growth.

Meanwhile, construction and manufacturing activities slowed down. Construction activities are projected to grow by 8.9%, down from 10% in FY2018, largely due to the slow capital spending (especially the setback in Melamchi water supply and delay in Upper Tamakoshi hydroelectricity, both of which were expected to be completed last year). Manufacturing activities are projected to grow by 5.8%, much lower than 9.2% in FY2018, indicating the lack of private sector investment as well as loss of both domestic and external markets due to eroding cost and quality competitiveness. Stable supply of electricity and improved industrial relations were not sufficient to jackup manufacturing output. 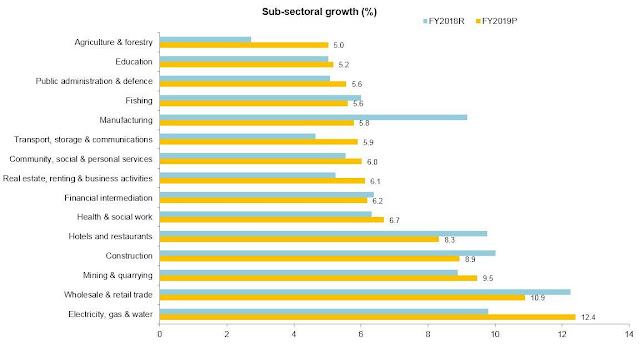 Services output is projected to grow at 7.3%, marginally up from 7.2% in FY2018. Within service sector, wholesale and retail trade activities are expected to grow by 10.9%, down from 12.3% in FY2018. This reflects continued strong import demand (as remittance-financed imported goods are traded in the domestic market) and sale of agricultural and industrial goods. Record tourist arrivals and stable supply of electricity underpinned activities in hotels and restaurants. However, 8.3% projected growth for this sub-sector is slower than 9.8% in FY2018. Tourist arrivals increased by 24.8%, reaching a record 1,173,072 in 2018, up from 940,218 in 2016. Expansion of communications network as well as smooth operation of transportation services (including air transport) pushed its growth to 5.9% from 4.6% in FY2018. Financial intermediation is projected to grow by 6.2%, slightly lower than 6.4% in FY2018, reflecting income of NRB, BFIs, insurance board and companies, securities board, EPF and CIF. Real estate activities have picked up and consultancy businesses have flourished, pushing real estate, renting and business activities growth to 6.1%, up from 5.2% in FY2018. All other services sub-sectors are expected to grow by over 5%.

On the expenditure side, GDP (at market prices) grew by 7.1%, up from 6.7% in FY2018. Consumption accelerated but public fixed investment (public GFCF) decelerated, indicating a slowdown in capital spending. A much higher increase in import and a slower increase in export meant that net export was negative. 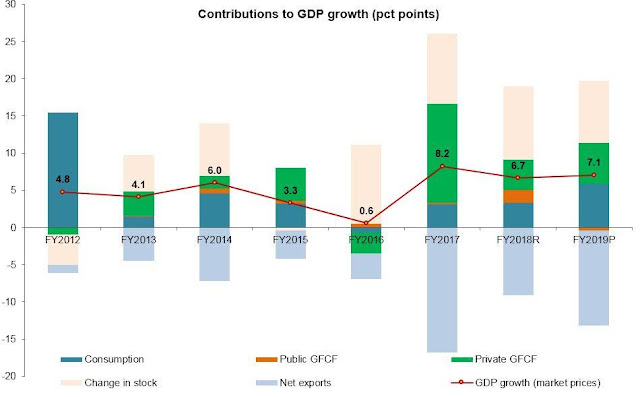 Here are some takeaways from the latest GDP estimate.

First, three consecutive years of over 6% growth is quite remarkable. But, recall that in FY2017 it was a base effect, in FY2018 it was elections and in FY2019 it was favorable monsoon and pick-up in retail and wholesale trade (along with tourism and post-earthquake related reconstruction activities). It means that it was a consumption-led growth (supported by higher remittance income and public recurrent expenditure). Consumption contributes more GDP growth than any other component (except change in stock, which is not a reliable measure but adds up to total GFCF since it is derived residually and statistical discrepancy or error is included). Change in stocks at 25.3% of GDP is unusually high.

Second, is this going to be sustainable? The government is hoping that investment will increase in large infrastructure projects and construction related activities there will drive demand. If this happens along with a substantial uptick in capital spending absorption capacity, then growth around 6% is achievable (favorable monsoon and tourism factors as always). Else, growth may decelerate in the coming days. Note that monetary and fiscal policies have been expansionary, resulting in high credit growth as well as high import growth. The current account deficit is increasing alarmingly, balance of payments is in deficit and forex reserves are decreasing. The government may not be able to continue with larger fiscal deficit (also fiscal stimulus) or distributive programs. It will have to wind down unnecessary expenditure (mostly from recurrent budget) while keeping capital expenditure high and efficient. So, unless public and private investments increase further, this streak of growth rate is not sustainable.

Third, the slow public capital spending may be one of the reasons why the government was not able to attain its GDP growth target of 8%. Public gross fixed capital formation actually decreased by 8.1%, from 29.4% growth in FY2018. The unveiling of budget one-and-a-half months prior to the start of the fiscal year did not help. Chronically low capital spending is a structural as well as procedural issue. The fiscal transfers to subnational governments (which come under recurrent budget of federal government, but capital budget of provincial and local bodies) are not being used to create capital assets, but on activities that increase unproductive imports (vehicles, etc).

Fourth, despite all the talk about investment-friendly legal and operational environment, manufacturing sector growth plunged to 5.8% from 9.2% in FY2018. Talk is not reflecting into action on the ground. If investment and industrial activities do not pickup, then it will be hard to maintain growth rate of 6% (we are reaching the fiscal limit of public capital spending given the large and growing recurrent spending commitments). Manufacturing sector is just 6.3% of GDP. The high credit growth used to finance imported goods but continued liquidity tightness (with high interest rates) may be affecting manufacturing output. This sector is losing both in terms of cost and quality competitiveness.

Fifth, like in FY2018, it’s the wholesale and retail trade that is contributing the most to the growth. Out of 6.8% projected GDP growth, this sub-sector alone contributed 1.6 percentage points. Its share in GDP is about 14.8%, which means it as big as the entire industry sector (composed of mining & quarrying, manufacturing, electricity gas and water, and construction). High import growth and remittance income fuel growth of this sub-sector. So, even a marginal optimistic growth projection for retail and wholesale trade activities makes a huge different to overall growth rate because its share in GDP is the largest and also contributes the most to GDP growth rate.

Sixth, per capital GDP has increased to US$1034, thanks to a double-digit growth of nominal GDP (14.3%, up from 13.3% in FY2018). The size of the economy is projected to increase to US$30.5 billion. Per capita gross national disposable income (which factors in remittances as well) is projected to be US$1364, up from US$1290 in FY2018. Gross domestic savings (GDP minus final consumption) has increased to 20.5% of GDP, up from about 10% of GDP four years ago. What is happening is that on the expenditure side consumption is lowered but gross investment is increased drastically (by increasing change in stocks). This doesn’t fit well with the supply-side data on high services output but restrained industrial output (especially manufacturing and construction). 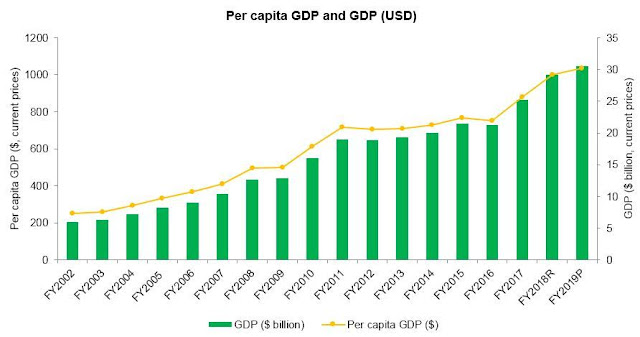 Seventh, the economy can sustain growth of over 6% with an appropriate mix of macroeconomic strategies, financial arrangements, smart project execution, and supportive institutions and policies. Government has an important role to play in providing critical infrastructure, addressing market failures, designing a growth-enhancing tax regime, and implementing business-friendly policies to usher in a meaningful structural transformation. It also needs to enhance both the quantum and quality of public capital spending to over 8 percent of GDP annually. Again, the key going forward would be to increase private investment and to reduce fiscal deficit without jeopardizing quantum and quality of capital spending. 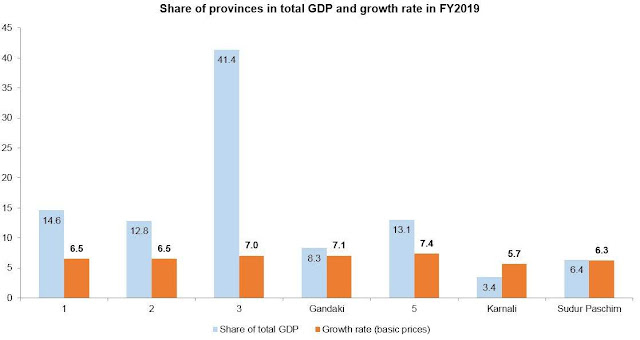 Posted by Chandan Sapkota at 10:44 AM No comments: