After over 8 years, where does AGOA stand?

Africa Growth and Opportunity Act (AGOA), signed in May 18, 2000, provides Sub-Saharan African exports (mostly textiles and apparel) duty and quota free entry into the US markets and also provides for trade facilitation and technical assistance to African producers. After more than eight years, how much has African countries actually benefited and if it is helping them achieve what AGOA was supposed to. Mwangi Kimenyi, Brookings Institution, argues that though trade volume has increased multiple folds, the AGOA's impact on stimulating growth and increasing employment have been limited. It is not good news since AGOA is usually touted as one of the best trade and investment strategies offered by US to the Sub-Saharan African countries. At present, 37 countries are AGOA-eligible.

What's the impact of AGOA? First, there is always an increase in volume of trade whenever there is free trade or trade under preferential trading agreements. The imports to US from Sub-Saharan Africa (SSA) increased by multiple folds-- in 2008, the US imported $81 billion of duty free goods from AGOA-eligible countries, up from $7.6 billion in 2001. Kimenyi argues that though there has been an increase in trade volume, the African countries have not been able to exploit fully the opportunities given to them by AGOA. The share of African countries' exports in global trade is very low.

In 2008 total apparel imports to the U.S. were valued at $93 billion, of which SSA accounted for $1.1 billion (1.26 % of the total market). In the same year, Bangladesh alone exported $3.5 billion worth of apparel (3.79 % of total market)—more than double the entire exports from SSA. Also of concern is that African exports under AGOA have declined in recent years. For example, African AGOA exports in 2004 and 2007 accounted for 54.5% and 36.5% of total exports to the United States respectively.

Also, AGOA has not fully helped the African countries diversify their production structure. Some of the goods that are exported now are the same covered under Generalized System of Preferences (GSP). Importantly, almost 96 percent of the exported items are energy related, which would have been exported anyhow due the continuing rise in demand for energy in the global market.

Of the AGOA exports, $52.8 billion of exports (95.7 percent) consisted of energy related products (mainly crude oil). Thus, the real benefits of AGOA to African countries are much lower than what aggregate numbers show—about $3.5 billion of exports.

He argues that since the African countries have been unable to exploit the opportunities provided by both GSP and AGOA, emphasis should be put on helping the countries overcome their trade-related shortcoming. Two important recommendations are:

-Cutting down the cost of doing business: SSA countries are not competitive because of a lack of infrastructure, ports, electricity; regulatory burden and licensing procedure. The Doing Business Report shows that the ease of doing business in SSA is the lowest when compared to other regions. 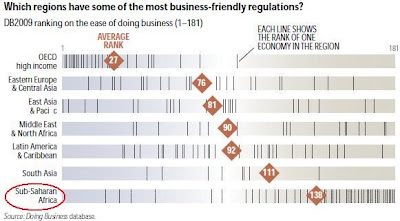 Other recommendations include simplifying the approval process (especially on health and safety standards while importing to the US); evaluating proposed preferences to less developed countries (providing similar access to other developing countries that are already established in the field destroy SSA investment and exports); revocation of status (investors might pull back investment if there is a possibility that a given AGOA-eligible country could be stripped off the AGOA benefits due to political reasons); harmonizing member positions (African countries should have a collective, concerted voice through the African Union so that they are well represented and well heard during trade negotiations).