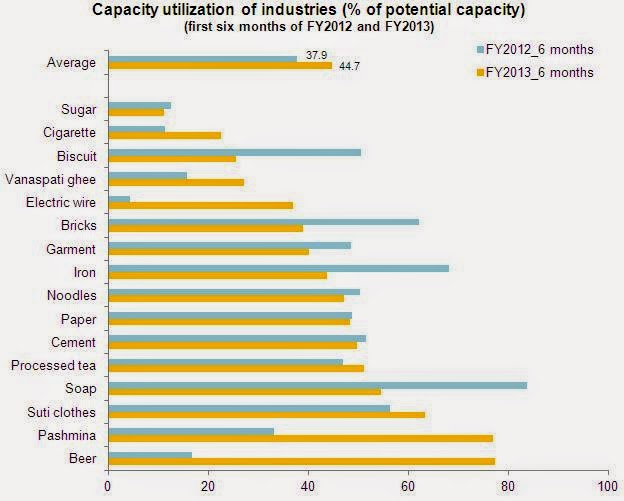 The figure shows the capacity utilization, which is the realized portion of total production potential in the review period, of major industries in Nepal. The data for it are sourced from the survey  carried out twice a year by the Nepal Rastra Bank in key industrial areas such as Kathmandu, Biratnagar, Janakpur, Birgunj, Pokhara, Siddarthanagar, Nepalgunj and Dhangadi.

The latest survey findings reveal that the capacity utilization of domestic industries has improved to 45% of potential capacity in the first six months of FY2013, up from 38% in the same period in FY2012. However, this level is still low and indicates that Nepal’s industries are operating far below the potential capacity. Capital and labor employed by industries have not been able to use their potential fully to meet the actual production capacity. Capacity utilization of industries tends to be higher towards the end of the fiscal year, when there is also more electricity supply due to higher electricity production during wet season. The full year capacity utilization in FY2012 and FY2011 was 58% and 54%, respectively.

What is contributing to the low capacity utilization of Nepal’s industries? It has to do with persistent supply-side constraints and structural bottlenecks.

First, the lack of adequate supply of electricity is the major binding constraint. The long hours of power cuts, especially during dry season, severely curtails the operation hours of industries. This limits production below the potential. For those who can afford for it, diesel run generators are the savior. But, it comes with high per unit cost as well. It means uncompetitive production, resulting in loss of market. Ultimately, the lower market demand due to high per unit cost (slightly differentiated imported products become relatively cheaper) means lower production and below potential capacity.

Second, the recurring labor-industry disputes over wages, allowances and facilities have led to either closure or partial operation of manufacturing plants. Labor disputes prolong for days and this not only shuts down machineries, but also forces employers to incur higher cost of operation (capital stays idle and workers have to be paid even if they go on a strike). Nepal faces a situation where minimum wage in manufacturing sector is the highest in South Asia, but productivity is one of the lowest.

Third, the lack of innovation and research and investment leads to less than optimal utilization of available stock of capital. Workers are not adequately trained to operate and supervise operation of newly introduced machineries. Furthermore, the industry hardly invests in R&D and hence there is barely any innovation in production as well as marketing of products.

Some of the constraints are long running and immediate solutions are impossible. These include supply of adequate electricity and R&D leading to innovation. If Nepal wants to have a strong industrial sector in the medium term (say 5 to 10 years from now), then the groundwork has to be started in a war footing. This should include urgent preparation of all the necessary policy, regulatory, legal and institutional frameworks. With an earnest dialogue and assessment of the (un)competitiveness of Nepali production among labor unions, employers and government, labor-industry relations can be improved. It would help in enhancing capacity utilization in the short-term itself.

Overall, political stability and good governance are paramount to effectively utilize the potential of our industries.
Posted by Chandan Sapkota at 12:03 PM 1 comment: