The state of energy security and access in Nepal

We often hear that Nepal has a huge potential (and possibly comparative advantage) in hydropower generation. So far this has been a trigger-happy statement that makes political leaders and bureaucrats smug about what Nepal has in store to usher the economy on a high growth path, and competitive production and manufacturing bases. Unfortunately, in reality, the country reels under increasing power cuts, sometimes reaching as high as 18 hours a day, during dry season. Amidst the increasing politicization of hydropower sector, weak institutions, and pockets of hostility toward investment originating from certain countries at a time when there is inadequate finance available to realize even a medium sized project, the competitiveness of economy is eroding and exports are declining, leading to a situation where high remittance inflows are providing a lifeline support to the economy. 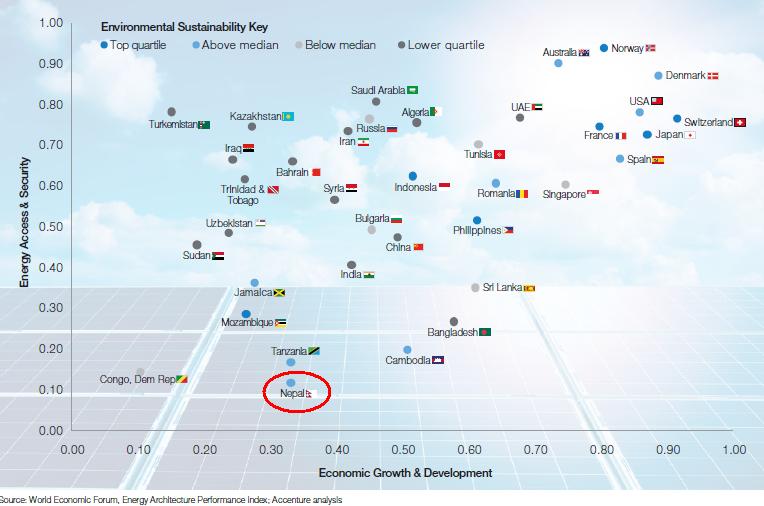 As of now, what is the state of energy security and access in Nepal, which has electrification rate of about 61.2%, the second lowest in South Asia region? It has the lowest electric power consumption in the region (91 per capita kWh).  The latest Global Energy Architecture Performance Index (EAPI) 2013 ranks Nepal 101 out of 105 countries in EAPI, which is composed of three sub-indices, namely economic growth and development (rank: 89— measured through the energy intensity, cost of energy imports, share of mineral products in export, and a combination of GDP per capita and HDI); environment sustainability (rank:13— measured through the carbon intensity of energy use, share of non-carbon energy sources in the energy mix, levels of outdoor air pollution, and water scarcity); and energy access and security (rank: 103— measured through import dependence, diversity of supply, quality of electricity supply, and access to modern forms of energy). In short, it shows that the state of energy security and access is pathetic in Nepal. It further reinforces the argument that Nepal needs to urgently ramp up investments in energy generation (largely hydropower) to achieve faster and inclusive economic growth and a competitive economic base. 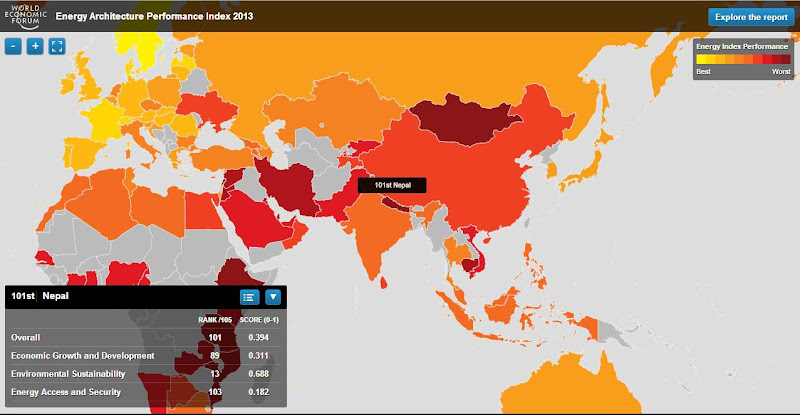 The top ranked nations are Norway, Sweden, France, Switzerland and New Zealand. From South Asia, India is ranked at 62, Sri Lanka 69, Pakistan 88, and Nepal 101. The energy architecture is defined as “the integrated physical system of energy sources, carriers and demand sectors shaped by business, government and civil society”.

The four mutually supportive pillars required for greater energy security and access are:
These are necessary to generate economic growth and development in an environmentally sustainable way while providing energy access and security for all.
Posted by Chandan Sapkota at 10:56 PM No comments: