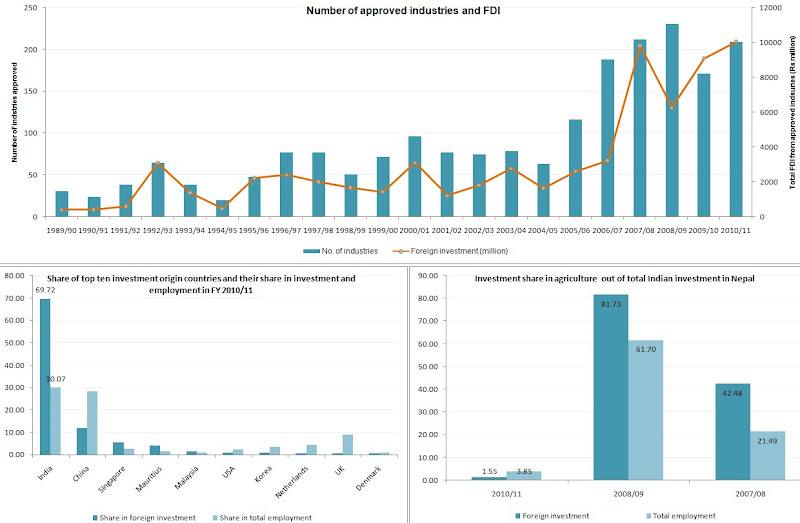 In the figure above, you can clearly see the surge in FDI immediately after liberalization of the economy in the early 1990s. It declined for the next two years and then increased for two years. The onset of Maoist insurgency and its gradual intensification led to decline in FDI up until 200/01, which it increased and then the total FDI inflows have been erratic up until 2004/05. Both FDI and employment generation are in upward trend since then. That said, the dent in 2008/09 might be because of the impact of global financial and economic crises.

If you are wondering about how Nepal stands wrt FDI inflows to regional nations, then the figures look disappointing. FDI inflows to Nepal in 2010 was just $38.99 million. In contrast, India’s was $24.64 billion. The latest (2011/12) FDI inflows to India  was a record FDI of $46.8 billion.

So, what are the main constraints to FDI inflows to Nepal? Some of them are:

For solutions, read this. (The hope is that the newly formed Nepal Investment Board will encourage investors to come to Nepal. Btw, does anyone have any idea about NIB’s website?)

Will flat cash incentives for exports work in Nepal?

The main purpose of cash incentives scheme is to increase exports and reduce trade deficit. Just by giving cash incentives won’t achieve this because the cash incentives received by exporters will hardly be reflected on the price of final exported items. Cash incentives are given after goods are exported and they do not necessarily boost price competitiveness. As of now it is a misplaced export incentive with too much bureaucratic hassles to claim cash (plus incongruous with other policies’ emphasis on domestic value addition together with employment generation).