Poverty in Nepal and South Asia based on $1.90 a day poverty line

The World Bank recently updated its global poverty line, which is now re-estimated at $1.90 a day, up from $1.25 a day earlier. Accordingly, poverty estimates for all countries have been revised, mostly downward. 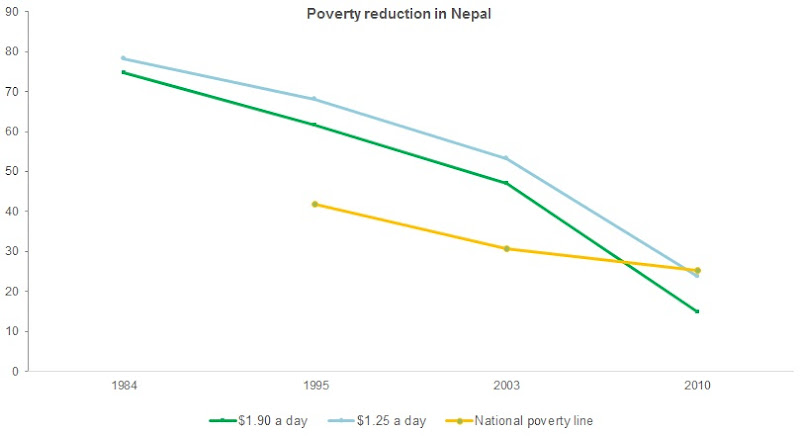 The estimates based on national poverty line, which is fixed at NRs 19,261 (NRs 11,929 for food items and NRs 7,332 for non-food items in 2011 prices) are the same. The estimates based on NLSS III data show that about 25.2% of the people lived below the national poverty line in 2010/11. Consumption basket was changed in this round of estimate, so it cannot be strictly compared to the previous estimates. See this for more and this for poverty by district. The major contributing factors for poverty reduction are remittance income (see here and here), higher agricultural wages, urbanization (mostly propelled by rural-urban migration) and investment in public services (education and healthcare, financed mostly by donors) (see here). It has hardly anything to do with economic growth.

Now, lets look at how the other South Asian economies fare with the re-estimated global poverty estimate. India has the highest poverty rate (21.3%) in South Asia, followed by Nepal and Pakistan. Overall, all countries have managed to lower poverty save the Maldives. 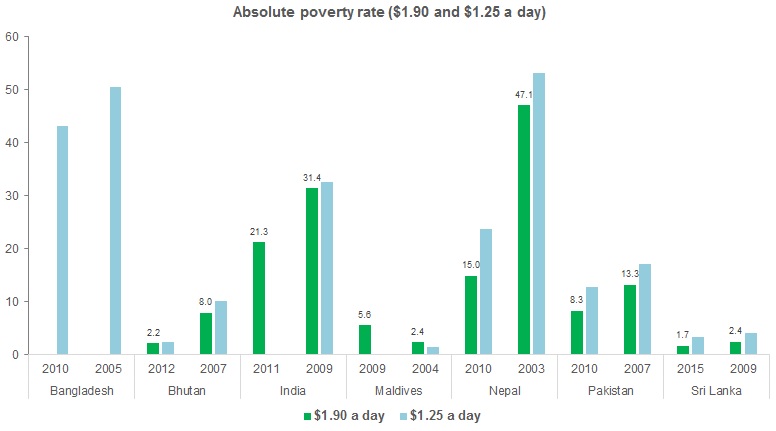 Nepal lowered inequality (as measured by Gini index based on consumption) from 43.3 in 2003 to 32.8 in 2010. Similarly, Bangladesh, the Maldives and Pakistan have marginally also lowered inequality. The most progress is achieved by Nepal. Inequality seems to have increased in Bhutan, India and Sri Lanka. 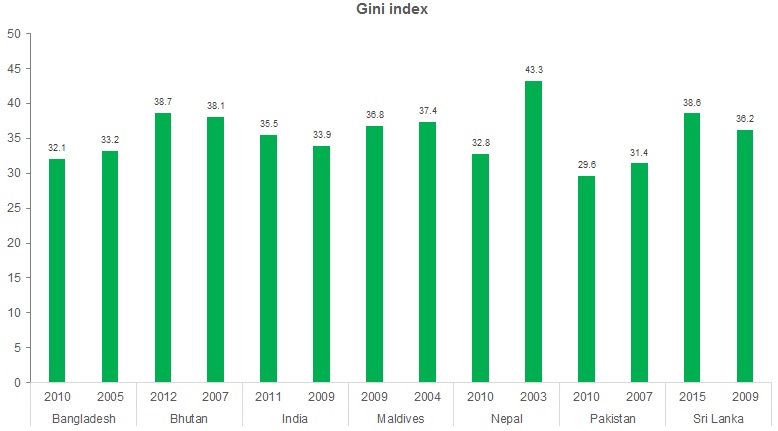 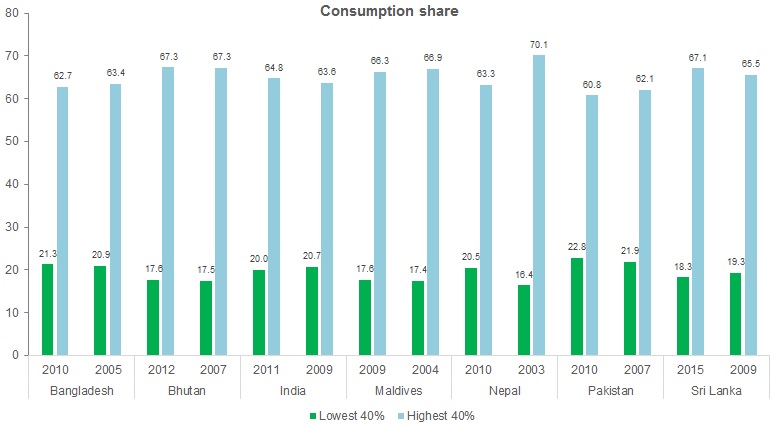 The new global poverty line is computed by taking the average of national poverty lines of the 15 poorest countries (Chad, Ethiopia, The Gambia, Ghana, Guinea-Bissau, Malawi, Mali, Mozambique, Nepal, Niger, Rwanda, Sierra Leone, Tajikistan, Tanzania and Uganda) in 2011 and then converted into US dollars using 2011 PPP. So, starting October 2015 the new global extreme poverty line is $1.90 a day. About 987 million people globally (14.2% of global population) lived under this line in 2012 and it is projected to drop to around 700 million in 2015. More here and here.

A bit of timeline of the global poverty estimates:

Posted by Chandan Sapkota at 2:45 PM No comments:

Deaton vs Friedman: Is income more volatile than consumption?

Angus Deaton was awarded the 2015 Nobel Prize in economics for his "analysis of consumption, poverty and welfare."  Here you can read about his work summarized and analyzed by the Nobel committee.

One of the micro-macro issues that Deaton tackled was if income was more volatile than consumption. Milton Friedman argued that people smooth consumption over time even if they experience temporary income shock (permanent income hypothesis). In other words, consumption is not as volatile as income. However, Deaton argued that it may not be the case if people expect several bouts of income increase. In this case, consumption would not be smooth. This is the Deaton Paradox, which comes from his analysis of household's income pattern and consumption behavior.

The Economist summarizes this:

But Mr Deaton’s work exposed this as sloppy thinking. First, he noted that the relationship between consumption and income in Friedman’s model depended on the kinds of income shocks hitting an economy. If one pay rise acts as a signal that there are more to come, then the “rational” agent in Mr Friedman’s model should anticipate future increases, and spend even more than their initial income boost. In this case, consumption should be more volatile than income, not the other way round.

So indeed it proved. Mr Deaton examined the aggregate income data more carefully, and found that it did not seem to support the idea of consumption smoothing. His microeconomic theory, allied with his empirical observations about aggregate income, together implied that income should be smoother than consumption, in contrast to what the macroeconomists had been trying to explain in the first place. This inconsistency was the Deaton paradox.

And some word of advise to economists:

As well as his specific contributions to our understanding of the world, Mr Deaton offers three lessons to aspiring economists. First, the theory should tally with the data—but if not, then do not despair. Puzzles and inconsistencies help to prompt innovation. Second, the average is rarely good enough. It is only by understanding differences between people that we can understand the whole. Finally, measurement matters. In the words of Mr Deaton, “progress cannot be coherently discussed without definitions and supporting evidence”. In the words of Mr Muellbauer, Mr Deaton’s win is “a triumph for evidence-based economics”.

Posted by Chandan Sapkota at 10:48 AM No comments: