Who gets the fuel subsidy in reality?

Nepal Oil Corporation (NOC) is one of the largest loss making public enterprises in Nepal. In FY2012, NOC losses amounted to NRs9.5 billion (0.6% of GDP). It is practically operating with a negative net worth given the amount of debt it owes to EPF, CIF, the government and certain commercial banks. The NOC is the only entity in Nepal that is allowed to purchase petroleum fuel and LP gas from Indian Oil Corporation (IOC) and sell it in Nepal through private dealers. The irony is that it procures petroleum fuel at its own cost, but is forced to sell it at the price fixed by the government. 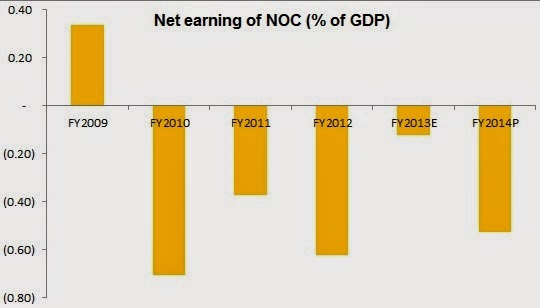 With such a pricing/institutional arrangement, the NOC is forced to sell petroleum fuel below the cost price, especially in the case of diesel and LP gas. The retail prices that do not fully reflect the NOC’s cost combined with the lack of dedicated government fund for that purpose mean that the NOC is forced to subsidize diesel and LP gas from its own purse. The losses accumulate to such an extent that the NOC is unable to pay the IOC, which then reduces fuel supplies. A severe shortage follows quickly, leading to rationing of fuel and LP gas through certain petrol pumps and retail shops. The shortage and ensuing uncertainty lead to rise in price of other goods and services as well (i.e. inflationary expectations push up prices after a lag of one to two weeks).

When the situation becomes unbearable, the government hastily arranges (plus guarantees) loans to NOC from the two large pension funds and commercial banks. At times, it is also followed by administered price hikes, resulting in protests and even bandhs (strikes) demanding rollback of such price hikes. Since it is politically sensitive and unpopular, the government refrains from allowing the NOC to harmonize domestic fuel prices with international prices (or its buying cost). There have cases where the same political parties have favored price hikes while in power, but opposed such moves while sitting on the opposition bench. 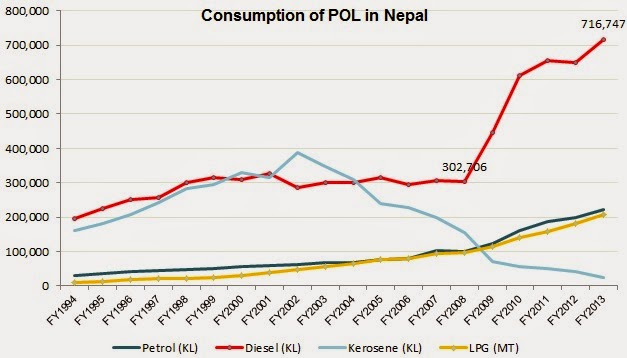 Now, the question is: Are the subsidies on diesel and LP gas justified? While a lot of the public transportation runs on diesel, increase in its price would trigger a sort of chain reaction: public fares go up, freight charges go up, prices of regular goods and services go up, salary and allowance go up, real interest becomes negative, investors get worries, etc. The underlying reason is that folks from across the consumption quintile use diesel for one or the other purpose and feel the heat. 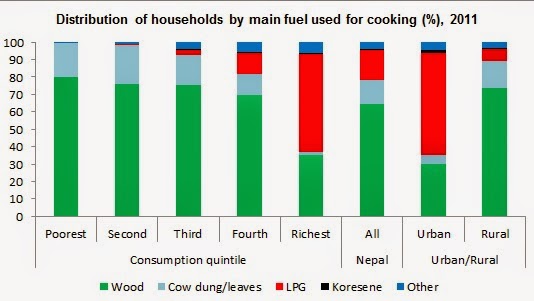 The irony is that every time administered fuel and LP gas prices are raised, student associations in public campuses (mostly affiliated to political parties) protest against it by clashing with police and by organizing bandhs (strikes) arguing that such hikes hurt the poor the most. However, statistics show otherwise. Knowingly or unknowingly, their protests, if successful in rolling back price hikes, seem to be favoring the richest households! It is baffling to a rational observer when the same folks do not mind spending NRs1200 or so on a bottle of whiskey (or any non-essential goods including beer, cold drinks and cigarette) each week, but vehemently oppose price hikes of just 10%-20% on LP gas. If NOC is allowed to adjust retail prices that reflect its buying cost, then the market would not see frequent bouts of shortages.

That said, few things need to happen with regard to NOC’s financial woes and regular fuel supplies:
A marginal hike in administered fuel prices makes a huge difference in NOC’s balance sheet. For instance, the rise in administered fuel price and the decrease in oil price in the international market in FY2013 reduced NOC’s losses to NRs2.1 billion from NRs9.5 billion a year earlier. As consumption increased together with longer load-shedding hours, the government is projecting losses of about NRs10.2 billion (0.5% of GDP) in FY2014.
Posted by Chandan Sapkota at 9:31 AM No comments: