Government to set up ‘Immediate Problem Solving Centre’ at PMO

From The Kathmandu Post: The government is set establish an Immediate Problem Solving Centre at the Prime Minister’s Office (PMO) in order to address legal, institutional and administrative issues at priority projects and service delivery of the government agencies. The centre, to be known as ‘Action Room’, will have a separate set of staff under the PMO secretary. Armed with video conferencing and telephony facilities, the centre will allow the prime minister to instruct the ministers, secretaries and project chiefs directly to instantly address the issues that arise in key priority projects and service delivery, according to PMO officials.

The PMO action room will help solve the problems at different ministries through cross-ministry coordination, among others. “In fact, the action room will be developed as a body to keep tabs on the monitoring bodies in the ministries to ensure timely completion of project works and service delivery,” said a PMO official.  The PMO is looking for space to setting up the action room. It has already arranged a team of staff, including a secretary, a joint-secretary, an under-secretary and three section officers. It plans to add some technical staff. The government is drafting a regulation to govern operations of the action room and establish a mechanism for monitoring and solving problems at the ministry levels.
NRA work stalls without a CEO

From The Kathmandu Post: The process of extending deadline for obtaining second tranche of housing grant has been in limbo as the National Reconstruction Authority (NRA) is without Chief Executive Officer. Yubaraj Bhusal had stepped down as the NRA chief in the second week of July, following the Oli-government’s decision on July 5 to revoke all the political appointments made by the erstwhile government led by Sher Bahadur Deuba after August 30, 2017.

A meeting of the NRA Advisory Council scheduled on July 6, which was supposed to take call over the matter, did not convene due to the government decision which had revoked the appointment of NRA CEO. NRA Deputy Spokesperson Manohar Ghimire said, “There would certainly be repercussions over the top position at the NRA which is vacant at the moment. There are a number of issues that need to be resolved,”

A frequent change in NRA leadership due to political meddling has severely hit the reconstruction process even though three years have passed since the horrifying disaster struck the country that killed nearly 9,000 lives, leaving tens of thousands homeless. The authority had set mid-July 2018 deadline for quake survivors to obtain Rs150,000—the biggest chunk in Rs300,000 housing reconstruction aid handed out by the government.

According to the agency mandated to carry out the reconstruction works post the Gorkha Earthquake, around 250,000 households have yet to receive second tranche of the government aid. Following the earthquake, the government decided to provide Rs200,000 per household in private housing rebuilding aid. It later increased it to Rs300,000 to be distributed in three installments—Rs 50,000, Rs 150,000 and Rs 100,000. The NRA also has to address several other issues urgently as the meeting of the NRA Advisory Council and Steering Committee cannot convene in the absence of chief executive.

From The Himalayan Times: The government has approved the proposal to form an infrastructure development bank under Chinese investment. A Cabinet meeting recently agreed in principle to form such a mega bank under Chinese investment, which will have paid-up capital of Rs 100 billion, informed Rajan Khanal, secretary at the Ministry of Finance (MoF). Following the Cabinet’s nod, MoF is currently holding bilateral discussions with China to set up the bank as soon as possible. The Chinese-investment bank needs to have at least 20 per cent domestic share.

From myRepublica: The government treasury is now empty following irrational budget distribution at the end of the fiscal year that ended Monday. Not a single penny has been left from the previous fiscal year , according to officials of the Ministry of Finance (MoF). This fiscal indiscipline on the part of the current government is sure to have serious consequences as it may trigger internal borrowing right from the first month, just as the previous government had done this time last year. The internal borrowing may exert further pressure on cash available for lending in the banking sector, shrinking the growth of the private sector, said two MoF officials who have direct knowledge of the matter.

The government spent about 33 percent of the total allocated budget for development purposes of Rs 335 billion, or Rs 110 billion, in the 12th month . A total of Rs 27 billion was paid out for the purpose on a single day in the last month. Overall payment by the government in the last month (mid-June to Mid-July) hovered at around 28 percent of the total budget of Rs 1,278. Economists have criticized this eleventh hour spending, questioning the motives and rationale.

The pressure on the government has already started as it has to disburse immediately a total of Rs 78.66 billion-- Rs 21 billion for provinces and Rs 57.66 billion for the local levels-- as part of conditional grants, and these were payable on Tuesday, the first day of the fiscal year. The government needs further disbursements of Rs 16.76 billion and Rs 45.16 billion by August 10 to the provinces and local levels respectively as equalization grants . “Government has no choice but go for internal burrowing as early as possible,” added an official. In a change from the past year, the payment of equalization grants was separated and scheduled on August 10 in order to evade pressure for fiscal transfers to subnational governments in the Appropriation Act 2075.
Posted by Chandan Sapkota at 8:05 AM No comments:

Import-based revenue account for 45% of tax revenue in Nepal

Finance ministers in their budget speech focus exclusively on two issues: new or augmented expenditure programs and revenue mobilization plan to cover additional expenditure without drastically increasing budget deficit (although this and previous finance ministers unveiled budgets with larger-than-expected deficits). Implementable reform measures to enhance public service delivery and effective budget execution are usually missing or mentioned cursorily. The core focus of expenditure plan and associated reform measures are to attain high and inclusive economic growth by transitioning the remittance and monsoon based economy to a one that is based on more robust sources of growth (industrialization, commercial agriculture, tourism, innovation, etc). For this, the government requires both revenue and knowledge transfer (comes usually with foreign grants, loans and investment).

However, meeting revenue target supersedes all other objectives of MOF (which sometimes is labelled Ministry of Revenue instead of Finance). The strategy for meeting ever-higher revenue target is dependent on import related taxes and duties, and revenue administration’s efficacy. The core strategy of raising more revenue from duties on imports to finance an ever-increasing expenditure plan that aims to change the structure of the economy is at some level self-defeating (unless the expenditure plan, i.e. budget execution, is realized faster than expected to create a base for generating higher non-trade/import related revenue). Else, we are always at the mercy of remittance income! 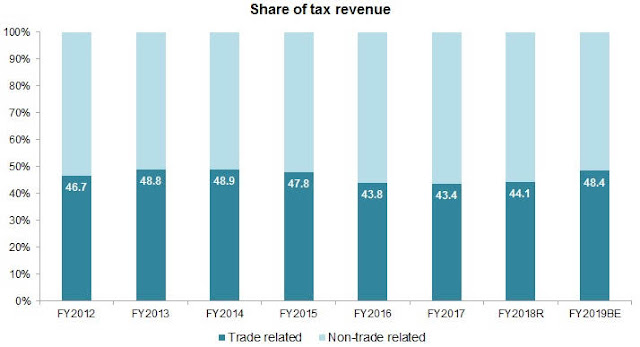 Import related revenue increased from 6.5% of GDP in FY2012 to 9.6% of GDP in FY2018. It is projected to be about 11.6% of GDP in FY2019.  This indicates how much the economy is reliant on import-based revenue to finance its rising expenditure. As long as imports are increasing, largely financed by remittance income, tax revenue will continue to rise. It will rise even more if excise duties on some imported goods are increased. There isn’t much room to raise trade/custom tariffs due to various multilateral and bilateral treaties. 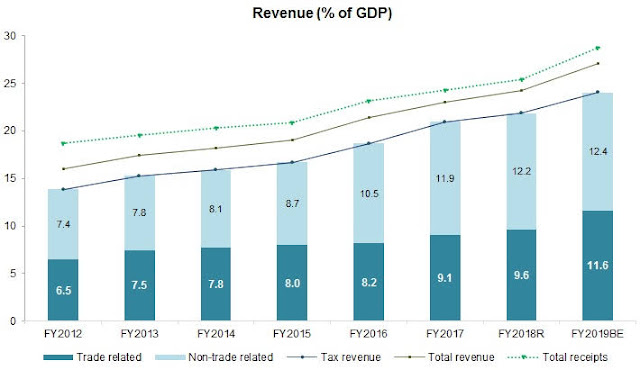 Total expenditure was about 34.8% of GDP (23.3%, 7.9% and 3.6% as recurrent, capital and financial provision expenditures, respectively). From FY2019 onward, federal government has to share 30% of VAT and 30% of domestic excise duty collections with subnational governments (it further squeezes available revenue sources and without a reduction in expenditure, it increases federal budget deficit).
Posted by Chandan Sapkota at 8:40 AM No comments: