The past few decades have seen important shifts that have reshaped the global trade landscape. As a share of global output, trade is now at almost three times the level in the early 1950s, in large part driven by the integration of rapidly growing emerging market economies (EMEs). The expansion in trade is mostly accounted for by growth in noncommodity exports, especially of high-technology products such as computers and electronics. It is also characterized by a growing role of global supply chains and an ongoing shift of technology content toward EMEs. These developments in global trade have been associated with growing trade interconnectedness and carry important implications for trade patterns, in particular in response to relative price changes. The aim of this paper is to outline the factors underlying these changes and analyze their implications for the outlook for global trade patterns.

Here is the full paper. The paper states that the expansion of global and regional trade was driven by trade liberalization, followed by vertical specialization and income convergence. Lower trade barriers and technology-led declines in transportation and communication costs facilitated regional and global supply chains. Meanwhile, convergence in income levels and factor endowments across countries pushed up trade, especially that of intra-industry trade.

The expansion in global (merchandise) trade is characterized by three trends

Note that there is a difference in export contents of advanced and emerging market economies: advanced economies have less foreign (import) content in their exports and contribute towards other countries’ exports content, but EMEs tend to have relatively large shares of imported content in their exports (especially of those that involve heavily in assembly and processing trade). This affects sensitivity of trade patterns to relative price changes. The paper states that Asian supply chain is more dispersed compared to those in North America or Europe, rendering it more vulnerable to disruptions in trade flows. Also, check out the argument for judging trade and competition based on value-added during each step of manufacturing process than total value of final products imported or exported from countries. 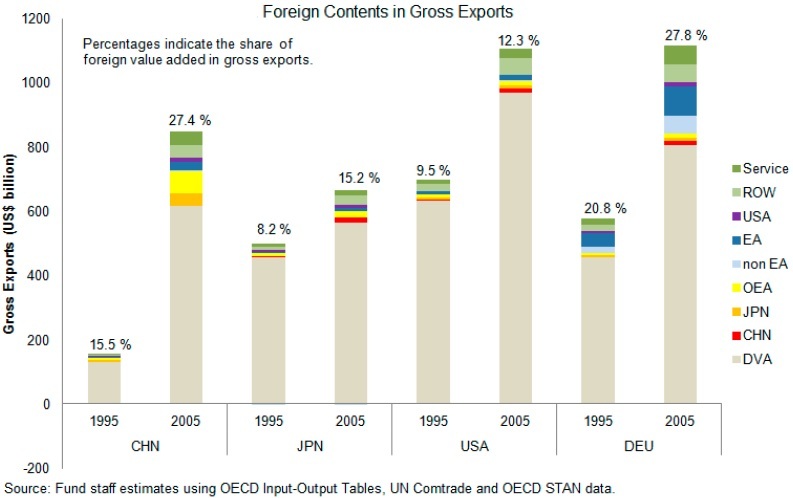 The figure below shows trade interconnectedness between Japan and China and other countries from where it imports contents for its exports. The emergence of China as a global trade hub (and its prominence over Japan in over a decade) is clearly visible. 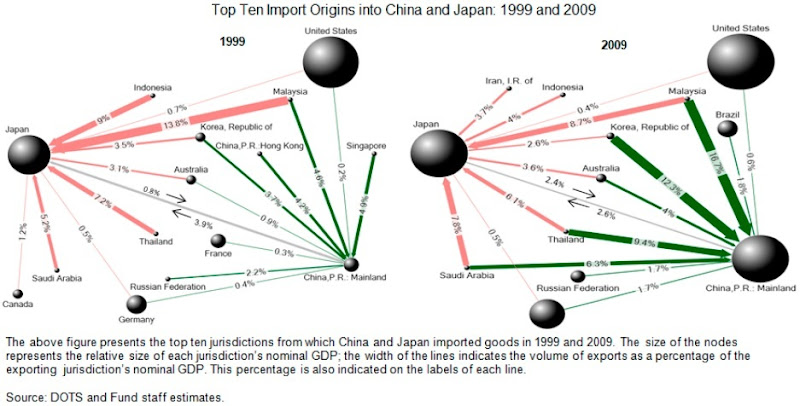 Posted by Chandan Sapkota at 5:19 PM No comments: