Melamchi and the mismanaged KUKL

Once known for its financial and administrative mismanagement, Nepal Electricity Authority (NEA) is now the most talked about public enterprise that is giving hope of a bright future. Apart from the scheduled electricity generation and additional import from India, drastically reducing load-shedding would not have been possible without the administrative acumen of NEA’s Managing Director Kul Man Ghising, unflinching support by a majority of the board of directors, and strong support by Energy Minister Janardan Sharma.

Meanwhile, gross negligence by management, especially the chairman of the board of directors, and excessive political interference is turning Kathmandu Upatyaka Khanepani Limited (KUKL) into a new basket case of administrative and financial mismanagement. It is an alarming development requiring urgent attention of and intervention by the government. Else, the dream of channelling Melamchi’s water through the dry taps in Kathmandu will continue to remain a daydream despite the fact that the main tunnel work is going to be completed by 2017.

NEA as a model

After the Nepal Oil Corporation, NEA is probably the second-most decried and politically interfered public enterprise in Nepal. The combined financial loss—a direct product of administrative mess, political interference and a mismatch between cost and retail prices—of these two enterprises was about 0.7 percent of gross domestic product (GDP) in FY2014. The intermittent petroleum shortages and prolonged load-shedding was throwing regular life out of gear. Fortunately, the low oil prices in the international market and its ability to still charge high prices in the domestic market was a blessing in disguise for the NOC, which despite being embroiled in an administrative mess and political interference through the labour unions, has turned its negative balance sheet positive in the matter of a year.

The case with NEA is different though. It continues to have a negative balance sheet, generating loss amounting to about 0.6 percent of GDP in FY2016. The administrative, political and union related troubles continue to beset its financial health and public service delivery. It cannot revise upward retail electricity prices like the NOC and continues to sell electricity below the cost of production. Hence, the government’s decision to write off 26.5 billion rupees of accumulated debt in 2011 was not enough to turn around its negative balance sheet.

But NOC is still a lost cause, given its core troubles despite the improved financials thanks to external factors. But NEA is a beacon of hope despite its bad financials thanks to a capable managing director and the backing of the board of directors. The tireless effort, management shrewdness, and commendable drive to achieve allocative efficiency have led to a drastic reduction in power cuts, making the public and the business community happy.

The kind of overhaul seen in NEA and its recent improvement in service need to be replicated in KUKL. KUKL is a semi-public organisation tasked with managing water supply distribution and sewer systems (including treatment plants) in Kathmandu. To avoid the fate of a failing public enterprise, KUKL was established as a public company, which could loosely operate like a public-private-partnership (PPP) entity. Although the private sector collectively has just a 15 percent share, it is nevertheless allowed to head the board and have an important say on key issues. While this was done in good faith, given the mess with public enterprises, it is becoming a bane for the future of KUKL.

A political, inefficient and carefree chairman of the board of directors (from the private sector) is trying to prolong his tenure and blocking human resources and administrative reforms that are required to enable KUKL to distribute and manage water from Melamchi, which is expected to be completed by 2017. Finishing Melamchi’s tunnel work and channelling water to Kathmandu is only half the story. Efficient management and distribution of over 300 million litres of water per day is the other equally important half of the story.

Kathmandu’s water woes will not end unless the government intervenes in order to mend three core issues: address current staffing; remove the obstructionist chair of board of directors; and stop political interference in personnel hiring and in putting water supply lobbyists (water bottlers and tankers suppliers) above KUKL’s interests.

KUKL should hire competent staff for the vacant positions and replace personnel who do not have the required abilities. These include engineers of varying skills, machine operators, mid-to-senior level sectoral management staff, and overseers. The current general manager is not getting timely and appropriate cooperation from the board chair to fill these positions and enhance capacity of the existing ones. It will affect service delivery of KUKL.

Furthermore, the current board chair is staying beyond his term limit by coaxing politicians, delaying annual general meetings (which have not taken place since 2014), and making KULK a dumping ground for employing politically affiliated personnel. An uncooperative board chair—who has been on KUKL’s board since 2008 and chairman since 2014—with no respect for corporate governance, and who interferes in day-to-day administrative issues can virtually immobilise other management staff, including its competent general manager. The current board chair, who has even lost confidence in his fellow board members, needs to be booted out of KUKL.

KULK’s annual general meeting is scheduled for the third week of January. The government should use its rightful authority and coerce the board chairman out of KUKL. Furthermore, the two large private sector umbrella organisations that are represented in the board of directors of KUKL need to behave as professional private sector players and not do the bidding of politicians and lobbyists. The private sector representation is failing to deliver the kind of management skills and visionary leadership expected of them at KUKL.

KUKL needs the recent NEA-type management, ie a competent and respected managing director or general manager fully backed by the board of directors, to ensure that Melamchi water is timely and efficiently distributed to the people of Kathmandu.

Posted by Chandan Sapkota at 12:38 PM No comments:

Growth prospects for Nepal and India in FY2017

Here are the major highlights from Global Economic Prospects January 2017:

Global growth is estimated at 2.3% in 2016 and is projected to grow marginally to 2.7% in 2017 due to “receding obstacles to activity in commodity exporters and solid domestic demand in commodity importers”. 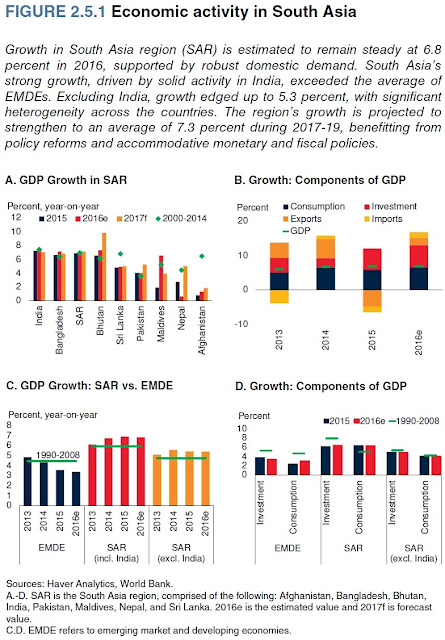 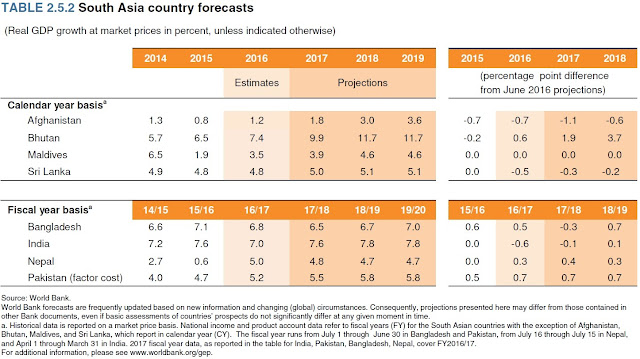 The mission expects growth to reach 5.5 percent in FY 2016/17 (ending July 15). The normalization of economic activity is being supported by a good monsoon, accommodative monetary policy, and rising government spending. India’s sudden withdrawal of high-denomination banknotes is expected to have a limited impact on activity overall; bank holdings of Indian rupee currency are small but some corporates and households who hold such notes have seen their purchasing power affected. The main risk to the outlook pertains to failure of capital budget implementation to improve.

The normalization of prices in the aftermath of last year’s trade disruption is pushing down inflation which is expected to undershoot the authorities’ mid-2017 inflation target of 7.5 percent.

Posted by Chandan Sapkota at 1:32 PM No comments: