NREGA is a flagship rural employment generation and livelihood program of the UPA government in India. This social welfare program guarantees one hundred days of employment per year at the prevailing minimum wage rate for unskilled labor.

The Act[1] came into force on February 2, 2006 with an aim to “directly touch lives of the poor and promote inclusive growth.” Along with the objectives of boosting rural economy and enhancing overall (inclusive) economic growth, this public works program was also designed to prop up purchasing power of poor people; stabilize their household income; assure livelihood security to the most marginalized groups; accelerate the pace of meeting the MDGs; and strengthen natural resource management through works that address causes of chronic poverty like drought, deforestation and soil erosion. One of the objectives of the program is to make the process of employment generation sustainable.

It started with a pilot project in the state of Maharashtra in 1965 with an aim to provide relief to poor farmers during famine and drought. An Employment Guarantee Scheme (EGS) Act was passed in 1979 by the state legislature, widening the reach of the pilot program to the entire state. The federal government picked upon the success of the program and implemented (under Phase I) it in 200 of the most backward districts on February 2, 2006. It was expanded to cover an additional 130 districts in 2007/2008 (under Phase II) and the remaining (under Phase III) 285 districts (in total 615 rural districts) on April 1, 2008.[2] In 34 states, a total of 45,019,215 households (as of September 2, 2009) were provided employment in 2008/09.[3] 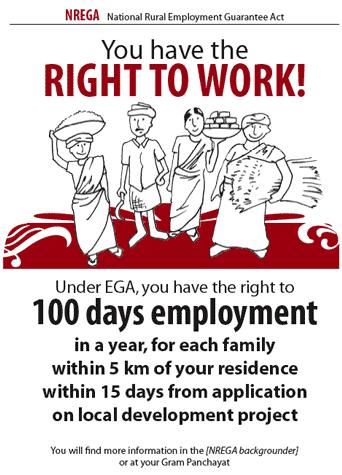 [4] ODI, Inter-Regional Inequality Facility. "The Maharastra Employment Guarantee Scheme." ODI Policy Brief 6 (2006): 1-4.; Note that if employment place is not within a radius 5 km, transport allowance and 10 percent extra living allowance is provided. This also deters women from actively participating in the program.

Posted by Chandan Sapkota at 2:58 AM No comments: