The World Development Report 2009 is titled Reshaping Economic Geography.The gist of the report: growth is unbalanced but development can be inclusive…to promote long-term growth policies should be designed to facilitate concentration and economic integration, both within and across countries. Overview of the report here. Full text Part 1 and Part 2

The report warns that trying to fight markets just because it is unfavorable to certain sectors and groups is tantamount to fighting prosperity. Let markets do its function and governments facilitate geographic concentration of production. That being said, governments should institute policies that make provision of basic needs- of schools, security, streets, and sanitation- more universal, the report recommends.

“Lagging and leading places can be brought closer economically by unleashing the market forces of agglomeration, migration and specialization, as we have seen in North America, Western Europe, and East Asia, where intra-industry trade has powered prosperity,” said Justin Lin, World Bank Chief Economist and Senior Vice President, Development Economics. “How well markets and governments work together to harness these forces will determine the wealth of cities, provinces, and nations.”

Trying to spread out economic activity can hinder growth and does little to fight poverty. For rapid, shared growth, governments must promote economic integration which, at its core, is about the mobility of people, products, and ideas.

“In a world where economic concentration is a fact of life, governments should improve land policies, provide basic services everywhere and invest efficiently in infrastructure,” said Katherine Sierra, Vice President, Sustainable Development. “As the WDR shows, incentives intended to attract industry to lagging areas should be used sparingly.”

The WDR reframes the policy debates to include all the instruments of integration—common institutions, connective infrastructure, and targeted interventions. By common institutions, the report means regulations affecting land, labor and commerce, and social services such as education and health financed through taxes and transfers. Infrastructure refers to roads, railways, ports, airports, and communications systems. Interventions include slum clearance programs, special tax incentives to firms, and preferential trade access for poor countries.

This report is related to Nobel laureate Paul Krugman’s work on New Economic Geography and the discussion about increasing returns and transportation costs. I had written an Op-ed about how policies can be designed so that governments can facilitate concentration and agglomeration in the Nepali economy, which has seen massive concentration of industries in few places while leaving other areas at bay. My main policy recommendation in the Op-ed was: invest in transportation and infrastructure and facilitate credits to companies willing to invest in new areas. This report kind of challenges this argument saying that trying to “spread out economic activity can hinder growth and does little to help poverty”. Well, without investing in transportation, domestic integration is not possible in countries like Nepal. And, if money is invested in transportation infrastructure, then lower per unit transportation costs will help spread the concentration of industries. It does not necessarily mean that this will thin out already existing concentration.

In short, the report says: promote concentration and let markets work but also engage in welfare programs so that those unaffected by markets are taken care of. Let growth be unbalanced, but effective policies will make development inclusive. Also, the report flatly states that the world is not flat (on page 8 of extended summary)…I wonder how Thomas Friedman would review this report.

More about the report here and here. 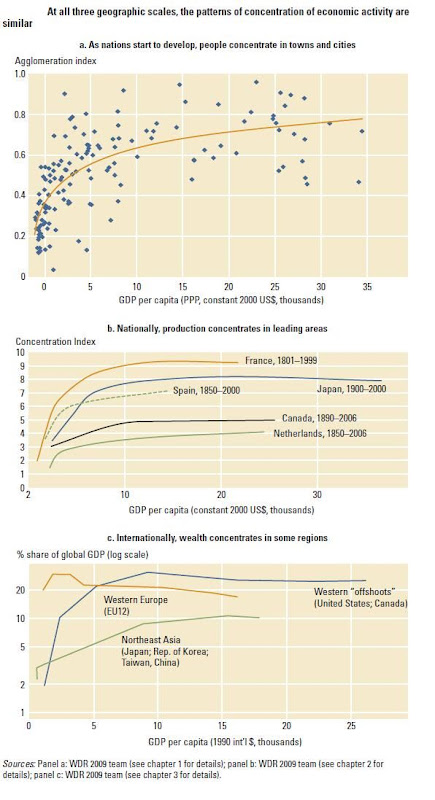 Posted by Chandan Sapkota at 2:23 AM No comments: