A joint report (Benefits of Trade for Employment and Growth) by the OECD, the ILO, the WTO and the WB, prepared for leaders attending the G20 Summit in Seoul, states that while open trade is always good, it must be complemented by properly designed domestic policies, including employment and social protection policies to ensure that benefits from trade are widely shared. While the crisis has limited growth in many countries, this should not be a reason to go for trade protectionist policies. Instead, trade should be kept open and it should be backed up by social security policies.

The economic crisis showed how open economies are exposed to external shocks, the report adds. But openness to trade also helps economies recover more quickly as they are more adaptable and less dependent on limited domestic demand.

Trade is contributing to the economic recovery. But with high unemployment persisting in many countries, governments must resist protectionism, the organizations say. They underscored that a successful conclusion to the Doha Development Agenda would send a positive signal that governments continue to oppose protectionism and seek new opportunities for growth, development and job creation through trade.

For open trade to boost growth and jobs on a sustained basis, complementary policies to address adjustment problems and distributional concerns are needed to help workers who may lose their jobs as a result of increased international competition. Relevant measures include stable macroeconomic policies, effective labor market and social protection policies, investment in education and enhancing export sectors in developing countries. 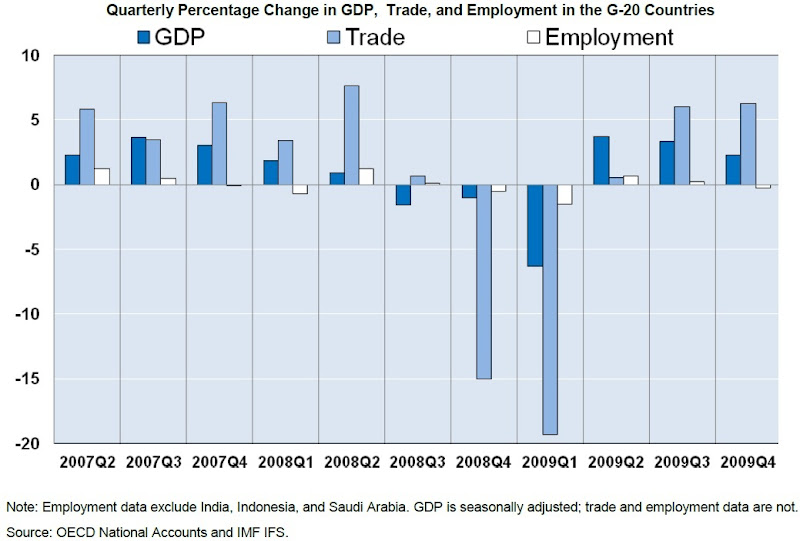 While batting for the case of free trade, the report points out a study about NAFTA’s impact on Mexico that finds that on average a 10% reduction in tariffs led to productivity growth of 4-8%. Also, it cites an OECD (2003) study that shows that over the long term, an increase in 10% in trade exposure (trade as a percentage of GDP) was associated with a 4% increase in output per working-age person. However, this report by Eduardo Zepeda et al (2010) shows that under NAFTA, Mexico’s annual growth of GDP per capita has stagnated; there is not much change in total investment; macroeconomic vulnerability has increased; and progress in job growth has been weak. NAFTA’s promise of broad-based dynamic growth has fallen short of its stated goals. So, even if trade as a percentage of GDP increased, economic growth rate was very low. Nepal has one of the highest degree of trade openness (as a percentage of GDP), but its growth is stunted for years now.

While the studies cited in the report are making valid points, evidence of to its contrary should also be heeded. It means that government should be thinking of why the same expected results were not seen in other countries despite similar trade openness policies. The prerequisites for translating trade openness’s positive impact on growth are missing in many developing countries. The developed countries who vouch for more trade openness should ensure that there is ample funding to institute the required prerequisites in the developing countries, who ideally would get funding based on their initiation on trade openness. There is Aid for Trade and EIF for LDCs facilities in the WTO regime. But, it looks like a sympathetic gesture to quiet the disquiet voice in trade negotiations. It should be seriously thought of in terms of sufficient funding, technology transfer, capacity building, infrastructure, etc.

Also, check out the latest simulation result of changes in employment and real incomes  following good liberalization under the assumption that the G-20 countries implement a 50% MFN tariff reduction and reduce NTB by 50% on an MFN basis. South Korea, China, India, and Thailand benefit the most in terms of increase in real income in the long run. Mexico is going to lose. 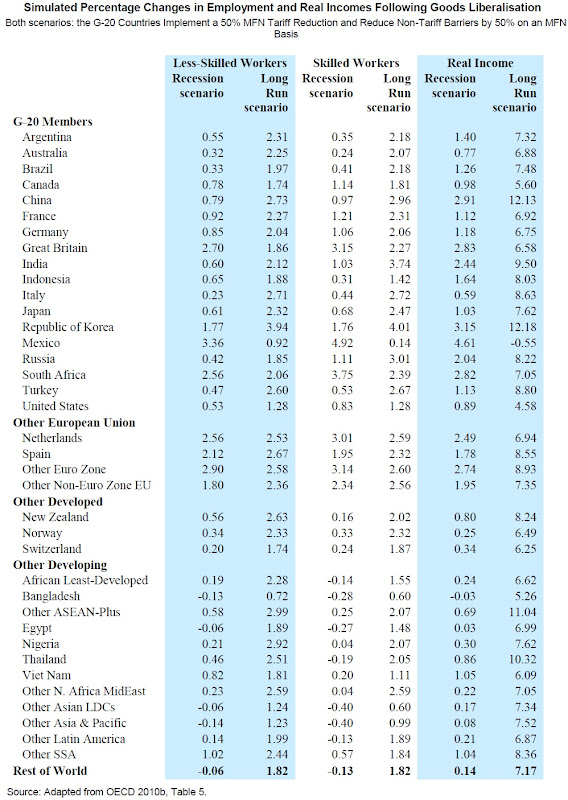 Posted by Chandan Sapkota at 10:08 AM No comments: