Car Transport in Nepal in 1948 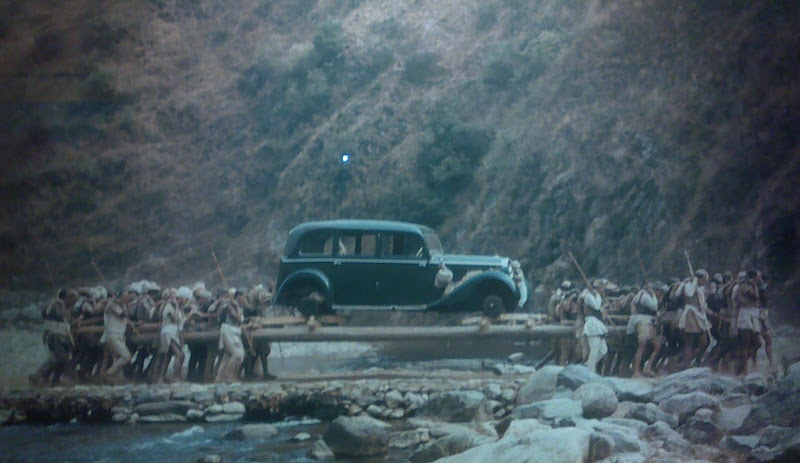 “Instead of cars carrying workers, Nepal has workers carrying cars on the rocky, hilly trails of the country. Here automobiles, stripped of wheels and bumpers, are shoulder-borne to and from Kathmandu, the only Nepalese city with modern roads. Some 80 coolies, moving to the rhythm of a chant, balance it on long poles, heavier than the car itself.”

“This German-made Mercedes Benz is of the same series, made between 1936 and 1940, as the one given to King Tribhuvan by Adolf Hilter, which is now at the Narayanhiti Palace Museum.”

Since the luxurious lifestyle, at the expense of poor Nepali people, of the autocratic Rana regime, the country has come a long way. There are better roads, though still in short supply. However, it seems vehicles are not in short supply. The supply of vehicles has not matched with the supply of road infrastructure, i.e. the growth rate of vehicles plying on the roads of Nepal is far higher than the growth rate of new road infrastructure. This disequilibrium has led to traffic congestion and created supply bottlenecks. Note that infrastructure has been one of the most binding constraints to economic activities in Nepal. Well, things are changing now. Hopefully, the policymakers will properly address the binding constraints in the coming days.

William Cline (2007) argues that climate change will have potentially severe agricultural damages in developing countries, but milder effects in rich countries. He shows that under business as usual approach (refers to a situation where there is the absence of serious international programs of emissions taxes or restraints) the aggregate world agricultural impact will be negative by late this century. The damages will be disproportionately concentrated in developing countries. (This blog post contain the main points of Cline’s book.)

He argues that temperatures in developing countries are already close to or beyond thresholds at which further warming will reduce agricultural potential. Since a large proportion of population depends on agriculture, a given percentage loss in agricultural potential would impose a larger proportionate income loss in developing countries.The magnitude of global land surface warming by the 2080s under business as usual warming would be 4.4°C (weighting by farm area), and precipitation would rise only 2.9 percent. This combination would go far beyond optimal temperatures in the low latitudes and also in the mid-latitudes.

Cline uses agricultural impact models of two separate types: Ricardian statistical economic models, and process-based agronomic crop models, combined with leading climate model projections to estimate effects on agriculture on over 100 countries. He develops a “consensus” set of geographically detailed estimates for changes in temperature and precipitation by the 2080s and applies these climatic changes to the agricultural impact models.

Two fundamental conclusions of the study:

(Carbon fertilization: The enhancement of the growth of plants as a result of increased atmospheric carbon dioxide concentration, resulting from the fact that CO2 is an input into the process of photosynthesis.)

There are a lot of estimates about the potential impact of climate change on agriculture. The estimates are derived with varying assumptions of warming and models. Cline derives a “consensus” approach to come up with his own estimates. Africa will suffer the most.

A prudent range for impact on global agricultural capacity by the 2080s could easily involve greater damage than the direct preferred estimates in this study and could perhaps lie in the range of reductions of 10 to 25 percent. Even if global productive potential were cut by only 3 percent, the results find an inequitable distribution of the effects, driven by the fact that the poor countries tend to be located in lower latitudes, where temperatures are already at or above optimal levels.

On average developing countries would suffer losses of 9 percent and median losses for these countries would amount to 15 percent. Confirming previous studies, the results here indicate that the losses would be most severe in Africa (estimated here at 17 percent average loss and 18 percent median loss in agricultural capacity) and Latin America (13 percent average and 16 percent median loss). The losses would be much larger if the benefits from carbon fertilization failed to materialize (averaging about 21 percent for all developing countries, 28 percent for Africa, and 24 percent for Latin America).

For Australia, one of the two steadfast opponents of the principal international initiative to date against global warming (the Kyoto Protocol), the results also suggest that a more positive position on global warming abatement would be in its long-term interests. The estimates for Australia indicate losses of around 16 percent even with carbon fertilization (with potentially much larger losses suggested by the Ricardian estimates). As for the United States, the other principal opponent, although the estimates show an aggregate gain of 8 percent in the case with carbon fertilization, they indicate a comparable loss (6 percent) if carbon fertilization is excluded. Moreover, regional losses are pronounced: by about 30 to 35 percent in the Southeast and in the Southwest Plains, if carbon fertilization is excluded (and about 20 to 25 percent if it is included; table 5.8).

For an initial phase of modest global warming, average impacts on agriculture are ambiguous and may be benign globally on average, but it would be a serious mistake to infer from such a diagnosis that little should be done to curb climate change. Moreover, it would be a serious mistake to downplay the risks of future agricultural losses from global warming on grounds that technological change, for example in new seed varieties, will offset any negative climatic effects.

Posted by Chandan Sapkota at 9:30 AM No comments: