Industrial policy is used to encourage exports, attract FDI, promote innovation and pick winners in selective industries with high export potentials. How can the government best intervene so industrial policy can achieve its intended goals? Harrison and Rodriguez-Clare argue that this can be done by pursuing “soft” industrial policies, “which aim to develop a process whereby government, industry, and cluster-level private organizations can collaborate on interventions that can directly increase productivity.” Here is the full paper. They have an extensive list of papers (with summaries) on industrial policy, trade and growth.

Research generally neglects to identify whether interventions were motivated by industrial policy reasons or rent-seeking considerations. In fact, there is no evidence to suggest that intervention for industrial policy reasons in trade even exists. Instead, existing evidence suggests that protective measures are often motivated by optimal tariff considerations, for revenue generation, or to protect special interests (see Broda et al. 2008, Gawande et al. 2005, Goldberg and Maggi 1999, and Mobarak and Purbasari 2006). Tariff protection is also frequently granted to less successful firms or declining industries that have political power (Beason and Weinstein 1996 and Lee 1996).

If such measures are part of a broader effort to achieve technological upgrading then they may be helpful, whereas if they are implemented in isolation they are likely to fail. 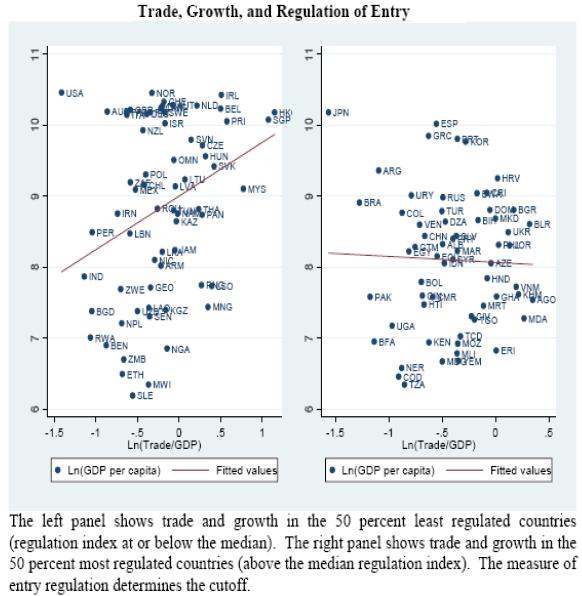 Rather than deliberately picking winners, governments could subsidize private efforts to “discover” new areas of comparative advantage (what Hausmann & Rodrik call “self-discovery”) or by working with existing industries and clusters to deal directly with coordination failures that limit their productivity and expansion.

Instead of blanket subsidies for exports and FDI, one can try to attract multinationals to produce key inputs or to bring specific knowledge needed by clusters with the ability to absorb them. As Chandra and Kolavalli (2006) have put it, “without host-country policies to develop local capabilities, MNC-led exports are likely to remain technologically stagnant, leaving developing countries unable to progress beyond the assembly of imported components” (p. 19).

“Soft” industrial policy: They propose “soft” industrial policy for developing countries. It basically seeks to directly address coordination failures that keep productivity low in existing or promising sectors rather than engage in direct interventions that might distort prices. This is like facilitating the process that already looks promising but is not realizing its full potential, rather than instituting one all anew whose success is unclear. Efforts could be of varying range such as helping particular clusters by increasing the supply of skilled workers, encouraging technology adoption, and improving regulation and infrastructure. It avoids tariff protection, export subsidies, and tax breaks for foreign corporations. They acknowledge that “hard” industrial policy might be easier to implement than “soft” industrial policy but there are high possibility of manipulation by vested interest groups in case of “hard” industrial policy.

Posted by Chandan Sapkota at 12:52 PM No comments: