Critique of the new poverty line

Sanjay Reddy, in a new one pager from the IPC, argues that the new global poverty estimate ($1.25 a day) just digs dipper into the pitfalls of earlier estimate. He is unsatisfied with the methodology used in the survey. Here is a paper, written by the World Bank economists Ravallion and Chen, Reddy is referring to. Check this one as well (Dollar a day revisited). Here is more from Reddy. 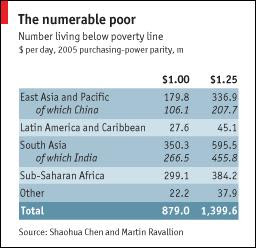 ...The new international poverty line is too low to cover the cost of purchasing basic necessities. One could not live in the US on $1.25 a day in 2005, nor therefore on an equivalent amount elsewhere. One’s daily income can be a great deal higher than $1.25 and still leave one unable to fulfill basic nutritional requirements. Since the international poverty line is defined in equivalent purchasing power units, this incoherence is not easy to overcome.

...The PPPs calculated for each country also inappropriately reflect irrelevant information about the pattern of consumption in third countries other than the country in which the price level is being assessed and the base country with which prices are compared (the US). This is because the worldwide pattern of consumption determines the weights placed on different commodities when assessing the price level in each country.

...The underlying source of the problems is the lack of a clear criterion for identifying the poor. We have no basis to conclude that the new set of PPPs generate poverty estimates which are closer to the “truth”. 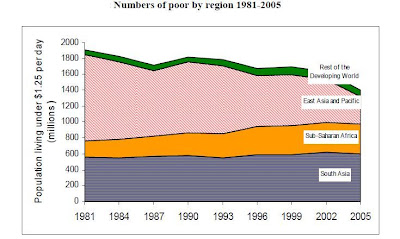 Posted by Chandan Sapkota at 3:18 AM No comments:

Stiglitz sees a pattern of deep systemic problems in the events leading to a series of bankruptcy and state bail outs in the economy. In an earlier piece, he puts the blame on "a pattern of dishonesty on the part of financial institutions, and incompetence on the part of policymakers."

And, Stiglitz throws a punch at those who consistently parrot for minimal regulation:

This is not the first crisis in our financial system, not the first time that those who believe in free and unregulated markets have come running to the government for bail-outs.

Posted by Chandan Sapkota at 1:06 AM No comments:

The state of Nepal's stock market

Here is a brief analysis from the Institute for Development Studies (IfDS):

...The share price of the commercial banks listed in the stock exchange is very high with no relation whatsoever with the earnings of the concerned institutions. As a result, the capitalized value of the share price of the seventeen commercial banks is Rs. 259 billion, compared with the face value of not exceeding Rs. 30 billion. The main question that must be taken into account seriously by the monetary authorities is the continuity of such bubble in the share price. If such bubble bursts due to any reason, the country will be in a very difficult situation both politically and economically, as the experiences of several developed countries of the recent past suggest.

Nepal's stock market is so insulated to political situation and fiscal and monetary policies that the effect of a change in these variables would be felt in the stock exchange at the beginning of the next such change in the variables! Okay, this might seem a little inflated, but the reality is that the time lag is very long. Also, there are instances when the stock market was indifferent to the changes in fiscal and monetary policies. How could this happen?

Note that there are 21 commercial banks, 58 development banks, 79 finance companies, 12 micro credit banks in Nepal. This for a population of around 26.4 million. Sadly, the handful of commercial banks are awash with liquidity and the poor people are yet to see this being channeled for investment/development purposes.

Posted by Chandan Sapkota at 12:44 AM No comments: