People usually focus on merchandise trade while analyzing trade performance because it is easier to access data at the most disaggregated level. But, what about the services sector of Nepal? There are many studies that have superficially looked  at services trade potential. But, the dynamism of this sector and its potential to ensure structural transformation are studied less than it is for merchandise trade (two recent studies that look at India’s services sector are here and here). Here is last year’s blog post about the relative competitiveness of services trade in comparison to merchandise trade.

Nepal is bearing negative trade balance in services trade since 2005 (see figure below). The total services trade deficit in 2010 was around US$199 million, up from US$137 million in 2009. Out of the six services sub-sectors that Nepal exports and imports, there was positive trade balance in communication services, government services, and other business services only in 2009 and 2010. Even among these three, notice that trade surplus in two sub-sectors is decreasing, but it is increasing in other business services (see table below). Surprisingly, in travel sub-sector, the trade deficit was US$58 million (US$344 million export and US$402 million import). I think due to the Nepal Tourism Year 2011 campaign and record number of visitors, trade balance in travel sub-sector might be better in 2011. 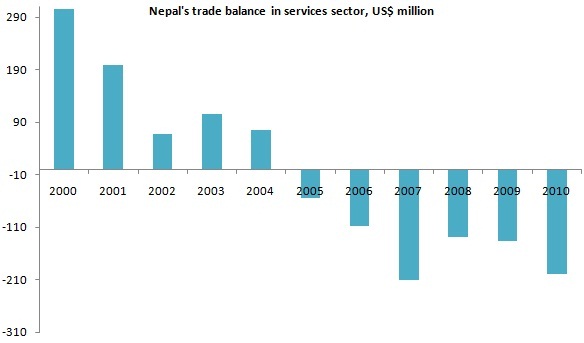 Clearly, Nepal is unable to exploit the services sector market potential despite having comparative advantage in its trade. The problems faced by exports sector in general are:

Posted by Chandan Sapkota at 4:33 PM No comments:

Water and energy consumption in Nepal

The information is derived from from a recent report on green growth in Asia and the Pacific. The domestic water use per capita (471 cubic meters per capita in 2000) in Nepal is below the estimated minimum requirement. Leakage, inadequate water quality, inefficient domestic water use, and underinvestment in providing access to basic services are common features in countries with low water use per capita. No surprise that people in major urban centers can run their taps just for few hours each week. The work to channel water supply from Melamchi is yet to be realized ever after so many years of commencement of its construction.

Domestic material (including energy) consumption is pretty low (fifth lowest—2.64 tons per capita in 2005) compared to other countries in the continent. It signals potential for future growth by exploiting the available materials for consumption and production. Furthermore, per capita energy use is the third lowest (14.36 gigajoules per capita), followed by Myanmar and Bangladesh, in Asia and the Pacific. Note that countries with high energy use per capita tend to have high HDI value. 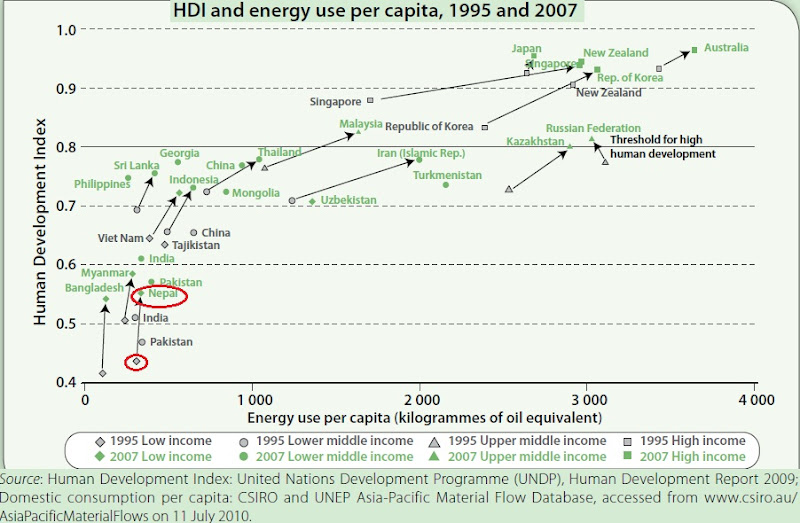 Posted by Chandan Sapkota at 1:08 PM No comments: