Confidence on the Indian rupee in Nepal

There is an interesting story in yesterday's Republica (“Nepali village using Indian currency only”, p.10) about the use of Indian currency for daily transaction purpose in Sonvarsa VDC of Siraha district. Sonvarsha is located 6 km from Laukaha market in India.

Below is an excerpt from the article:

“We accent IC only from our customers. It might be surprising for people of other places but it’s a common practice here,”  Ram Datta Yadav, a vegetable vendor at a local fair, said. he further said that other traders are also using IC in local markets.

Ram Udgar Yadav, a local customer also said local people use IC to purchase goods as they trust Indian currency more than Nepali banknotes. “Even if we wish to exchange Nepali rupees, we have a compulsion to pay high exchange rate,” he said.

Nabin Yadav of Bharanwarajpur of Siraha also said that all the transactions from real estate to household goods takes place through Indian currency. “Traders also expect IC from the buyers and buyers also find it more convenient to make purchases in IC,”added he.

This short article provides a sense of the increasing confidence on the Indian currency in the border towns in Nepal. Recently, there was a shortage of Indian currency in the exchange market and the banks are pretty strict in giving Indian rupee. The central bank had imposed a cap on daily IC withdrawal from ATMs in India. Indian currency of less than or equal to IRs 100 can be freely used in Nepal for daily transaction purpose. Also, people having bank accounts in Nepal can easily withdraw Indian rupee from ATMs in India. 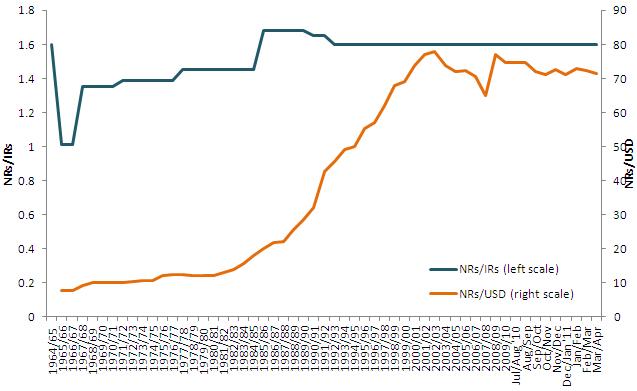 The increasing confidence on the Indian rupee in turn reflects the declining confidence on the Nepali rupee. Nepali rupee is pegged to Indian rupee at IRs 1= NRs 1.60 since 1993. In real terms (adjusted for inflation in both countries), the exchange rate with India is appreciating, eroding the competitiveness of Nepali goods and services (see the figure below). In its 2012 Article IV consultation, the IMF also argued that there has been an overvaluation (REER) of Nepali rupee against Indian rupee. Over 50% of exports and imports goes to and comes from India (informal trade is also pretty high). India provides the only exit point for third country trade. India is the sole supplier of petroleum fuel and LPG to Nepal. Nepal has a huge trade deficit with India. Importantly, there is free flow of goods and labor between the two countries. More on this topic here. 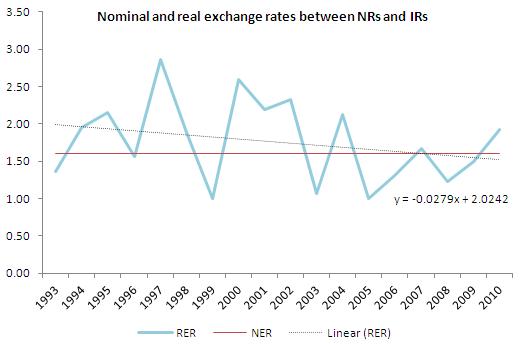 While the Indian economy is surging ahead, the Nepali economy is struggling to achieve even 5% growth rate. The pegged currency provides a cushion for Nepali economy in terms of its ability to combat inflation and maintain some form of macroeconomic stability. The high inflation in Nepal, lingering political uncertainty, unresolved infrastructural as well as structural constraints, receding absorption capacity along with low capital expenditure, unfavorable industrial relations and gloomy growth prospects have induced people to hold stronger currency instead of a struggling one. Hence, the tendency to hold Indian rupee and do transaction with it is not surprising. People perceive that Nepali currency might further lose value in real terms in the coming days. In fact, despite official exchange rate remaining constant since 1993, the ground reality in the border towns is that traders and retailers transact IRs 100 with NRs 163 (even NRs 165).

So far the central bank has been able to maintain supply of Indian rupee more or less to the required amount (discount the occasional spikes in demand for IRs created by currency speculators informally) by even selling over US$1 billion of reserves to purchase IRs. As long as remittances continue to increase and forex reserve keeps rising, there won’t be much issue as imports will get easily financed. If something goes wrong in this process (say decline in reserves), then the economy will be in trouble.

The solution would be to restore confidence on the Nepali rupee. For this to happen, growth prospects should be good; manufacturing output and exports have to increase; more investment has to come into sectors that have the capacity to relax critical binding constraints; interest rates have to be generally higher than in India; industrial and investment climate have to be good; and inflation has to be controlled to the extent possible by tackling the resolvable supply-side constraints.