New initiatives to address binding constraints to growth in Nepal.

New plan for Metro Railway of 66-km network, 5 lines, 31 stations in Kathmandu. Bhoj Raj Poudel writes “the proposed 66.1-km network comprises 31 stations in total -- including transfer and ordinary stations. The main terminal of the metro will be located at Ratnapark, says the report, which is yet to be approved by DoR.” Let us hope that this project will move ahead as planned. 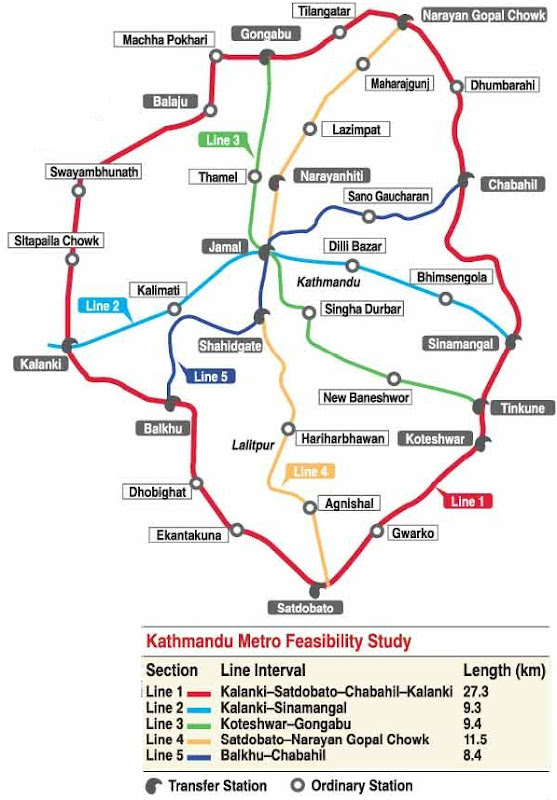 "Before finalizing the DPR, we will also calculate the estimated cost of the whole project. As per the basic design, which was approved on March 5, the Baneswhor flyover will be 17 meters wide and 340 meters long.” The Kathmandu Valley Raod Expansion Project (KVREP) is currently building a 10-lanes road connecting Tinkune with Maitigharmandala. The Baneshwor flyover, the design of which is compatible with the new map of the upgraded Tinkune-Maitigharmandala road, will have four lanes.

In a clear case that raises question over government´s impartiality on bid invited to develop regional international airport in Pokhara, Finance Minister Barsha Man Pun was found to have signed a memorandum of understanding (MoU) with China CAMC Engineering Co, committing to support it win the tender.

The fact surfaced when Nepali Congress lawmaker Dip Kumar Upadhaya circulated the MoU at a meeting of parliament´s Public Accounts Commitee (PAC) which called to grill Tourism Ministry and civil aviation authority officials over the controversy created by short deadline to bidders.

The MoU also availed by Republica commits that "the government of Nepal shall provide CAMC the solid and substantial support" in a tender that Civil Aviation Authority of Nepal (CAAN) would call for Engineering, Procurement and Construction (EPC) contract for the regional international airport. The MoU is undersigned by Pun on behalf of Nepali government and Lui Shengcheng, regional general manager of China CAMC Engineering.

The deal was signed on September 20, 2011 at Ministry of Finance in Singh Durbar, and Energy Minister Posta Bahadur Bogati and Chinese Ambassador to Nepal Yang Houlan have also signed it as witnesses. It was following the deal that MoF had instructed CAAN to invite the bid for developing the regional airport.

In a bid to cultivate competition in petroleum exports to Nepal, the government is mulling over requesting India to allow it import fuel from any Indian oil marketing companies along with the present supplier - Indian Oil Corporation (IOC).

Presently, Indian Oil Corporation (IOC) holds supply monopoly in the Nepali market.
Ministry of Commerce and Supplies (MoCS) is pushing the issue through Nepal Oil Corporation (NOC), which is presently holding talks with the IOC to review the bilateral Petroleum Supplying Agreement that expires on March 31.

“As existing bilateral agreement signed in 2007 already allows Nepal to import fuel from any countries, we see no point in India limiting oil supply authority to IOC alone,” said a highly placed MoCS official. If required, we will also hold talks with India at the higher governmental level, said Lekh Raj Bhatta, Minister for Commerce and Supplies.

This is not the first time BPCL showed interest to export fuel to Nepal. The company in 2010 had approached the Indian government to end IOC´s monopoly in exports to Nepal and open it to all oil marketing public sector undertakings.

Also BPCL is not just one company that is eying Nepal´s petroleum market. In late 2009, Essar Group -- a private petroleum group of India -- too had approached the MoCS for opening imports from private Indian suppliers as well.

Posted by Chandan Sapkota at 1:08 PM No comments:

A latest working paper (Food Price Escalation in South Asia: A Serious and Growing Concern) by Bruno Carrasco and Hiranya Mukhopadhaya of the ADB states that “a spike in the cost of food staples like rice and wheat could push tens of millions more people into extreme poverty in South Asia but food subsidies targeted at the very poorest in the region would help them cope with still-high prices”. Low income households in South Asia spend more than 50 percent of their budget on food. It also notes that while Nepal and Sri Lanka would be less affected, although a further surge in wheat prices would be especially painful for Sri Lanka, which is completely dependent on imports of the staple and has already seen prices hit historical highs in recent years.

The following factors are driving poverty elasticity and may contribute to differences in elasticity indices across countries: (i) the higher inequality, the lower the price elasticity of
poverty and hence the smaller the impact on poverty ratios for any given increase in food prices (ii) the distribution of income just under the poverty line (more people just under the line, the larger the elasticity), (iii) the higher the base level of food prices, the larger the elasticity as for example a 1% change in price at $10/unit has a larger impact than 1% change in prices at $5, (iv) the level of GDP/capita with smaller elasticity for countries with higher incomes, and (v) country specifics such as the effectiveness of social security systems and other safety nets, and other cultural institutions captured by a country dummy.

Reasons for rise in food prices and inflation:

They recommend subsidizing the cost of food for the most poorest and vulnerable ones by government without putting an excessive burden on government spending. Now, that is the challenge faced by all developing countries, isn’t it? The big question is how to strike a balance between extending subsidies (temptation is always high to increase such programs for political gains) and fiscal position (more subsidies mean increase in fiscal deficit in the absence of high growth of revenues that can offset the increase in expenditure due to subsidies).

[Here is a draft paper I wrote on high food prices and its impact on South Asia. Presentation slides here and a related article here].

Posted by Chandan Sapkota at 10:44 AM No comments: