Except for a few episodes of growth spurts, economic growth has largely been low yet volatile in Nepal, mostly stagnating below 5 percent. Similarly, inflation has been stubbornly high, mostly settling in between 6 percent and 12 percent. Public expenditure absorption capacity is receding but revenue mobilization is robust on the back of taxes on remittance-financed imports and domestic consumption. Outstanding public debt is only about a quarter of gross domestic product (GDP). External sector is largely stable, but is vulnerable to fluctuation of remittance inflows. Financial sector is relatively stable, but remains exposed to asset-liability mismatches arising from recurring sources, including reckless lending growth amid slowdown in deposit growth, ever-greening of troubled assets and mismanagement. Meanwhile, unemployment remains high.

This scenario does not portray an economy that is macroeconomically sound with robust fundamentals to support high and sustainable inclusive economic growth. Instead, it resembles an economy that is susceptible to macroeconomic imbalance triggered by a few exogenous factors, including fluctuation of remittance income, monsoon rains, trade and supplies disruptions, and political instability. These challenges need to be properly diagnosed and addressed (to exploit low hanging fruits) as the country marches towards its overarching goal to become a middle-income country by 2030. Specifically, medium-term macroeconomic challenges emerge from low capital formation, fiscal mismanagement, stubbornly high inflation, and financial and external sectors vulnerabilities.

Some analysts quickly point to the impressive growth and inflation numbers in FY2017 and argue that the economy may have reached an inflection point from where the trajectory will be upward and stable. GDP growth (at basic prices) increased to an estimated 6.9 percent and inflation moderated to 4.5 percent in FY2017. These largely reflect a ‘base effect’ blessing and to some extent the government’s efforts to improve electricity supply and accelerate reconstruction works. In FY2018, the base effect will quickly dissipate. Hence, it will be difficult to attain FY2018 growth and inflation targets of 7.2 percent and 7.5 percent, respectively, unless the factors supporting growth and inflation are much stronger than in FY2017. This is unlikely to be the case. 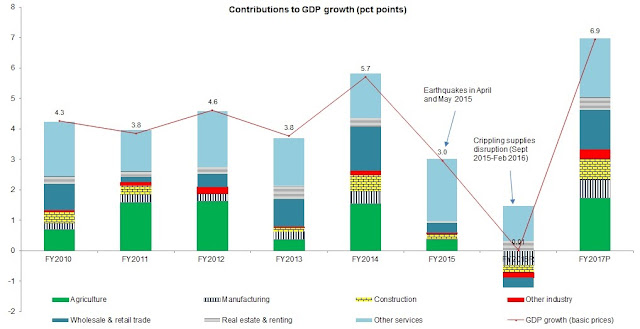 Overall, the economy has not reached an inflection point and the performance of key macroeconomic variables will continue to be underpinned by the same exogenous factors such as monsoon and remittances. The gradual deindustrialization beginning FY1997 (i.e., coinciding with the Maoist insurgency) hasn’t stopped as this sector barely constitutes 14 percent of GDP now, down from a high of 22.3 percent of GDP in FY1996 (the outcome of liberalization and structural reforms initiated in the early 1990s).

The current state of macroeconomics will not support a rapid structural transformation, whereby the pace and pattern of economic growth and development are supported by a vibrant industrial sector, higher absorption of unemployed workforce in productive sectors, and production of high-valued, high-productivity goods and services across all sectors. Five key macroeconomic challenges will dictate the nature of structural transformation Nepalese economy will be undergoing during the medium term.

First, sources of growth have to be reliable, i.e. less reliance on monsoon rains for agricultural output growth and on remittances-backed demand for services output growth. A substantial proportion of the variability of GDP growth is caused by volatility of agricultural output growth, which is dictated largely by monsoon rains as irrigation network is too limited to substitute for water shortfall during weak monsoon. For a more dependable source of growth, capital formation must increase so that the most binding constraint to economic growth— inadequate supply of infrastructure, mainly energy, transport, and irrigation— is addressed head-on. Hence, a major macroeconomic challenge in the medium-term would be to enhance quantity as well as quality of public and private investment.

Public gross fixed capital formation averaged just 5.8 percent of GDP in the last five years. This needs to increase to about 8-12 percent of GDP annually. The public sector has to lead the way by accelerating capital spending, which has been affected by structural weaknesses in project preparation and implementation; low project readiness; bureaucratic hassle in project approval and sanctioning of spending authority; weak project and contract management; and political interference at planning, management and operational stages. Public capital spending averaged just 4.8 percent of GDP in the last five years. Furthermore, almost 60 percent of the actual capital spending happened in the last quarter and 41.2 percent in the last month, raising doubts over the quality of spending. Low quality of capital investment tends to increase operation and maintenance budget, which is a part of recurrent spending, for the next few years. 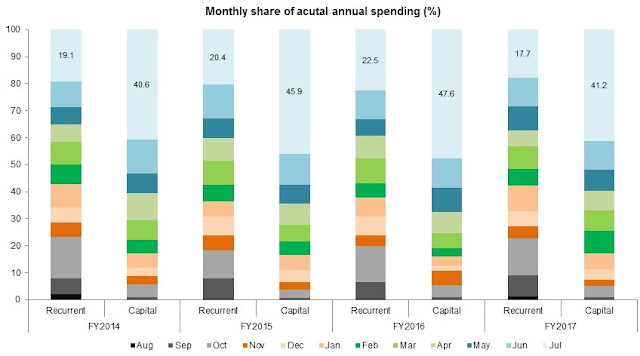 Second, while there a need to enhance quality and quantity of capital spending, there is also a need to contain growth of recurrent spending, which is almost equivalent to tax revenue. This calls for a bit of fiscal discipline although public debt is only a quarter of GDP. Just because there is ample fiscal space does not mean that recurrent spending can be indefinitely increased to satisfy politician’s voter base and supporters (including local contractors) by doling out incoherent pet projects and cash handouts. Better fiscal management is especially important in the federal setup. Additionally, revenue leakages (through under-invoicing of imported goods and tax waivers) need to be plugged in and tax sources diversified in order to mobilize enough revenue to cover rising recurrent spending and to maintain sound fiscal balance. 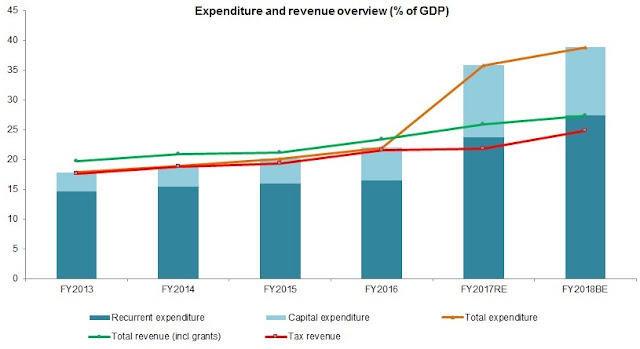 Third, stubbornly high inflation has to be lowered by primarily addressing supply-side constraints as monetary policy does not have much traction to contain it due to pegged exchange rate between Nepalese and Indian currency and the fact that almost 60 percent of imports, including fuel and cooking gas, are sourced from India. Average annual inflation of around 8.7 percent in the last ten years is too high, and discourages investment and saving. Supply-side issues such as shortage of electricity and fuel, high transport and wage costs, low productivity, and excessive labor unionizing for political reasons are threats to lowering inflation and accelerating industrialization. Ideally, inflation in Nepal should not deviate much from that prevalent in India. The central bank and the government need to pay special attention to transitory and structural factors driving inflation. 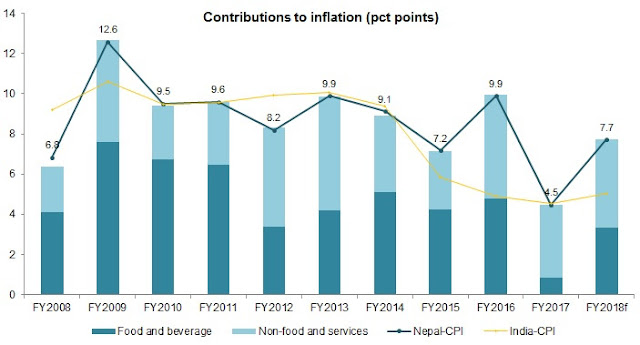 Fourth, financial sector stability is another macroeconomic challenge over the medium-term. Financial sector troubles are recurring, typically caused by accumulation of unbalanced portfolio, lax monitoring and supervision, and asset-liability mismatch. As experienced in the past, a sudden credit squeeze arising from such factors leads to erosion of confidence on and efficacy of the regulator. The central bank needs to enhance its capacity to enforce monetary rules and regulations, and intensify monitoring and evaluation of banks and financial institutions. Consolidation of financial sector; better quality and diversification of portfolio; and expansion of traditional as well as new financial services throughout the country are some of the unfinished tasks for the central bank. Furthermore, the central bank needs to think beyond buying and selling of government bills and bonds as a core monetary policy instrument. As such, back-loading of budgetary spending in the last month of fiscal year drastically increases liquidity in the first quarter of next fiscal year and then it begins to get tighter in the next two quarters, heightening interest rate volatility.

Fifth, the gap between demand for and supply of materials needed for post-earthquake reconstruction and the inelastic nature of import demand would mean that import growth will likely remain high in the next few years. Meanwhile, without much improvement in supply-side constraints and implementation of investment-friendly laws and policies, export growth may be at most moderate. Given forecast of low fuel prices globally due to supplies glut as well as subdued demand, investment will likely continue to slowdown in the major fuel and commodity exporting countries, some of which employ a large number of Nepalese migrant workers. This would mean either continued deceleration or tepid growth of remittance inflows, potentially resulting in current account deficit. The widening trade deficit coupled with decelerating remittances resulted in a current account deficit of 0.4 percent of GDP in FY2017, the first deficit since FY2011. Note that Nepal’s low per capita income, limited production base, and the need to import materials for reconstruction necessitate tolerance to moderate level of current account deficit in the medium term. However, the government and the central bank need to keep an eye on the level of balance of payments and foreign exchange reserves so that it is enough to sustain at least 7 months of import of goods and services. 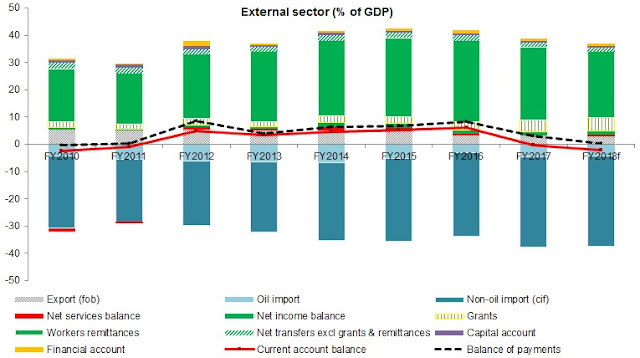 Posted by Chandan Sapkota at 1:52 PM No comments: