GDP by district and region in Nepal

What is the size of regional economies in Nepal? Better what is the size of each district in terms of economic activities and what is its share in total GDP? Such disaggregated data is pretty hard to get as the CBS does not publish them in its annual (and now quarterly) national accounts estimate. Well, this blog post will shed some light on this front by distilling the share of each district and region in the national economy.  The Nepal HDR 2014 estimates the district and regional level GDP data using a variety of proxy indicators and survey datasets. Again, these are only estimates, which is the closest you can get to right now in pursuit of regional and district level disaggregated data. Earlier, a NRB study estimated that Kathmandu Valley contributed between 23.4% and 31% to GDP. This new estimate puts the figure at 20%. Data on poverty by district is covered here. District-wise household size, population growth rate, migrant population and remittance inflows data here.

Regarding industry sector, Kathmandu district contributes the highest (13.9%), followed by Bara (9%), Morang (5.3%), Nawalparasi (4.2%) and Dhanusha (4.1%). It is concentrated in Tarai region. The lowest contributors are from the mountains region. The Tarai region contributes 52.4%, Hills 43.3% and Mountains 4.4%. The central development region’s share is 53.7%.

Let us look the district-wise share of major sub-sectors in total of those sub-sectors (agriculture sector covered above) that drive GDP: manufacturing; construction; retail and wholesale trade; and real estate, renting and business activities. 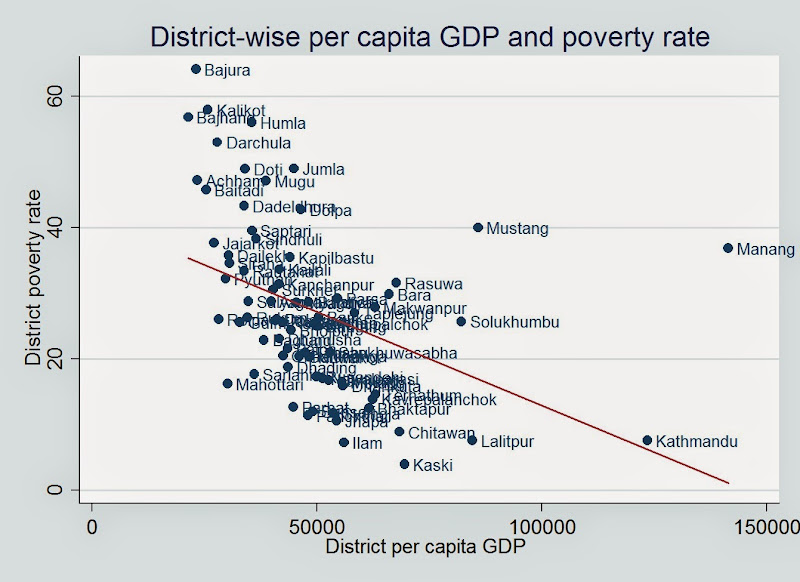 Macro messages:
It is pretty difficult to see the relevant stuff on the figures above. One way to see full size version is to right click on the figure, select 'copy image URL' and then paste it in browser. Also, it was not possible to include all the figures in this blog post. Below is a slideshow for interested folks.
Posted by Chandan Sapkota at 3:23 PM No comments: