Krishna, Mitra and Sundaram have an interesting NEBR working paper 16322 where they show that states with lesser openness to international trade generally have weaker transmission of international prices to domestic prices. It means that poverty is high in lagging regions due to a lack of exposure to international markets. They also show that countries with lesser proportion of the population in lagging regions experience greater reduction in poverty rates following trade liberalization. They suggest that in order to make gains from trade equitable, there has to be adequate provision of infrastructure, including equipped ports, better and more extensive roads and communication links.

Generally, increase in trade (read exports) boosts economic growth rate. The growth, in most of the cases, translates into reduction in poverty (on an average) as there is rise in national income. However, the distribution of gains from trade is not always uniform, meaning that some gain, others won’t, or even some might lose. Lagging regions might not benefit from trade because transportation and transaction costs might be very high. Furthermore, some regions might have market rigidities such as immobility of labor and lack of capital, which also suppresses gains from trade. Also, trade liberalization might itself lead to clustering of industries in one place, primarily due to economies of scale. This also makes distribution of the fruits of trade uneven. For instance, three coastal areas in China (the Bohai Basin, the Pearl River Delta, and Yangtze River Delta) accounted for more than half of the country’s GDP in 2005, but constitutes less than a fifth of the total geographical area.

The paper is about estimation of differential impact of trade liberalization in lagging and leading regions within a country, factors inhibiting market integration, and factors preventing trade from positively affecting development in lagging regions. The authors find that a percentage point reduction in tariff rate decreases poverty by 0.22 percent in the leading states, while the effect is insignificant in the lagging states. Within leading states, the effects of trade liberalization are also larger in urban areas: A percentage point decrease in tariff rate decreases poverty by 0.19 percent in rural sector and by 0.26 percent in urban sector in the leading states. 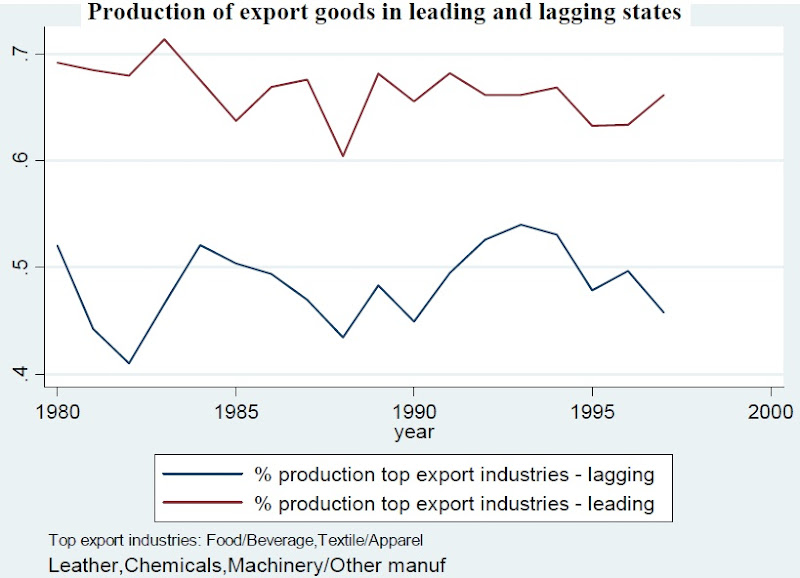 For Nepal, the authors assume that central and western development regions to be leading regions and eastern, far-western, and mid-western development regions to be lagging regions. According to the author’s classification, around 46% of the population in Nepal resides in lagging regions. The mean national average distance to capital city is calculated to be 236 Kms. Nepal liberalized trade in 1991, India 1994, Pakistan 2001, Sri Lanka 1977-83 and 1981, and Bangladesh 1996 (see Table 4 in the paper).

“Bangladesh, India and Nepal show higher regional inequality as measured by above average poor in the most lagging region as a percentage of the total poor in the economy. For these countries, a priority would be to ensure integration of backward regions and government redistribution programs to lessen inequality so that the poor may also benefit from trade reforms.”

Posted by Chandan Sapkota at 8:32 PM No comments: