Trade facilitation and corruption at customs in Nepal 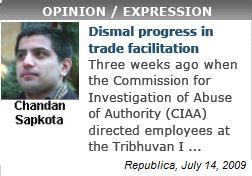 My latest op-ed is titled “Dismal progress in trade facilitation”. It is based on The Global Trade Enabling Report 2009, published by World Economic Forum. Last year, I wrote a similar piece (Leaking customs and weak trade)and argued that trade facilitation process in Nepal is one of the worst in the world. Sadly, there has not been much improvement this year as well.

Three weeks ago when the Commission for Investigation of Abuse of Authority (CIAA) directed employees at the Tribhuvan International Airport (TIA) to wear uniform without pockets in order to control theft and corruption, the news made quite a buzz in the media and blogosphere. This move came after numerous reports of irregularities and corruption – though not surprising – at the airport were reported in the media and to the CIAA.

Corruption and irregularities are not exclusive to TIA checkpoints; it is like a pandemic plaguing almost all the sectors in the economy. One of the places where such activities are excessively rampant is at custom departments, which are the key points for trade facilitation and revenue generation. An efficient border administration, supportive business environment and well-developed transport and telecommunication infrastructures help reduce transaction costs, ensure timely delivery of goods and services and realize the benefits of trade and aid growth.

Despite being a member of WTO in 2004 and of two other regional trading blocs, the benefits of trade Nepal has reaped so far are horribly low. The value of merchandise imports are more than three times the value of exports—in 2008, exports and imports amounted to US$ 887.7 million and US$2904.4 million respectively. More than 50 percent of trading activities take place with India alone. Exports to other countries have been decreasing, chiefly because of internal labor disputes, supply bottlenecks and inefficient ‘enablers’ of trade. Note that Nepal does not produce many goods and services that could be exported with comparative advantage. Worse, on the current ‘product space’, there are only a few goods and services that could be potentially exported with comparative advantage, provided that institutional, regulatory and financial conditions are right and relevant infrastructures adequately supplied.

Given this situation, the main task for now is to make the most out of existing goods that are traded through our customs. How successful have we been on this front? Latest evidence shows that we have not made satisfactory progress and a lot needs to be done to facilitate trade across borders. Nepal has barely improved in the trade enabling rankings complied by the World Economic Forum. The Global Trade Enabling Report 2009, which ranks countries based on their efficiency at border administrations and business environments that are conducive to trade, ranks Nepal 110 out of 121 countries considered in the report.

This means that high costs, opaque and prolix custom clearance procedures, and inefficient administrative difficulties in an overly bureaucratic environment have been serious barriers to trade. In the latest rankings, Nepal ranks 113 in border administration, 107 in transport and communication infrastructures and 117 in business environment required for promotion and facilitation of trade. Compare these dismal standing with the impressive ranking on domestic and foreign market access (29 out of 121). This implies that despite good ranking on market access, Nepal’s trade facilitating infrastructure, institutions and regulatory structure are so miserable that they overshadow potential gains from increased market access.

Specifically, Nepal’s ranking in efficiency of customs administrations, efficiency of import-export procedures and transparency of border administrations are 119, 105 and 100 respectively. Transparency is crucial for gaining faith of traders and promoting trade across borders. Regularly publishing and distributing entry and exit rules, notifying trading community in advance about any changes to existing rules and publishing Department of Customs’ data and analysis in a timely manner would help to promote transparency and accountability. In terms of effectiveness and efficiency of clearance at customs, Nepal ranks third from the last (119).

In addition, given the level of disturbances and supply bottlenecks in the economy, it is not surprising that Nepal’s rank is 104 in regulatory environment and 121 in physical security, the worst among countries incorporated in the report. Between January and June 2009, there were 532 transport obstructions and bandas (closures) in different parts of the country. The inability of traders to supply goods, mainly because of supply bottlenecks and insecurity, in time has already cost the garment and textile industry, once the major foreign currency earning sector, dearly.

Improving trade facilitation would help reduce transaction costs, effectively monitor border controls, enhance trade competitiveness, discover new tradable goods and attract FDI, among others. At a time when the economy is losing grounds on price and quality competitiveness in the international market, promoting and reforming trade facilitation procedures would at least help to aid the struggling exports industry. Properly addressing these issues in the upcoming fiscal budget would not only foster confidence in our corrupt and inefficient customs but also realize the benefits of trade. 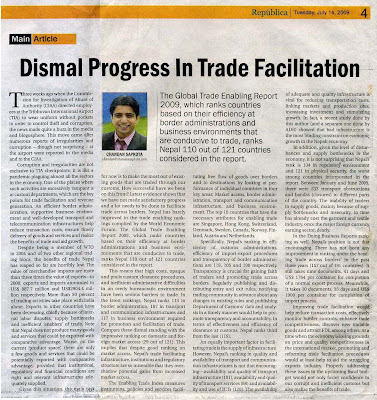 Nepal’s Finance Minister presented Surendra Pandey fiscal budget 2009/10 yesterday. The total budget is Rs 285.93 billion, which is a record-breaking amount. I will write a review of the budget tomorrow. Below are some of the links to news about the budget from the Nepalese media. 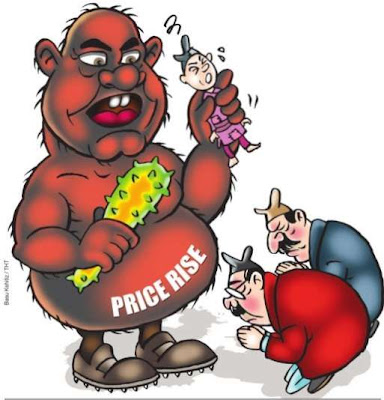 What the budget means for you

Budget 2009: Nothing but promises

A budget with many upsides

The year of the roads

Posted by Chandan Sapkota at 7:57 AM No comments: