The preliminary report of the NLSS (2010-2011) made public by the Central Bureau of Statistics (CBS) states that 25.16 percent of Nepalese population is below the poverty line fixed at 2,200 calorie consumption per day per person and access to essential non-food items.

Based on current market prices, a person needs to earn at least Rs 19,261 (Rs 11,929 for food items and Rs 7,332 for non-food items) every year to buy basic food calories. In 2003-2004 (NLSS II), a person would need 2144 basic food calories. In 1995-1996 (NLSS I), a person would require just 2124 basic food calories to escape the poverty line. Again, the consumption basket is changed in NLSS III. So, even for the same calorie intake people would be spending at varying rate, most likely they would be spending way more, which also means that poverty rate would not decline as fast as they should. Since the consumption basket in NLSS III was changed, the poverty figures cannot be compared with that of NLSS I and NSLL II. More on this in a minute. First, the main highlights of the report:

Earlier, it was reported that poverty declined to 13 percent. This caused quite a stir, with analysts questioning the role of government and donors in helping to reduce poverty (as much of it was attributed to remittances). Specifically, the question was: What did the government and donors do to help reduce poverty if all the astounding gains are due to remittances? They were in the defensive and were struggling to find an explanation (remittances mostly but also due to access to roads, education and health services, they finally said). With NLSS III, they have arrived at 25.16 percent figure by changing the consumption basket (eating more items like fruits, meat, fish, egg and rice). It also means that the figures from NLSS II are not wholly comparable with that of the NLSS III. You can play with statistics and provide multiple deductions from the same data! With the new figure arrived by changing consumption basket (or like they say consumption aggregates), the poverty rate is still high, which means people will be questioning less about the role of government and donor funded poverty-related initiatives (and also the role of remittances). The narrative could be that poverty headcount ratio drastically declined since 1995-96 (to the tune of about 30 percentage point), but it is still high and rigid. [Specifically, about consumption stuff, NLSS III adds one component that asks households their consumption in “last 7 days” (along with consumption during the “typical month” for each of the 72 food items as in previous surveys)].

If you want to make a valid comparison of poverty over time then you need comparable consumption aggregates (similarly constructed and that they are converted to constant prices using price deflator relevant to the poor).  So, the earlier media story by Prem Khanal that poverty declined by 13 percent still holds true. In the figure below, the red line reflects change in poverty over time using the 1995-96 poverty line whereas the blue line reflects change based no the “new” poverty line.The dotted lines in the figure below represent the alternative estimate based on such valid comparisons. 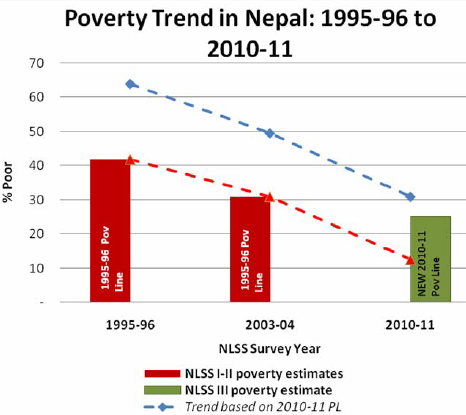 Posted by Chandan Sapkota at 1:09 PM No comments: