An insufficient supply of infrastructure is identified as the major binding constraint to growth in Nepal. Road network is one of most important infrastructures that helps in opening up new markets, linking markets, and enhancing development of supply chains, among others. 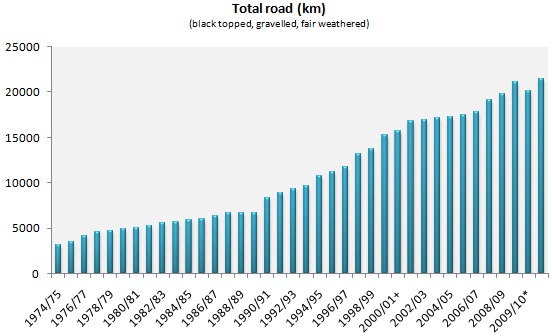 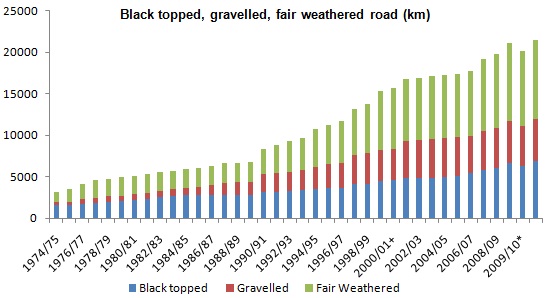 Posted by Chandan Sapkota at 2:50 PM No comments:

Nepal and India signed Double Tax Avoidance Agreement (DTAA) on November 27, 2011. It follows the Bilateral Investment Promotion and Protection Agreement (BIPPA) signed on October 21, 2011. It replaces the agreement signed in 1987.

Here is a piece by Rameshore Prasad Khanal, economic advisor to the PM.

[…] Having witnessed the process of negotiations until perhaps the final shape of the agreement emerged, it´s quite a story.

However, let me first begin with the opinion widely gaining currency immediately after the signing of the deal -- now famously known by the acronym BIPPA -- that Nepal could not get the Tax Agreement concluded which could have benefited the country and instead signed the one that would be in the Indian interest. This is the reasoning based on the analogy that what we do first is always in their interest and what we delay or cannot accomplish would have been in our interest. Both are mutual agreements and are in the interest of both the countries.

Nevertheless, the advantage would go to the one who maximizes the opportunities that these agreements open up. In fact, more than the Tax Agreement, Nepal would gain from BIPPA, as we need huge investments to meet our infrastructural needs and scale up manufacturing operations so that extra manpower from agriculture could be shifted to lucrative manufacturing jobs. We already had a Tax Agreement signed in 1987. This was generally sufficient for elimination of the chance of imposing taxes in the two countries for the same income. Any Indian company doing business in Nepal under the Nepalese law and paying taxes for such income would not be required to pay tax in India to the extent it is paid in Nepal. If tax liability in India is more than in Nepal then such a taxpayer would pay only the difference. As far as the elimination of the incidence of double taxation is concerned, the new Tax Agreement does not add substantial value. In that sense, considering the new Tax Agreement a better deal for us than BIPPA is just an expression of ignorance.

The pertinent question here is why the two countries agreed to have a new agreement completely replacing the 1987 agreement.

Tax Agreements between two countries are the outcomes of mutual consultation, but in recent years they draw heavily on the model Tax Conventions issued by OECD or the UN.
All past agreements that Nepal concluded are based on the two conventions. Both these conventions change frequently in light of the emerging trade and investment issues among countries. Particularly after 9/11, OECD model has seen dramatic changes that took tough negotiations between countries. Many countries saw tax havens as either a source of terrorist financing or place where terrorist could park money without much scrutiny. This is a threat to security everywhere. As a result, many countries thought that information exchange between tax authorities could help track down not only cases of deliberate default of tax but also location of illegal money. OECD Model Tax Convention now includes significant provisions for information exchange that can be used for tax purposes or even for any other purpose as per the law. A contracting state cannot decline to supply information just because the information is held by a bank or other financial institution or any trustee.

As India is obliged to follow OECD model because of its commitment in G-20, the request for amendment to 1987 agreement came from India some four years ago. Initial attempts to hold bilateral negotiations on the proposed amendment failed because of frequent change of government on our side. Finally, the negotiation started after the formation of a new government following the Constituent Assembly election.

During the first round of negotiations, our system was not comfortable on the inclusion of “information exchange” clause. It took quite a while for us to realize that the information exchange clause could actually be used to our advantage. The reason is that those who evade Nepali taxes usually siphon off money to the Indian financial market.
On the contrary, Indians evading taxes often stash money in highly secretive Swiss Banks (however, this is now no longer possible as Switzerland is also willing to share information that is kept as bank secrets provided Swiss government is requested for details of the suspected funds). The agreement empowers Nepal´s tax authorities to seek assistance of Indian counterparts in locating funds that escaped the Nepali tax net. This is certainly a good provision.

Aside from this entirely new elaborate feature, the new agreement reduces the number aggregate of days in a year to 90 only (from earlier 183) for a consulting or service business set up to be termed as “resident” for the purpose of taxation. This certainly increases Nepal´s tax base as there are more Indian consulting companies working in Nepal than our companies working in India. The new agreement reduces the rate of tax dividends paid by the resident company of Nepal to the resident company of India to five percent if the Indian company is holding at least 10 percent of the shares of the Nepali resident company.

For holding below 10 percent the applicable rate is 10 percent. As the rate of dividend tax in Nepal is already low the reduction simply reflects the existing laws of the country. Similarly, the applicable rate of tax on interest payment from a person of one country to the person of another country has been reduced to 10 percent. The new agreement includes provision for the taxation of capital gains, which was not covered in the earlier agreement. The income of Nepali students studying in India will not be subject to Indian taxation for six years. This limit earlier was only three years.

The most significant feature of the new agreement is that anyone living a cozy life in India by defaulting on Nepali taxes in the past can now be brought to book. Nepali tax authorities can obtain assistance of Indian authorities to collect any revenue claims, not just income tax, from a person living in India whose taxes are due in Nepal. If the request is so made the Indian authorities will use the powers as per their law as though they were collecting their own tax arrears. If there is a request from Indian side, Nepali authorities should certainly reciprocate.