Can revenue catch up with rising recurrent expenditure?

Expenditures are already high and rising fast in Nepal. For FY2013, recurrent expenditure allocation is 68.9% of total budget of Rs 404.8 billion. While capital expenditure allocation as well as actual expenditure is declining, recurrent expenditures are rising (thanks to sharp upward revision of public sector wages, cost escalation due to high inflation among others, ad hoc spending programs in the post-conflict situation, increasing subsidies that are not well targeted to reach the real beneficiaries, etc) very fast. It could very well be unsustainable, leading to widening of budget deficit and destabilizing the macroeconomic balance maintained thus far.

At the core of it, the tax revenue (Rs 212.2 billion in FY2012) Nepal is generating might not be even sufficient to cover recurrent expenditures (Rs 243.5 billion in FY2012). The financing of capital expenditure (Rs 51.4 billion)— which is the one that contributes to building productive capacities to stimulate economic activities and generate more job opportunities— is declining, and largely financed by donors. Growth is mostly driven by agriculture (dependent largely on monsoon) and services (driven largely by remittances-backed consumption) sectors. The rising recurrent expenditure has little impact on growth. The one that could is capital expenditure (think of construction sector, financial intermediation, etc.), which, unfortunately, is declining. Below, I present some interesting charts. Readers make their own judgment. 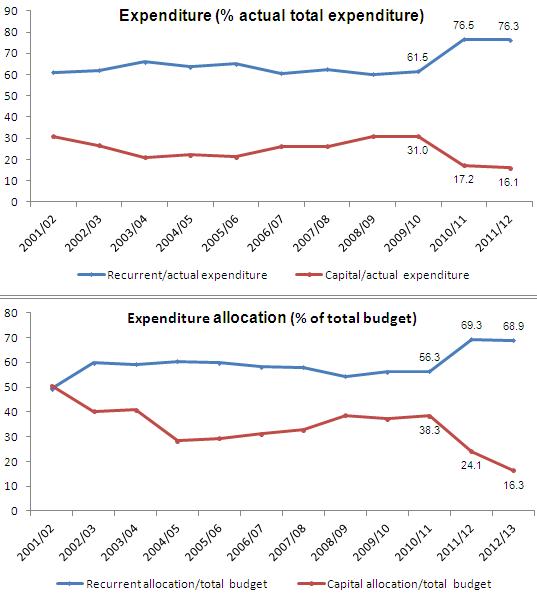 Looking at the growth rates, recurrent expenditure grew on an average between FY2008-FY2012) by 26.3% and capital expenditure by 14.6%. Over the same period, revenue (tax and non-tax) grew by 23.4% (overall revenue including grants grew by 22.9%). It would be hard to manage finances if expenditure growth continues to outpace revenue growth, which is largely backed by increase in tax revenue mobilization on consumption of imported goods (VAT, customs, excise, etc). 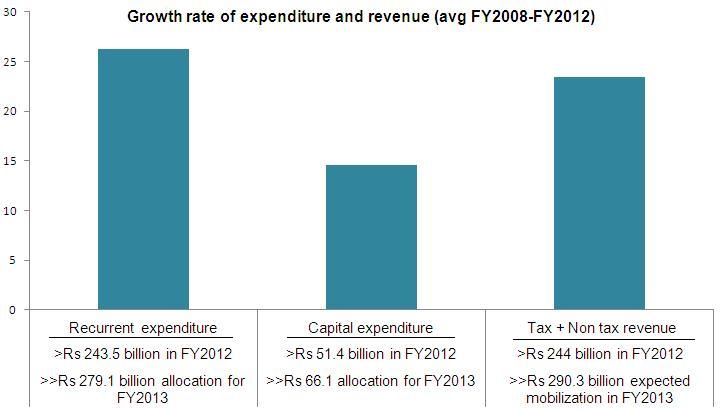