This is a very sad news. The NYT reports that there has been an increase in coffin business during the cholera epidemic in Zimbabwe. 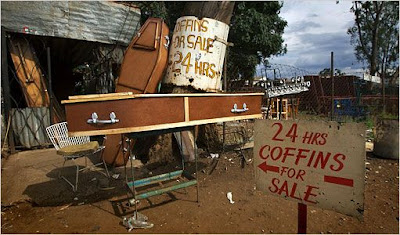 A bad statesman, corruption, lust for power, and complete disregard to public’s concerns are turning the bread basket of Africa into a basket case of failed state. The whole economy is in shambles, with stagnating GDP growth rate and inflation rate hovering at 231 million percent. (some say it could be around 8*10^18 percent)

President Robert Mugabe is demagogue! At a time when the development agencies are calling for urgent need to address cholera outbreak in Zimbabwe, Mugabe is arguing that cholera outbreak is contained and the Western countries are using cholera epidemic as a tool to cause war.

"Because of cholera, Mr Brown, Mr Sarkozy and Mr Bush want military intervention," Mr Mugabe said. He added: "Let's tell them that the cholera cause doesn't exist any more."

Shortly after Mr Mugabe spoke, the UN Office for the Co-ordination of Humanitarian Affairs said the toll from the disease had risen slightly overnight to 783 and that 16,403 were believed to have been infected.

The WHO has warned that the total number of cases could reach 60,000 unless the epidemic was stopped.

Posted by Chandan Sapkota at 4:01 AM No comments: