The sharp drop in real estate prices (conservatively estimated at 30% triggered by the slowdown in growth of remittances in 2011) put much of the financial industry in trouble. Since then the NRB has mandated BFIs to limit real estate and housing loan exposure to 25% of total loans. The commercial banks have more or less complied with the directive (which goes into effect end of FY2013 after a year’s extension to give a breathing space to real estate and housing markets).

Overall, commercial bank’s direct exposure to real estate and housing has declined from 19.4% in FY2009 to around 16.9% percent in FY2012. Indirect exposure through collateral (land and buildings) has also declined from 71.7% percent to 56% over the same period. However, the level of exposure is still high. The development banks and finance companies have even higher exposure to real estate and housing (around 20% and 30% respectively).

Regarding non-performing loans (NPLs), commercial banks have lowered NPLs from as high as 28.8% in FY2003 of total loans to 2.6% in FY2012. The major contributions came from the sharp decline in NPLs of two state-owned banks after their restructuring and the rise in collateral value of real estate/land (as prices rose by six times from 2007 to Jan 2010), which turned many NPLs to good loans without actual repayments.

NBL and RBB together account for 13% of deposits and 11% of banking sector assess. Still, NPLs of RBB and NBL remains at 11% and 6% respectively. NPLs of development banks increased from 4.4% in FY2011 to 5.7% FY2012. Finance companies are believed to have even higher NPLs. Looking forward, the downward correction of real estate and housing prices could directly increase NPLs. Also, indirectly NPLs could increase if clients, who have taken (speculative) loans depending on inflated value of collateral, fail to honor principal and interest on time. 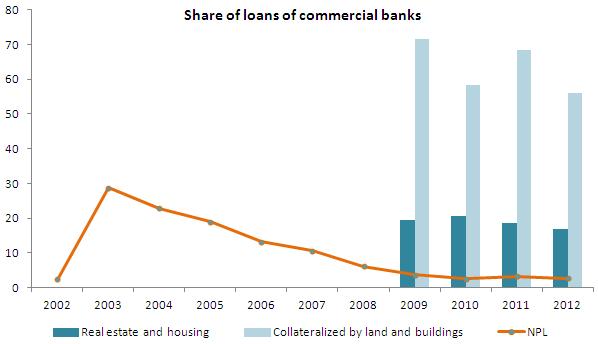 A stress test carried out among the 32 commercial banks showed that a standard credit shock would push capital below the regulatory minimum in 20 banks. Also, a third of commercial banks would be under-capitalized if 25% of performing loans to real estate and housing loans are downgraded to loss loans. If an interest payment is overdue up to 3 months, the loan is classified as “good” and provisioning rate is 1%; for overdue interest of 3 to 6 months, the loan is “substandard” (25% provisioning); for 6 months to 1 year, “doubtful” and 50% provisioning; more than 1 year is “bad”, with 100% provisioning. The term non-performing loans cover all loans except “good”. 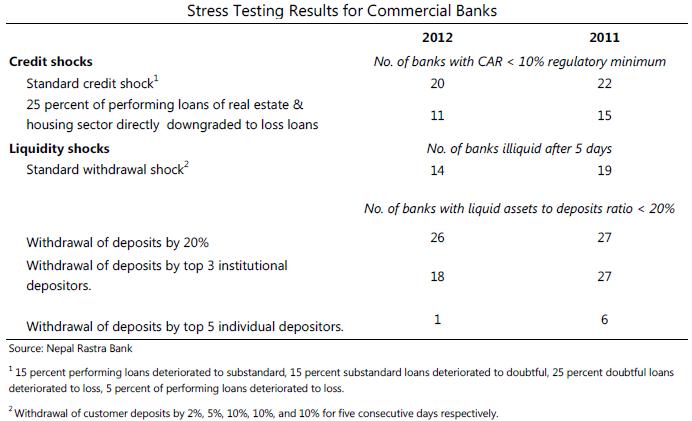 Despite a sort of normalcy right now (thanks to rise in demand deposits as a result of high remittance inflows), the structural weaknesses of the financial sector and the NRB remain the same. The BFIs have been approaching the NRB for merger (of the 40 merger requests, 19 have been granted approval since May 2011) as significant consolidation will have to take place in the coming days in order to have a strong financial sector that will genuinely contribute to the drive to creating a high and inclusive economic growth and development outcomes.

So, what is the cost of a potential financial crisis (could be triggered by slowdown in remittance inflows, worsening balance sheet risks of cooperatives and its impact on BFIs, and further slowdown in real estate and housing markets)? The IMF estimated that the cost of intervention under the three scenarios is as follows:

Posted by Chandan Sapkota at 1:37 PM No comments: