This is a guest post by Greg Shinsky from Monash University, Australia . An earlier blog post from Greg can be found here.

The inquisitive nature of scientific study necessarily means that the details of something as complex as climate change can never be completely agreed to or understood. For example, the Hadley Centre recently released data demonstrating that the warmest year since records began was 1998.[1] On a straight reading, twelve years without a new record would, according to sceptics, be rather a large lull in what is supposed to be a rising trend. However, because heat can be trapped in other parts of the climatic system (such as the oceans) and not show up for a long time, modelling often shows the occasional decade in which no rise in surface temperatures is recorded.

This lack of scientific certainty does not however mean that policymakers and popular media outlets should be ignorant of established scientific principles – namely the reality of the much quoted but perhaps not widely understood ‘greenhouse effect’.

As demonstrated by the diagram below, the greenhouse effect is determined by two primary forces: (1) the amount of incoming shortwave solar radiation that strikes the earth, and (2) the amount of outgoing longwave radiation that is retained by the atmosphere. Within this system, the earth’s atmosphere, consisting of various gases, plays the vital role of a greenhouse. The atmosphere is essentially a blanket which selectively balances and traps the unequal wavelengths of radiation and remits them back to warm the earth’s surface. 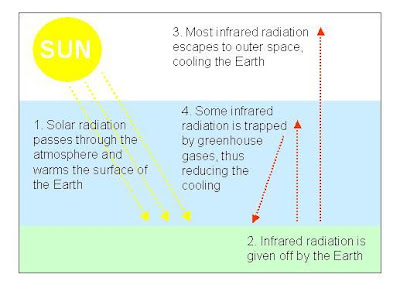 The gases within the atmosphere, such as carbon dioxide (CO2), methane, nitrous oxide and water vapour, exist naturally and are very effective at absorbing thermal radiation expelled from the earth’s surface. However, small changes in the concentrations of these gases can drastically alter the heat-trapping capabilities of our atmosphere. Moreover, these gases have different lifetimes ranging from a few days to centuries.

The continual accumulation of these gases in the atmosphere (with CO2 being the largest by far), since the commencement of the industrial revolution, has led to a disruption of the carbon cycle.

This means the earth’s carbon ‘sinks’, such as forests and oceans, are no longer able to naturally absorb the amount of greenhouse gases emitted, with the result that concentrations of CO2 (in terms of parts per million [ppm]) are now approximately one third higher than pre-industrial levels. At the same time the earth has experienced a 0.6ºC increase in mean global temperature over the past century with most of this increase, according to the IPCC, being “attributable to human activities”.[2]

However, as temperature follows concentrations with a time lag, the full effect of current emissions is yet to be felt and is estimated to fall anywhere between 1.4 to 5.8ºC by the year 2100.[3]