Competition or Coordination Among Aid Suppliers?

Frot and Santiso argue that too much aid fragmentation is not an important issue; too little competition between the suppliers of aid is the main problem. This basically means that the efforts to coordinate aid among donors, in line with the 2005 Paris Declaration and the 2008 Accra Agenda, is a misplaced priority. For aid effectiveness, the priority should be to increase competition among aid agencies.

They argue that in 1960 each developing country received aid from, on average, two donors. In 2006, it was more than 28. They also show despite there has been a significant expansion of donors’ portfolio size, partnerships among them is extremely low. 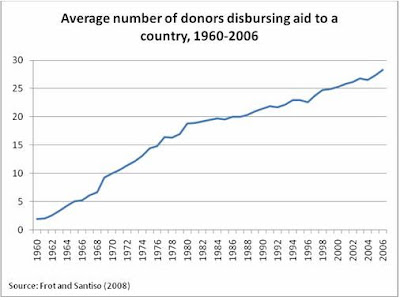 The aid community often debates about too much fragmentation, and so usually too many donors. But in many countries there are very few donors. Too little fragmentation, or more precisely too little competition among donors, is also an issue.

It is peculiar that an abundance of suppliers is criticised in the "aid market", when economics underline the virtue of competition almost everywhere. However in the world of aid, the presence of many donors does not imply competition among them, but more often superposition of costs and administrative procedures. Aid monopolies therefore appear desirable if they cut these costs while barely raising the already overinflated price of aid.

The current approach is institution-based. Donors and recipients meet in international meetings, and pledge to act. Progress is monitored by a multilateral institution (OECD’s Development Assessment Committee) that cannot constrain donors to implement their pledges, except through a delicate game of naming and shaming.

We wonder about the efficiency of this approach. To deal with a too heavy administrative weight by creating new administrations is somehow ironic. It remains to be proven that these new institutions will lower transaction costs and manage to implement a labour division that donors are often reluctant to effectively achieve. The problem with this approach is that it basically ignores why aid is fragmented. It does not attempt to change the incentives donors and recipients face, and so is unlikely to radically change their behaviours. In particular, it disregards the lack of competition that creates fragmentation.

This decentralised approach argues that fragmentation is a consequence of the current institutional setting where competition is absent. It directly tries to make fragmentation an unsustainable outcome instead of ruling it out by assumption. Its difficulty lies into designing the set of rules that provide the right incentives, and to make donors accept these rules. This is by no means an easy task, but it is more ambitious and promising.

Fragmentation increases cost for recipients, leading to reduction in aid efficiency. Dealing with donor’s requirements and consultants reduces the total value of aid for recipients. Sometimes, important human resources are diverted to addressing donor’s multiple conditions. However, sometimes it is better to have as little fragmentation as possible. Recently, a lack of cooperation among donors led to a disastrous health situation in rural districts in Nepal. Instead of competition among donors, a lack of coordination among those working in the health sector was the main problem in dealing with an emergency situation. In such a situation, it is hard to explain how competition among donors would have avoided the unfortunate incident; better coordination among donors would have avoided the health disaster.

Sometimes coordination might be efficient than competition as it might clear information externalities and increase efficiency (by avoiding duplication of interventions). If there are many donors working in the same sector and same project, it is beneficial to align their interventions so that the final output is cost-effective and beneficial to the recipient country.

Both markets or aid agencies could bring the needed alignment. In an imperfect setting, the latter could do the job more efficiently if they coordinate interventions because they “know” what they are doing and what and where. The cost of alignment of interventions through the market might be inefficient with regards to cost and time needed to bring the needed change. The aid industry is not the same as commodity markets.

[Also see takes on similar issue by Owen Barder (who argues for a considered combination of market mechanisms, networked collaboration, and collective regulation for better aid effectiveness) and Bill Easterly.]

Posted by Chandan Sapkota at 11:59 PM No comments: