This blog post is adapted from a 3 post-disaster blog posts on Asian Development Blog. Here are parts 1, 2 and 3.

In a blog post on 1 May, we presented a quick preliminary analysis of the economic impact of the 7.8 magnitude earthquake that struck Nepal on 25 April.

A subsequent 7.3 magnitude aftershock on 12 May brought further casualties and inflicted added damage to property. The government has declared 14 districts as severely affected (mostly in the central and western regions) although the earthquakes have affected about two-thirds of Nepal’s 75 districts.

Background. According to the National Seismological Center, the 25 April earthquake was followed by over 240 aftershocks with local magnitude above 4. The powerful aftershock of 12 May shook a large part of the country, particularly central and western administrative regions, further damaging the already weakened houses and other physical infrastructure, and triggering massive landslides in rural areas.

Latest data have confirmed over 8,500 deaths and 17,866 injured. Some 489,549 and 269,534 houses were, respectively, fully and partially destroyed, forcing thousands of people to seek temporary shelter under tents and tarpaulin sheets. Meanwhile, thousands of classrooms have been either fully or partially damaged.

Needs assessment. The economic cost of damage following the earthquake and aftershocks, and the rehabilitation and reconstruction needs will be clearer after a detailed Post Disaster Needs Assessment, initiated by the government in collaboration with development partners, including ADB. The assessment, which has just kicked off, is scheduled to be completed by 15 June. ADB will be leading/co-leading the assessment of the education, irrigation and transport sectors, and macroeconomic impact assessment.

Growth outlook: The agriculture, industry, and services sectors will see a varying degree of slowdown as a result of the earthquake and powerful aftershocks, which will likely drag GDP growth down to 3.8% in the fiscal year (FY) 2015 ending 15 July 2015, 0.8 percentage points lower than the 4.6% rate forecast in ADB’s Asian Development Outlook 2015 (ADO 2015) published in March. There is a prospect for even lower growth (between 3% and 3.5%) if supply disruptions become more intense than we currently expect. GDP grew by 5.2% (at basic prices) in FY2014.

In FY2016, the loss of seeds, farmland, and livestock, and a weak forecast monsoon will mean agricultural output will remain weak but the industry and services sectors are expected to rebound — depending on the speed of rehabilitation and reconstruction activities, and their impact on aggregate demand. This could result in GDP growth of about 4.5% next year. Within the services sector, the real estate and renting sub-sector is expected to further slow but a modest pick-up in hotel and restaurant activities is likely due to a partial recovery of tourism sector. The possibility of higher growth rate (between 4.5% and 5.5%) exists, but it will be contingent upon the scale and pace of rehabilitation and reconstruction efforts. 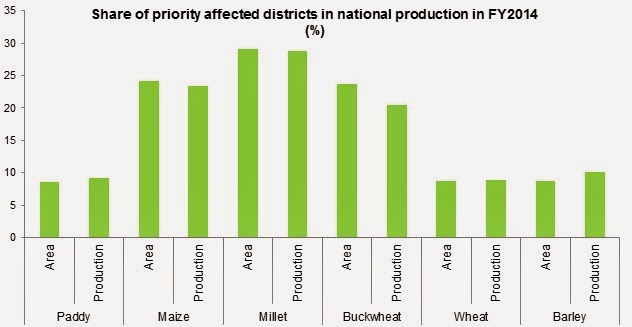 Inflation. Lower agricultural output in the first nine months of fiscal year (FY) 2015 (ending 15 July 2015) was already exerting upward pressure on food prices. This is being compounded by the depletion of household food stocks and farmland in the severely affected areas as well as supply disruptions along the major trading routes with the People’s Republic of China. With the onset of the monsoon, further supply disruptions are likely due to landslides.

These two factors will likely increase prices of cereal, vegetables, and fruits, pushing up food inflation to double-digit levels despite lower prices of fuel exerting less pressure on farm machinery, irrigation, and food processing costs. Similarly, non-food inflation, mainly from imported items, will be boosted by the supply disruptions, which intensified after the strong aftershocks. The combined impact of these two factors will push up headline inflation in FY2015 to 8.2% from the 7.7% level forecast in ADB’s March Asian Development Outlook 2015 (ADO 2015). Inflation in FY2014 was 9.1%.

In FY2016, the projected slowdown in agricultural output due to a likely sub-normal monsoon, higher aggregate demand due to cash transfers to cover basic housing requirement, government, temporary jobs during rehabilitation and reconstruction, and production bottlenecks (arising from the long running supply-side constraints such as the lack of adequate electricity, labor shortages and low productivity, etc) will likely push headline inflation to around 8.5%.

External sector balance. The ADO 2015 forecast Nepal’s current account balance at 2.7% of GDP for FY2015, primarily due to the slowdown in official remittance inflows. In fact, official remittance inflows in the first nine months of FY2015 decelerated much more than our earlier estimate. Hence, despite the uptick in inflows immediately after the earthquake, the rate of annual inflows in FY2015 will still be lower than in FY2014.

Meanwhile, the trade deficit is expected to widen further as exports slow and imports register modest growth, primarily due to higher non-oil imports (and despite lower oil imports which constitute about 20% of total merchandise imports). The impact of the earthquake on the agricultural and manufacturing sectors will also hit merchandise exports in the remaining months of FY2015.

Furthermore, tourism earnings will also be negatively affected as mountaineering and trekking activities have been closed for the rest of this season. Popular trekking routes, world famous heritage sites, and many hotels have either been destroyed, require major repair, or need careful structural assessment.

The combined effects of these will likely bring down Nepal’s current account surplus to about 1.0% of GDP this fiscal year, down from 4.7% of GDP in FY2014.

In FY2016, despite an expected moderate rebound in remittance inflows, substantially higher imports will likely push the current account to a deficit of 1.5% of GDP. Exports will likely rise marginally primarily due to a rise in manufacturing output next year but imports will likely increase drastically as a lower agricultural harvest will likely mean higher food imports to meet demand. Rehabilitation and reconstruction efforts will also necessitate importing items ranging from industrial inputs to heavy machinery and construction materials. This will further widen the trade deficit.

Meanwhile, the picture on migration (and subsequently workers’ remittances) is unclear as of now, but a highly probable scenario is that there will be a net increase in the number of emigrant workers if reconstruction projects are slow to get off the ground, resulting in a lack of job opportunities. The severely affected 14 districts account for about 18% of total migrant outflows and 13.6% of total remittance inflows. Overall, current account balance, and the balance of payments, will largely depend on the imports and remittances inflows. 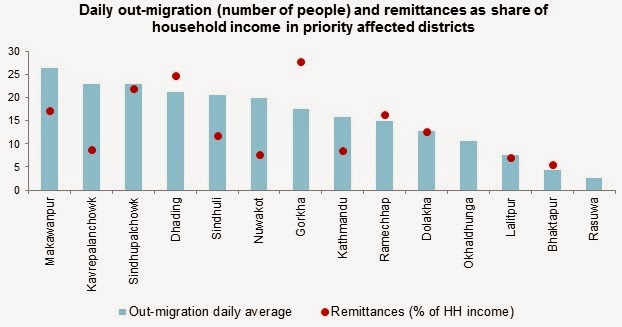 Fiscal balance. About 60% of total capital spending typically happens in the last three months of the fiscal year. The earthquake and subsequent aftershocks have delayed planned project implementation and forced the government to realign its focus toward immediate relief and rehabilitation efforts before the onset of the monsoon. Any perceived excess funds that are unlikely to be spent this year have already been diverted for this purpose. The 14 severely affected districts together account for about 58% of total capital spending in the country. Hence, overall capital spending will fall below the government’s NRs117 billion target set for FY2015. In fact, actual capital spending has averaged just 76% of budgeted allocations in the past three years. Recurrent spending will likely be over 95% of budgeted allocation (about 65% of allocation).

Meanwhile, the disruption to regular economic activities has slowed demand for both domestic and imported goods, which have undermined overall revenue mobilization. Import-based revenue accounts (custom duties, value added tax and excise on imports only) for about 45% of total revenue. 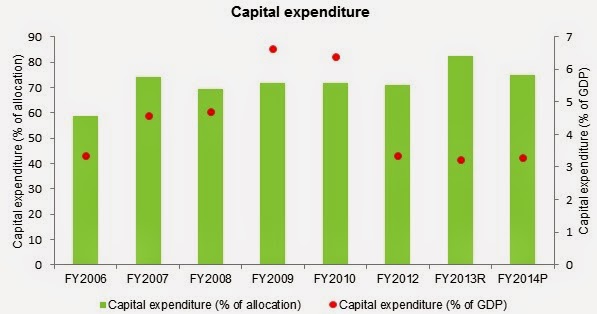 Consequently, the government is projecting a revenue shortfall of about $300 million (against a FY2015 revenue target of $4.4 billion, which includes grants as well). To cover a part of the immediate relief, rehabilitation and reconstruction costs, the government is raising about $500 million from bill and bond sales in the next two months. Hence, a marginal slowdown in expenditure, a bigger-than-expected revenue shortfall, and a comparatively large volume of domestic borrowing in the coming two months will likely increase the fiscal deficit to about 1% of GDP this year, up from 0.1% of GDP in FY2014.

In FY2016, revenue will likely rebound modestly with an increase in consumption of imported and domestic items. Meanwhile, capital spending will increase to cover rehabilitation and reconstruction costs. The government has estimated the preliminary cost for reconstruction at $5 billion to $10 billion spread over a few years. Consequently, the fiscal deficit will likely be higher than 2% of GDP in the next few years. Its exact level will be contingent upon the contribution from development partners (mainly grants). Meanwhile, the government has set up a National Reconstruction Fund of $2 billion to which it has contributed $200 million. It hopes to raise the rest from donors during the international donors’ conference expected to be held in coming months.

Priorities. The government is winding down rescue operations and is gradually focusing on relief efforts in view of the start of the monsoon season in the second week of June. Together with relief efforts, rehabilitation and reconstruction planning, institutional arrangement and implementation will gather pace. In this regard, the following priorities may be considered:

Posted by Chandan Sapkota at 1:47 PM No comments: