Costs of climate change and adaptation to Nepal

A new ADB report on the costs of climate change and adaptation (full report here) argues that Nepal would see economic losses equivalent to up to 2.2% of annual GDP by 2050, widening to 9.9% by the end of the century. If mitigation and adaptation steps are taken, the damage could be limited to around 2.4% of GDP by 2100. 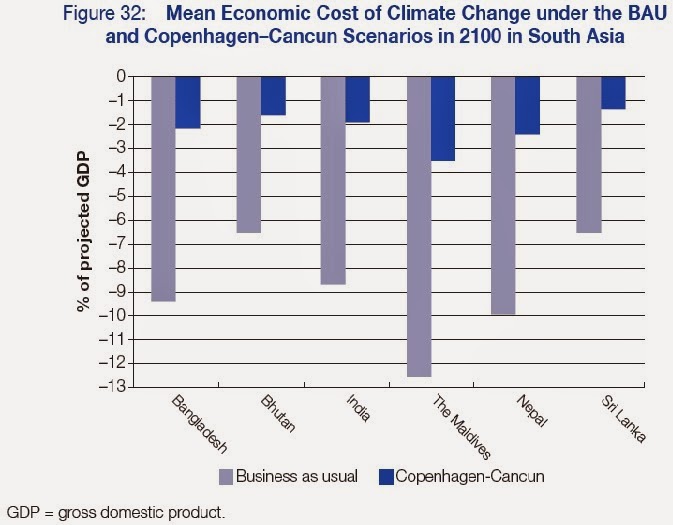 The report states that Nepal’s agriculture sector may reap short-term gains from warmer temperatures and melting snow and ice, (annual rice production could increase by as much as 16% in Nepal’s hills and mountains by 2080) but the glacial retreat and uncertainty about the summer monsoon’s start and end dates may reduce crop yields, causing food insecurity. Furthermore, melting glaciers, if suddenly breached, could cause catastrophic flooding downstream, posing risks to both human settlements and hydropower systems. In mountainous areas, landslides are likely to increase, threatening lives and infrastructure. Deteriorating and dwindling forests will result in habitat losses for some of the country’s rich flora and fauna, including snow leopards, undermining the country’s appeal for ecotourists.
In South Asia, the Maldives and Nepal would be the hardest hit, losing up to 12.6% and 9.9% of their economies, respectively, every year, by 2100. Meanwhile, Bangladesh would lose 9.4%, India 8.7%, Bhutan 6.6%, and Sri Lanka 6.5%.

The cost of climate change adaptation measures in South Asia will depend largely on how the global community tackles the issue, the report says, noting that if the world continues on its path, the region will need to spend at least $73 billion, or an average of 0.86% of its GDP, every year between now and 2100 to adapt to the negative impacts. On the other hand, if countries act together to keep the rise in global temperatures below 2.5°C, the cost of South Asia shielding itself from the worst of the impacts would be nearly halved to around $40.6 billion, or 0.48% of GDP.

The report does not provide detailed adaptation cost projections on a country basis, although in the energy sector it notes that a rising gap between demand and supply could see Nepal face an annual adaptation bill of over $118 million in the 2030s, rising by another $100 million in the 2050s.
Almost all areas of South Asia will suffer as temperatures rise. While farmers in some parts of the region may benefit from warmer weather, overall the impact on agriculture will be negative. Annual rice production could increase by as much as 16% in Nepal’s hills and mountains by 2080, but drop as much as 23% in Bangladesh, Bhutan, India, and Sri Lanka by that time.

Other highlights:
Posted by Chandan Sapkota at 10:19 AM No comments: