Total illicit financial outflows from Nepal over the period 2000-2009 is estimated to be US$6.040 billion, according to a new report titled ‘Illicit Financial Flows from Developing Countries over the Decade Ending 2009’ by Global Financial Integrity (GFI). It is an average of US$604 million each year between 2000 and 2009. If you consider normalized figures, then it is estimated to be US$5.921 billion. The study tracks the amount of illegal capital flowing out of 157 different developing countries over the 10-year period from 2000 through 2009, and ranks the countries by the magnitude of illicit outflows.

It is strange to to see a drastic decline in illicit financial outflows in 2009. I am still hunting for reasons. Some of the possible reasons could be a decrease in trade volume, FDI and new external loans. All of these variables (except FDI) saw downslide in 2009, but I still have to look at them carefully to be sure why there is so much of decline in 2009. 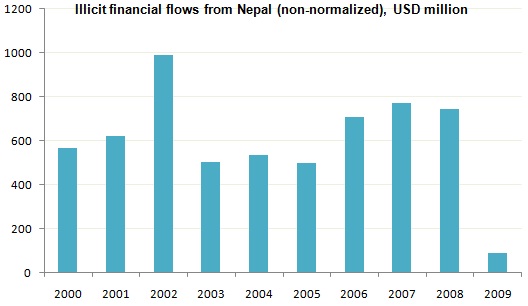 The cumulative figures for illicit outflows are computed based on official balance of payments (change in external debt, net FDI, current account balance, and change in reserves) and trade (exports and imports) data reported to the IMF by member countries and external debt data reported to the World Bank by those countries. It has normalized and non-normalized data for GER (Gross Excluding Reversals-Trade Mispricing) method and CED (Change in External Debt- Balance of Payments) model. Adding these two gives the estimation for illicit financial outflows. Normalization for GER is done by considering outflows in at least 6 years over the 10 year period and has to be great than 10% of exports that year. And, normalization for CED is done by considering outflows greater than 10 percent of exports that year. Unrecorded capital leakages through the balance of payments (CED component) capture illicit transfers of the proceeds of bribery, theft, kickbacks, and tax evasion. The GER method captures the outflow of unrecorded transfers due to trade mispricing.

Anyway, lets look at non-normalized figures only. Nepal ranked 83rd our of 157 countries in terms of the amount of cumulative illicit financial outflows over 2000-2009. In South Asia, Nepal is ranked fourth with US$6.04 billion illicit outflows. India (US$128.43 billion) ranked first, followed by Bangladesh (US$16.28 billion), and Pakistan (US$14.49 billion). Illicit financial outflows from Sri Lanka over the same period was US$2.99 billion, Afghanistan US$1.71 billion, Maldives US$1.35 billion, and Bhutan US$0.16 billion. 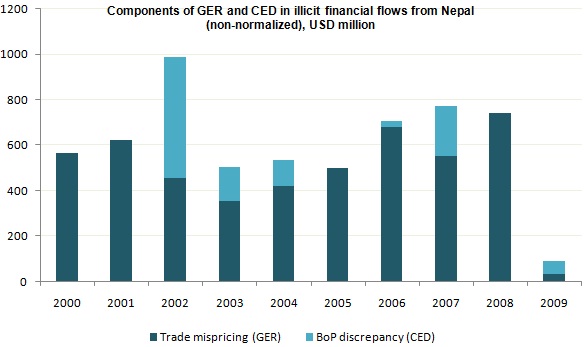 No wonder there was furor over the fake VAT bill scam, import over-invoicing (illicit outflows from a country will be indicated if the country’s imports are overstated with respect to world exports to that country), export under-invoicing (illicit outflows from a country are indicated whenever exports of goods from that country are understated relative to the reporting of world imports from that country adjusted for the c.i.f. factor), and misappropriation of Indian currency. Lately, the Inland Revenue Department (IRD) has completed investigation against 413 of the total 518 cases under investigation. The IRD´s crackdown against the fake VAT receipt scam in December 2010 had revealed widespread use of fake VAT receipt and had estimated the cost to be around Rs10 billion (over $135 million). Hopefully, the latest anti money laundering initiatives will help stem illicit financial outflows from Nepal.

More from the report:

Illicit financial outflows from developing countries in 2009 was between US$775 billion and US$903 billion. This figure is actually a drop from previous illicit financial outflows of between US$1.26 trillion and US$1.44 trillion in 2008. It was caused mainly by a decrease in international trade volume, FDI and new external loans. The report argues that the decrease in illicit outflows has nothing to do with government action to stop it. The report states that the illicit outflows are approximately 10 times the amount of official development assistance (ODA) going into developing countries.

The main factors leading to illicit financial outflows are bribery, kickbacks and the proceeds of corruption in MENA and developing Europe . However, trade mispricing is the main channel for such flows out of Asia and the Western Hemisphere. Trade mispricing (to avoid duties or taxes) accounted for 53.9 percent of cumulative illicit flows from developing countries over the period 2000-2008.

The report states that increasing transparency in the global financial system is critical to reducing the outflow of illicit money from developing countries. It recommends the following to control illicit financial flows:

Posted by Chandan Sapkota at 10:27 PM No comments: