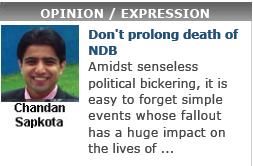 Few months ago, I wrote an op-ed arguing for a swift liquidation of Nepal Development Bank (NDB). Four months down the road, the whole issues looks as inconclusive as the political process in Nepal. In a new op-ed, I argue that the court should not stop the NRB from fully liquidating NDB. The unhealthy financial posture of NDB should not even be an issues of concern-- it is a moribund bank and should be put to rest without delay so that poor depositors can get their frozen savings back. Plus, this will help cleaning up of the Nepalese financial system.

Amidst senseless political bickering, it is easy to forget simple events whose fallout have a huge impact on the lives of general public. A sense of urgency felt by the public is not necessarily shared by the politicians, policymakers and judges. One of such events is the drama surrounding liquidation of Nepal Development Bank (NDB), the financially troubled bank whose liabilities are far more than its assets. The indecisive action from the court, though a lately decisive one from the central bank, has deprived many households of their savings.

Let us recall what happened four months ago. Sensing a deteriorating financial health of NDB, depositors started pulling money out of the bank. The loss of depositors’ confidence on the bank was unsurprising. It had bank deposits and cash worth Rs 196.2 million but its cumulative loss amounted to Rs 609.2 million. Nonperforming loans (NPL) comprised over 50 percent of loan portfolio. Its negative capital ratio of 48.31 percent was far less than 11 percent allowed by the central bank.

In a matter of a few days, it seemed that NDB was more contagious than was thought before, i.e. the panic triggered from a single near-dead bank was putting other healthy financial institutions at risk of bank runs. To contain the bubbling panic among anxious depositors, the central bank (NRB) guaranteed to be the savior of last resort. Meanwhile, it made the right decision to liquidate NDB. It froze transactions and took control of the bank. To fully liquidate the distressed bank, the central bank sought permission from Patan Appellate Court. On July 29, the court tasked chartered accountant Tirtha Raj Upadhaya to present a report explaining if it was necessary to liquidate NDB. While depositors are anxiously waiting to get their money back, the process of liquidation is progressing, if any, at a snail’s pace.

Limited and confusing information about the whole process has further worried depositors. The need to urgently take a final decision about the fate of NDB (which I personally think should be put to rest for good) is not shared by the judges of Appellate Court, further increasing confusion and anxiety among depositors. The situation is so confusion and so little information is channeled to the public that one of the worried elderly depositors emailed me asking when he will get back his hard-earned money, which he saved in NDB so that he could use it for his daughter’s marriage. He was so confounded and nervous that he requested me to “write something sympathetically.”

The court’s decision to deliberately prolong the crisis with complete disregard to the fate of poor depositors is the main constraint in putting to rest the moribund bank. It seems that the judges at the court do not trust technical and relatively specialized analysis from the central bank, which probably has the most relevant information about the financial sector than any other institution in the country. The decision to appoint a chartered accountant to reassess the health of an unhealthy bank and deliberately protract the liquidation process shows inefficiency and incompetency of the court in dealing with financial issues.

A consultant who assisted with projects a decade ago to evaluate Nepal’s financial institutions and who has interviewed the then head of NDB argues that the bank’s management was cooking up methods to swindle money away from the financial system to their personal treasure chests. He says: “It seemed to me then that the NDB’s main function was to shovel government rupees into private pockets ... the inability of the NDB staff to answer basic questions about their lending practices indicated that much was amiss at that institution ... I guess well-connected parties were able to delay recognition of the problem and enforcement of the directive so they could continue to misappropriate the people’s resources.” The unhealthy financial posture and practice of NDB was apparent a decade ago but the concerned authorities, mainly the NRB, stayed mute, downplayed the evolving superficial banking practices and basked on the performance of a few healthy commercial banks.

Now, a quick liquidation is in the interest of the whole banking industry, its poor depositors and the nation. The judges have to comprehend this and let NRB, despite its questionable record to prevent NDB-type banking practices in the past, handle the situation as appropriate. Else, it will foster a situation where banks will take excessive risk and willfully play with depositor’s money thinking that in case of failures, the central bank would come to their rescue. The court should help minimize moral hazard in the banking industry by ratifying NRB’s request to liquidate NDB.

Meanwhile, the central bank should not let the banks take excessive risk, channel huge amount of money to few creditless, politically-affiliated borrowers and engage in any activities that could put poor depositors’ money at excessive and irrecoverable risk. The NDB’s big defaulters should also be punished, although I am not convinced this will happen given the progress in indicting big defaulters in the past. Perhaps, what the consultant observed would be true: “I wonder whether any of NDB’s defaulting borrowers need to be concerned about facing punitive action, or at least public humiliation. Based on my experience in Nepal, I would guess not. At that time, the NRB had a “blacklist” of defaulters but it was highly classified and to the best of my knowledge was not available to commercial banks, except perhaps, on a case-by-case basis, through the NRB’s representative on the Board. So the same people could, at least in theory, keep pulling the same scam over and over.”

Two things warrant immediate attention. First, the judges should give a green signal to liquidate NDB as soon as possible so that poor citizen’s frozen money is freed up. The liquidation should be carried out even if few investors show half-hearted interest in reviving the bank. Second, the NRB should annually publish the list of all big willful defaults to promote transparency and accountability in the banking industry. This will stop big defaulters from exploiting depositor’s money. It will also break the exclusive availability of defaulters list to the board of directors of NRB, who, by the way, privately or publicly advise some of the commercial banks. This is the time for the court and NRB to improve upon their unqualified judgment of the past. 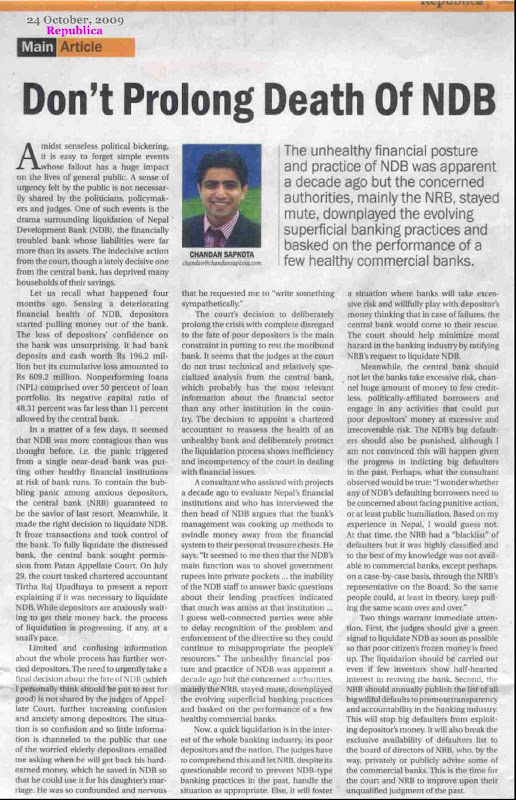 Posted by Chandan Sapkota at 12:25 PM No comments: