It was published in The Kathmandu Post, 10 April 2017.
Rosy growth outlook

The prospect of a rosy economic outlook for FY2016-17 dominated headlines and discussions over the past two weeks. Some political analysts and commentators were quick to attribute the cautiously optimistic outlook to the work of the coalition government. Targeting the upcoming local elections scheduled for May 14, the major political parties will construct narratives around this rosy economic scenario to best suit their agenda.

However, before being carried away by the party-centred narratives, it is necessary to note that such economic forecast is always conditional on key factors moving in the intended direction. It is also necessary to distinguish between autonomous drivers of growth and the ones that can be directly attributed to the government’s efforts. Importantly, the focus should be on implementable strategies to sustain a high growth rate.

The previous government had set a target of 6.5 percent for gross domestic product (GDP) growth and 7.5 percent for inflation in the FY2017 budget speech. Considering the dip in economic activities in the FY2016 that resulted in a GDP growth of only 0.8 percent, the target was ambitious but not entirely impossible given the expected large base effect and favourable monsoon rains. In general, base effect refers to the tendency of achieving an arithmetically high rate of growth when starting from a very low base. Hence, simply the normalisation of economic activities disrupted by the crippling embargo and the lingering impacts of the earthquakes would have generated a high growth rate.

In its 2017 Article IV consultation report, the International Monetary Fund (IMF) revised its growth forecast showing an increase of 5.5 percent. Similarly, in its biannual Macroeconomic Update, the Asian Development Bank (ADB) also made an upward revision of its earlier forecast and estimated GDP growth to hover between 5.2 and 6.2 percent. On an average, it expects GDP growth to be around 5.6 percent. 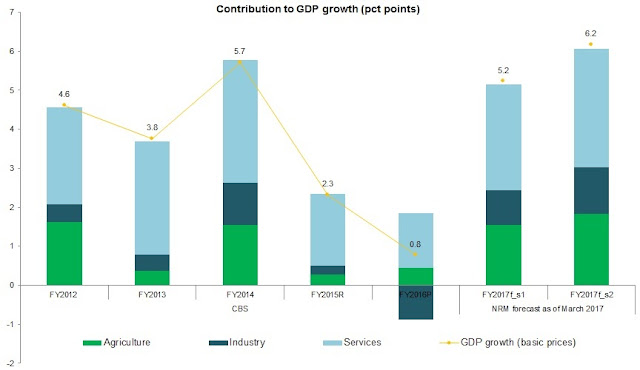 Meanwhile, the Central Bureau of statistics (CBS), the official government agency in charge of national account estimates, will release its own provisional growth estimate later this month by analysing available data up to the first seven to eight months. The CBS will revise its FY2017 growth estimate in the next fiscal year and then finally provide an actual estimate in FY2019. A general trend is that the actual estimate is lower than the provisional estimate. A GDP growth of over 6.1 percent will be the highest since the FY1992.

Although the point estimate is slightly different among these agencies, the underlying reasons for the upward revision of growth forecasts are similar. The events observed in the first seven months or so and the expected direction of key factors in the remaining five months form the basis for such forecasts.

First, the above average monsoon rains and timely availability of chemical fertilisers have resulted in a bumper agricultural output, which according to the Ministry of Agricultural Development will be at record levels. It constitutes about 33 percent of GDP and is a significant driver of GDP growth. While monsoon rains are beyond the government’s control, a smooth supply of chemical fertilisers and, to some extent, maintenance of irrigation facilitates are definitely affected by its actions.

Second, industrial output, which registered a negative growth last year, is expected to be robust. The modest increase in capital spending (in level but not in absorption rate) and post-earthquake reconstruction activities will boost mining and quarrying as well as construction activities. Furthermore, the substantial improvements in electricity supply and its management and a favourable investment climate thanks to the notable work of the Ministry of Energy and the Ministry of Industry respectively will significantly boost manufacturing activities.

Finally, the addition of electricity from small hydropower projects as well as some improvement in the collection and distribution of water will boost growth of the electricity and water sub-sectors. These four sub-sectors collectively constitute the industrial sector, which is expected to grow at one of the highest rates in recent decades. This is where this coalition government’s actions are most visible and commendable.

Third, services output, which constitutes about 52 percent of GDP and has been the most stable and largest contributor to growth, is expected to be higher than the last two years, but not as high as in FY2014. The main reasons are the deceleration in remittance inflows and expectations of political instability in the Tarai region.

These headwinds will likely be offset by tailwinds expected from the normalisation of supplies and tourism activities, local elections-related expenses and a slight uptick in demand following the disbursement of housing grants in the last two quarters. Although the government’s direct contribution in services sector growth is marginal, it is nevertheless visible from its performance in the sub-sectors of education, public administration, defence and health care. The proactive role played by the Ministry of Health under Gagan Thapa will be especially noticeable in the improved performance of the health sub-sector.

Overall, the most notable contributions of this coalition government are that it gave continuity to the contentious budget introduced by the previous government and then made commendable efforts to reinvigorate economic activities— especially through stable electricity supply, acceleration of post-earthquake grant disbursement, nudging the line ministries to scale-up the pace of capital spending (including Melamchi project related works), improving investors’ confidence and making remarkable improvement in the health sector.

That said, a larger contribution to the overall growth will still come from two key exogenous factors: monsoon rains and remittance-backed demand in the services sector. Optimistically higher growth would depend on the government’s efficacy in budget execution and fewer hassles in administrative procedures in the remaining months.

This sort of seemingly one time spurt in growth does not mean that the economy has changed its structure and will sustain high growth in the coming years. We are miles away from reaching a stage where we can sustain a high growth rate and bring about a rapid and meaningful economic transformation. The favourable monsoon rains and remittance-backed demand of imported goods are the default factors that help maintain an average growth of about 4 percent. Achieving and sustaining growth of over 7 percent requires consistent and committed political leadership, a competent bureaucracy and inclusive institutions.
Posted by Chandan Sapkota at 6:35 PM No comments: