This blog post is adapted from Macroeconomic Update, August 2014, Vol.2, No.2. Here is an earlier blog post on FY2015 GDP growth and inflation forecasts.

Gross domestic product (GDP) grew by an estimated 5.2% in FY2014, up from 3.5% in FY2013, as a result of the bumper agricultural harvest, moderate recovery in construction, and robust services activities backed by high remittance income (Figure 1). The services sector contributed about six-tenths of the GDP growth, largely coming from wholesale and retail trade; and transport, storage and communication activities. The agriculture sector’s contribution to the GDP growth stood at three-tenths and the industry sector contributed about one-tenth. 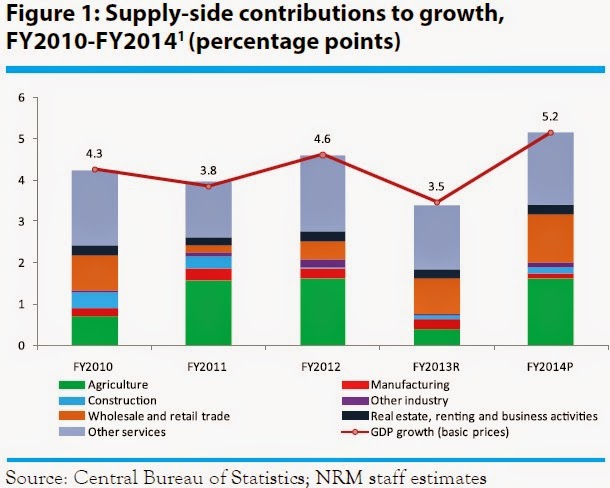 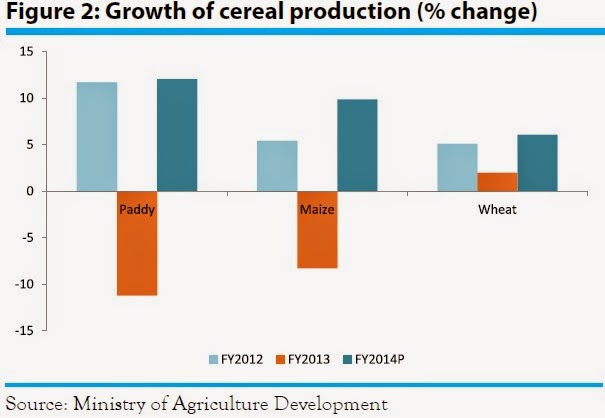 The industry sector, which comprises a mere 15% of GDP, grew by an estimated 2.7%, marginally up from its 2.5% growth rate in FY2013, as construction, and electricity, gas and water grew modestly despite a slowdown in manufacturing. The timely budget and modest acceleration in actual capital expenditure (though still low compared to the planned expenditure) propelled construction activities growth to 2.9%, up from 1.9% in FY2013. Manufacturing activities grew by 1.9%, the lowest rate in the last five years, primarily due to the impact of long hours of power cuts, persistent supply-side constraints, and the rise in cost of production due to the increased prices of imported raw materials. Concrete, sugar, aluminum materials, vanaspati ghee, paper, biscuits and beer production fell by over 30% in the first two quarters of FY2014. The average capacity utilization of key industries remained at 49.9% in the first half of FY2014, slightly higher than the 44.7% capacity utilization recorded in the first half of FY2013.[3]

The remittance-induced consumption demand propelled services sector growth to an estimated 6.1%, the highest growth rate in the last six years. The services sector, which comprises about 51% of GDP, grew by 5.2% in FY2013. Within the services sector, wholesale and retail trade— whose share in GDP was 14.9% in FY2014, higher than the share of the industry sector— grew by an estimated 8.8%, two percentage points higher than in FY2013 (Table 1). Wholesale and retail trade’s contribution to GDP stood at 1.32% in FY2014, up from 0.98% in FY2013, reflecting the strong growth of remittance inflows, which boosted consumption demand of imported goods. The increase in the number of tourist arrivals and its positive impact on spending boosted hotel and restaurant activities by an estimated 7.1%, up from 5.5% in FY2013. Driven largely by the robust increase in communication related activities, the transport, storage and communication sub-sector grew by 7.5%, marginally up from 7.4% growth in FY013. The slow recovery of real estate, renting and business sub-sector, which grew by 3.0% from 2.7% in FY2013, reflected the tight sectoral credit policy imposed by the central bank on banks and financial institutions.[4] 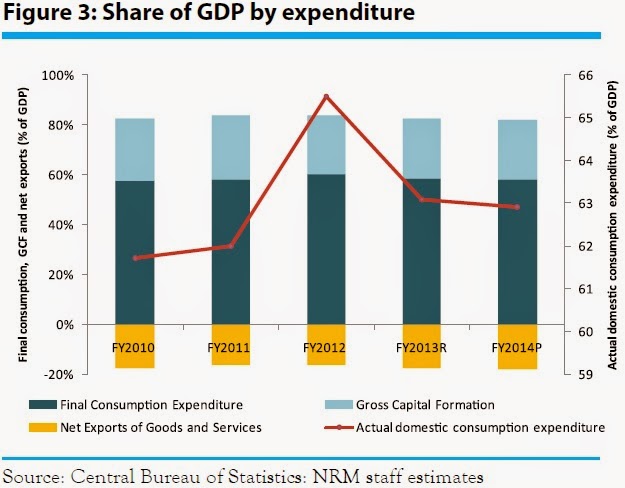 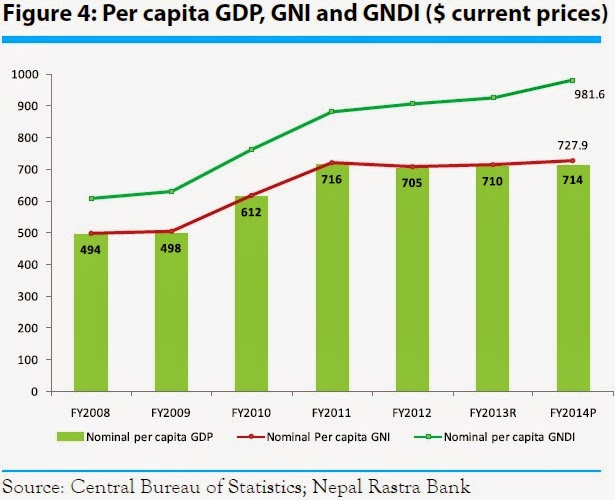 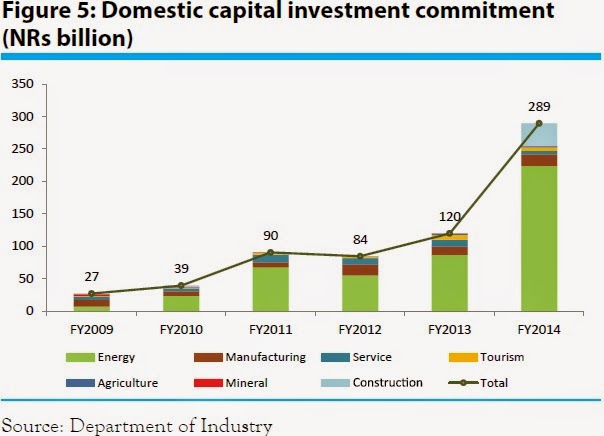 Foreign direct investment (FDI) commitment: FDI commitment, approved by the Department of Industry, reached NRs20.1 billion in FY2014, marginally up from NRs19.8 billion in FY2013 (Figure 6). It translates into a growth of just 1.5% compared to 115% in the previous year. Consequently, as a share of GDP, it stood at a mere 1.04%, lower than 1.2% of GDP in FY2013. That said, while the FDI commitment in manufacturing, mineral, service and tourism sectors decreased, the energy sector saw an impressive 306% growth, mostly coming from India and China—which together accounted for 91% of the total energy FDI commitment. Country-wise FDI commitment shows that the People’s Republic of China (PRC) surpassed India as the top FDI source country with a 36.4% share of total FDI commitment in FY2014. The other top FDI source countries are South Korea, Cook Islands, USA, Japan, British Virgin Islands, and Singapore— together accounting for about 20% of total FDI commitment. It may be noted that despite the increase in FDI commitment, actual FDI inflow, as per the balance of payments, significantly decreased from NRs9.1 billion in FY2013 (0.5% of GDP) to NRs3.2 billion in FY2014 (0.2% of GDP). 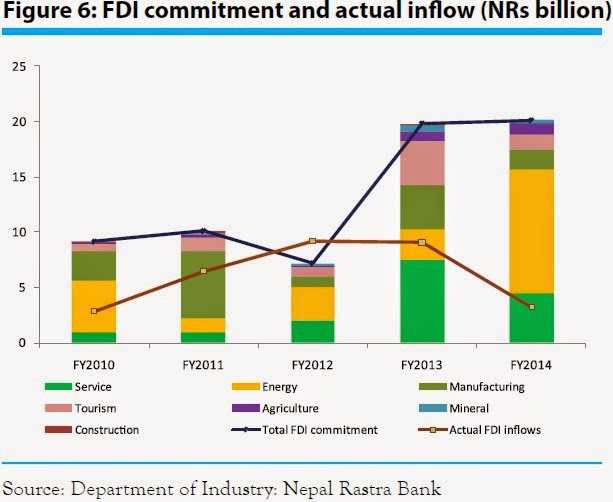 [4] Responding to the busting of real estate and housing bubble, triggered by a decline in the growth of remittances in FY2011, and a build-up of non-performing loans, the central bank imposed a lending cap of 25% to this sector in FY2012. It contributed to the cooling down of prices in this sector.

[5] The GDP by expenditure data are prone to measurement errors as change in stocks is computed residually, which also includes statistical discrepancy/errors. Change in stocks was estimated to be 13.9% of GDP in FY2014. A large residual indicates that a significant portion of the GDP is either unexplained or could not be directly attributed to its components, i.e. consumption, capital formation and net exports.

[8] Computed as the difference between gross national savings and gross capital formation.

Posted by Chandan Sapkota at 9:03 PM No comments: