Easterly on The Growth Report

Easterly loathes planners. This time he blasts Michael Sepence and his team their their two year long research on finding the sources of growth. He argues that the outcome of $4m investment on Commission on Growth and Development is an inconclusive big report; their answer to high growth, as Easterly reads the report, is: "we do not know, but trust experts to figure it out."

My students at New York University would have been happy to supply statements like these to the World Bank for a lot less than $4m.

[...]The Growth Commission correctly pointed out that such an attempt to find secrets to growth has failed. The Growth Commission concluded that “answers” had to be country specific and even period specific. But if each moment in each country is unique, then experts cannot learn from any other experience – so on what basis do they become an “expert”?

[...]The commission made the common mistake of anointing high growth rates as the measure of success, whereas high growth mysteriously comes and goes. Indeed, only two of the 13 high-growth episodes the commission studied were still going at the time of the study. Yesterday’s growth failures (for example India) are today’s successes and yesterday’s growth successes (for example Brazil) are today’s failures. Much of this volatility is inexplicable and unpredictable. To give credit to whatever leader happens to be in power during a burst of high growth is just circular reasoning (How do we know they were a great leader? Because there was high growth!).

As always Easterly blasts the WB and similar 'development expert' models. He argues that growth is accidental and unpredictable by bringing in Hayekian perspectives of serchers and spontaneous order.

What to do in a world of such unpredictability? There are some general principles and they do not require experts. Another Nobel laureate gave the crucial insight a long time ago – the answer is freedom for multitudinous individuals to figure out their own answers. Friedrich Hayek said: “Liberty is essential to leave room for the unforeseeable and unpredictable; we want it because we have learned to expect from it the opportunity of realising many of our aims. It is because every individual knows so little and ... because we rarely know which of us knows best that we trust the independent and competitive efforts of many to induce the emergence of what we shall want when we see it.”

The evidence for this vision is not found in those baffling fluctuations of growth rates, it is in the levels of development attained in the long run. Confirming Hayek, systems that give more liberty to individuals – featuring both more economic and political freedoms – are associated with much less poverty. The evidence for this comes from both history (for example old, despotic, poor Europe compared with modern, free, rich Europe) and cross-country comparisons (for example South Korea compared with North Korea, former West Germany compared with East, New Zealand compared with Zimbabwe). This alternative paradigm has a much smaller role for experts, because experts cannot direct or impose freedom from the top down (or else it would not be freedom).

I do not totally agree with Easterly and think that industrial policy and highly specific government intervention can work to rectify market failures. More here and here. More on the Growth Report here and here.
Posted by Chandan Sapkota at 9:54 PM No comments: 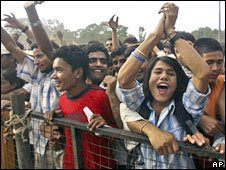 Today Nepal became the newest member of the federal republic clubs. Nepal was declared Federal Democratic Republic today by first meeting of the Constitution Assembly. With this comes the ending of centuries old monarchy in Nepal. More here. More from BBC News.

To loud cheers and resounding handclaps, the first sitting of the Constituent Assembly (CA) unanimously declared the country a republic late on Wednesday night, with only four votes against. The much-anticipated meeting took the decision late on Wednesday night after a nearly ten-and-a-half-hour delay, effectively ending the 240-year-old institution of monarchy and making the king an ordinary citizen.

The Chairman of the CA KB Gurung announced that the proposal to declare the country a federal democratic republic which was tabled at the CA meet was passed with a majority vote on Wednesday at the historic meeting held at the Birendra International Convention Centre (BICC) in the capital. Out of a total 564 votes, the proposal garnered 560 votes in its favour, while only four votes were cast against the proposal.

“In the context of implementing a republic in the country, the CA meeting directs the now then King residing at the Narayanhiti palace and the private secretariat structure concerning him to leave within fifteen-days,” said Gurung reading out the government’s decision. He also directed the Nepal government to immediately control and manage the Narayanhiti palace which has now become a national property.

Home Minister Krishana Prasad Sitaula, on behalf of Prime Minister Girija Prasad Koirala, tabled the proposal for the implementation of a federal democratic republic at the CA meeting before the final votes were cast.

The CA, elected through the landmark election held last month, formally passed the proposal, bidding farewell to the only Hindu King of the world.

Emerging from the meeting, NC leader and Minister for Peace and Reconstruction Ram Chandara Poudel said,” Today we have agreed to transform the country into a federal democratic republic and oust the king and replace it with a presidential system.” Poudel added that the cabinet will sort out all the remaining issues such as the powers and duties of the president and the Deputy-President. In a meeting held at Baluwatar in the run-up-to the first CA sitting, the ruling Seven-Party alliance (SPA) agreed on a provision of a constitutional president who will execute his duties on the recommendations of the cabinet. However, in what appeared to be an eleventh-hour syndrome, the major constituents of the CA failed to reach a common agreement on other key issues until late Wednesday evening.

The 601-member CA is assigned with the responsibility of writing a new constitution and ushering the country into a new era.

On Tuesday, a total of 568 CA members took the oath of office and secrecy after being elected in the landmark CA polls conducted under First-Past-the-Post and Proportional Representation electoral systems in April.

Posted by Chandan Sapkota at 1:24 AM No comments:

[...]It is a tale of two peoples. In one version of the story, a country with a lot of poor people suddenly experiences fast economic expansion, but only half of the people share in the new prosperity. The favored ones spend a lot of their new income on food, and unless supply expands very quickly, prices shoot up. The rest of the poor now face higher food prices but no greater income, and begin to starve. Tragedies like this happen repeatedly in the world.

[...]Much discussion is rightly devoted to the division between haves and have-nots in the global economy, but the world’s poor are themselves divided between those who are experiencing high growth and those who are not. The rapid economic expansion in countries like China, India and Vietnam tends to sharply increase the demand for food. This is, of course, an excellent thing in itself, and if these countries could manage to reduce their unequal internal sharing of growth, even those left behind there would eat much better.

But the same growth also puts pressure on global food markets — sometimes through increased imports, but also through restrictions or bans on exports to moderate the rise in food prices at home, as has happened recently in countries like India, China, Vietnam and Argentina. Those hit particularly hard have been the poor, especially in Africa.

There is also a high-tech version of the tale of two peoples. Agricultural crops like corn and soybeans can be used for making ethanol for motor fuel. So the stomachs of the hungry must also compete with fuel tanks.

[...]The global food problem is not being caused by a falling trend in world production, or for that matter in food output per person (this is often asserted without much evidence). It is the result of accelerating demand. However, a demand-induced problem also calls for rapid expansion in food production, which can be done through more global cooperation.

[...] While population growth accounts for only a modest part of the growing demand for food, it can contribute to global warming, and long-term climate change can threaten agriculture. Happily, population growth is already slowing and there is overwhelming evidence that women’s empowerment (including expansion of schooling for girls) can rapidly reduce it even further.

What is most challenging is to find effective policies to deal with the consequences of extremely asymmetric expansion of the global economy. Domestic economic reforms are badly needed in many slow-growth countries, but there is also a big need for more global cooperation and assistance. The first task is to understand the nature of the problem.

Posted by Chandan Sapkota at 12:42 AM No comments: