Dutch disease and its impact on the economy

How does a sudden favorable shock to the economy affect productivity dynamics and volatility? The favorable shock can be thought in terms of a large natural resource discovery, a rise in the international price of an exportable commodity, or the presence of sustained aid or capital inflows—all of which are hallmarks of Dutch disease. In a brief paper, Brahmbhatt, Canuto and Vostroknutova explore how natural resource wealth (or a Dutch disease) affects the economy. This blog post is largely based on their brief paper.

When there is a favorable shock to the economy, then a sort of structural changes take place though an expansion of the sector that favorably shocks the economy and a contraction or stagnation of other tradable sectors of the economy, which is usually accompanied by an appreciation of the country’s real exchange rate (note that real exchange rate is defined in this context as the price of nontradables relative to the price of tradables). When the booming sector is related to natural resource (like oil or minerals), the declining nonresource tradable sectors include manufacturing and agriculture. This might have severe welfare and development impacts.

First, via spending effect. As domestic income increases due to the booming natural resource sector, aggregate demand and spending goes up as well. This puts pressure on nontradables in the domestic market, leading to rise in demand and output. But, due to high demand wages also tend to increase in all the sectors, both tradable and nontradable. It will increase cost of production throughout the economy, leading to squeezing profits in the nonresource tradables sector (manufacturing), whose prices are pretty much fixed in the international market. This means customers will look for substitutes at cheaper price, thus reducing domestically produced nonresource tradables. This gradually erodes the existence of the whole sector itself. Note that price of nontradables are set in the domestic market, but the price of tradables are set in the international market. Second, via resource movement effect. Since wages are higher in booming natural resource sector, capital and labor are attracted to this sector from other sectors of the economy, reducing output in the latter ones. 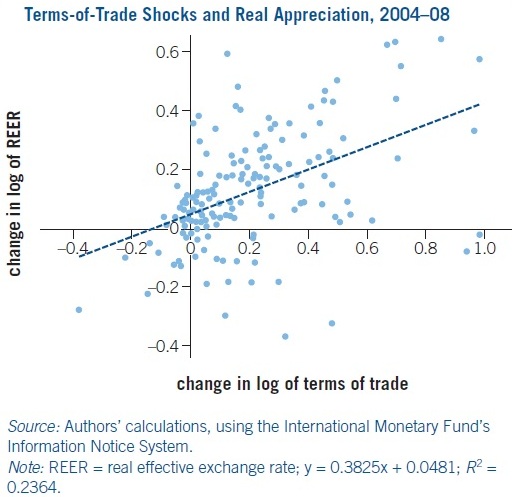 Both the spending effect and resource movement effect led to a decline in production of nonresource tradables relative to nontradables, and a real exchange rate appreciation (defined as a rise in the price of nontradables relative to that of tradables). The authors argue that there is “relatively robust evidence that terms-of-trade (TOT=export prices/import prices) increases cause real appreciation in natural-resource-rich countries”. This was also seen during the high commodity prices in 2007. However, the evidence on the shrinking of nontradables sector (manufacturing and agriculture) is not as clear cut as the impact of terms of trade increase on real real exchange rate appreciation in natural resource rich countries. Kareem Ismali has shown that a 10 percent increase in an oil windfall is associated with a 3.4 percent fall in value added across manufacturing sectors.

Regarding appreciation of exchange rate and growth, it is generally accepted that exchange rate overvaluation has a strong negative impact on growth. If investors think that the rise in terms of trade due to favorable natural resource shock to the economy is permanent, then it will affect growth negatively for a long time. (Subramanian and Rajan argue that aid tends to make a country less competitive, reflected in an overvalued exchange rate, which in turn depresses the prospects of a the more exportable sector). Regarding volatility, the concentration in one particular natural resource (Dutch disease) exposes the economy to greater price and demand fluctuations, thus affecting investment and growth.

So, the impact of natural resources on economy will depend on the kind of policies in place. Fiscal policy should be designed in such a way that there is smoothening of spending by keeping in place a sound spending mechanism out of the revenue from natural resource sector. Also, institutional arrangement should favor judicious management of revenue from natural resource sector. Strict fiscal discipline is a must. Also, direct spending towards tradables rather than nontradables would help slow the impact through the spending effect. Policies aimed at improving productivity in nontradable sectors should also be instituted. Also, trade liberalization would help reduce pressure on the nontradables sector. Instituting a mechanism to channel revenue from resource abundance sectors to developmental activities would help in judicious redistribution.

Owen Brader has a very useful policymakers’ guide to Dutch disease. Contrary to some of the studies, he argues that “it is unlikely that a long-term, sustained and predictable increase in aid would, through the impact on the real exchange rate, do more harm than good, for three reasons.”

First, there is not necessarily an adverse impact on exports from Dutch Disease, and any impact on economic growth may be small. Second, aid spent in part on improving the supply side--investments in infrastructure, education, government institutions and health--result in productivity benefits for the whole economy, which can offset any loss of competitiveness from the Dutch Disease effect. Third, the welfare of a nation's citizens depends on their consumption and investment, not just output. Even on pessimistic assumptions, the additional consumption and investment which the aid finances is larger than any likely adverse impact on output. However, the macroeconomic effects of aid can cause substantial harm if the aid is not sustained until its benefits are realized. The costs of a temporary loss of competitiveness might well exceed the benefits of the short-term increase in aid. To avoid doing harm, aid should be sustained and predictable, and used in part to promote economic growth. This maximizes the chances that the long-term productivity and growth benefits will offset the adverse effects--which may be small if they exist at all--that big aid surges may pose as a result of Dutch Disease.