The Ministry of Finance (MOF) released the mid-term review of FY2014 budget.  Despite the timely full budget, the government has been unable to spend money as expected. Particularly hit is capital expenditures, which are crucial to ‘crowd in’ private investments and create a foundation for growth to take off on a high and inclusive path.

As of mid-January 2014, the government was able to spend just 30.2% of total planned budget, 36.8% of planned recurrent expenditure, 13.5% of planned capital expenditure, and 18.5% of planned financing. The capital spending in the first half of FY2014 is actually lower than the proportion spent in FY2013, when the country did not even have a timely full budget. 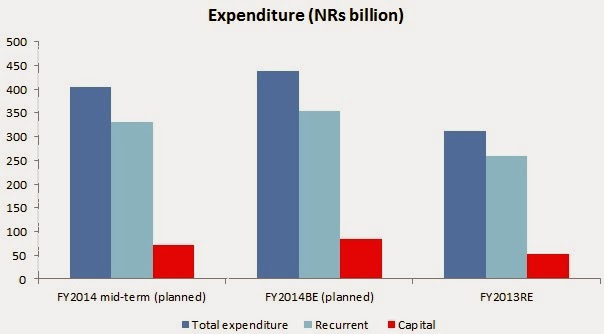 The lack of absorption capacity and readiness of various government ministries to meet planned spending targets have also led the MOF to revise down the expenditure targets itself. Particularly, planned capital spending has been revised down to NRs71.7 billion, down from NRs.85.1 billion planned when the full budget was unveiled in mid-July 2013. The revised planned capital expenditure is about 3.7% of GDP, down from the planned 4.4% of GDP. Furthermore, the inability to spend money in full and on time is also reflected in the revised down planned foreign grants and loans.

The higher planned budget [40.1% higher than FY2013 revised estimate; and according to the latest mid-term review target 20.9% higher than FY2013RE] is upping inflationary expectations, contributing to the prices pressures that are keeping inflation at a higher rate. Why target for higher planned expenditure when the ministries cannot spend the amount already allocated to them? It is doing more harm than good. May be performance based allocation should be the rule for each of the ministries. It is high time the government increased its absorption capacity.

The government is maintaining its 5.5% GDP growth target, but has revised inflation target up to 8.5%. The total revenue target is also scaled down. The budget is expected to be in surplus again this year. 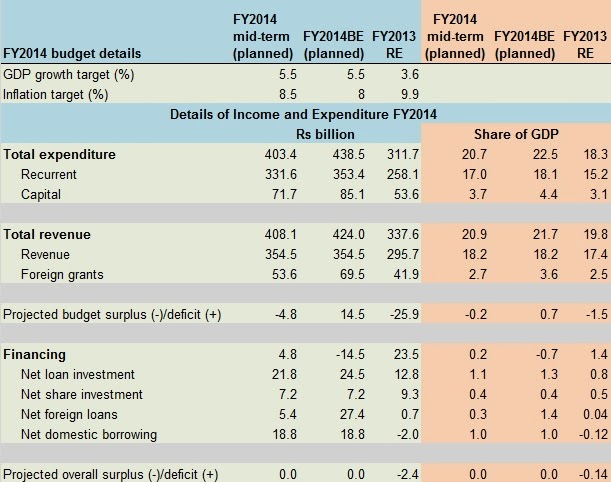 Posted by Chandan Sapkota at 7:26 PM No comments: