Evolution of exports and output in Nepal 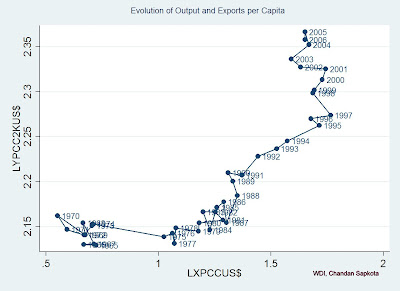 Does it mean that Nepal has no future in the exports sector? Well, it is difficult to grow at a rate of more than 5% just on the back of agricultural sector. Nepal has to find a way out to make a transition to export-based economy and home grown demand that is hinged on industrial production. This is the only way out to attain double-digit growth rate and some periods of growth acceleration.

This pushes one to think: so why is the export sector and the domestic demand for industrial output not increasing? Well, the main strongest constraints lie in poor infrastructure and increasing microeconomic risks (corruption, taxes, instability, property rights). More on these constraints on later posts.

Posted by Chandan Sapkota at 12:31 AM No comments: