Quality of education and economic growth

Here is a short piece about why the quality of education matters more for growth than just quantity of education (high enrollment rates). The authors argues that this (quality of education) might provide answers to the Latin American puzzle-- despite high school enrollment (partly also due to quantitative goals set by MDG--to ensure universal primary education by 2015), why Latin American is lagging in terms of economic growth. Good quality of human resource with high cognitive skills matter more to economic growth than simple quantitative goals. Not a very surprising result but they do statistical tests to provide more validity to this line of argument.

What has been missing is a focus on the quality, rather than quantity, of education – ensuring that students actually learn. While Latin America has had reasonable school attainment, what students in fact know is comparatively very poor. Latin American countries have participated infrequently in worldwide student achievement tests, but their students always rank near the bottom of worldwide comparisons. 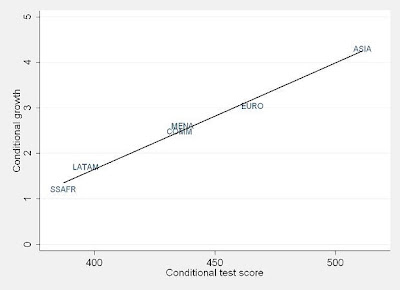 Source: Hanushek and Woessmann (2009b). Added-variable plot of a regression of the average annual rate of growth (in percent) of real GDP per capita in 1960-2000 on the 1960 level of real GDP per capita and average scores on international student achievement tests (mean of the unconditional variables added to each axis). Region codes: Asia (ASIA), Commonwealth OECD members (COMM), Europe (EURO), Latin America (LATAM), Middle East and North Africa (MENA), Sub-Saharan Africa (SSAFR).

As the figure makes patently clear, considering this low level of cognitive skills is sufficient to reconcile the poor growth performance of Latin America with outcomes in the rest of the world over the past four decades. Our interpretation is simple. Even though many things enter into economic growth and development, the cognitive skills of the population are extremely important for long-run growth.

The crucial missing link in explaining why Latin America went from reasonably rich in the early post-war period to relatively poor today is its low cognitive skills. […] Our results using the regional test data support the important role of cognitive skills in understanding Latin American growth. These test scores are statistically and quantitatively significant in predicting economic growth differences in intra-regional growth regressions. They increase the explanatory power of standard growth models considerably and render the effect of years of schooling insignificant. In sum, schooling appears relevant for economic growth only insofar as it actually raises the knowledge that students gain as depicted in tests of cognitive skills.

Posted by Chandan Sapkota at 11:49 AM No comments: