Electricity demand in Nepal in 2030

In a report published by the Investment Board of Nepal (IBN) the total energy demand is projected to reach 33,433 gigawatt hour (GWh), which is equivalent to 6,358 mega watt (MW) at 60% system capacity factor in 2030. Additionally, accounting for transmission loss (1,211 MW), outages (2,523 MW), and the constant daily demand load curve, the required installed capacity to meet energy demand in 2030 is 10,092 MW in 2030. A lower system factor (arising from supplementary sources such as storage plants and capacity increases in renewables) would mean higher installed capacities to meet demand. At 50% system capacity factor, the required installed capacity to meet energy demand would be about 12,000 MW. 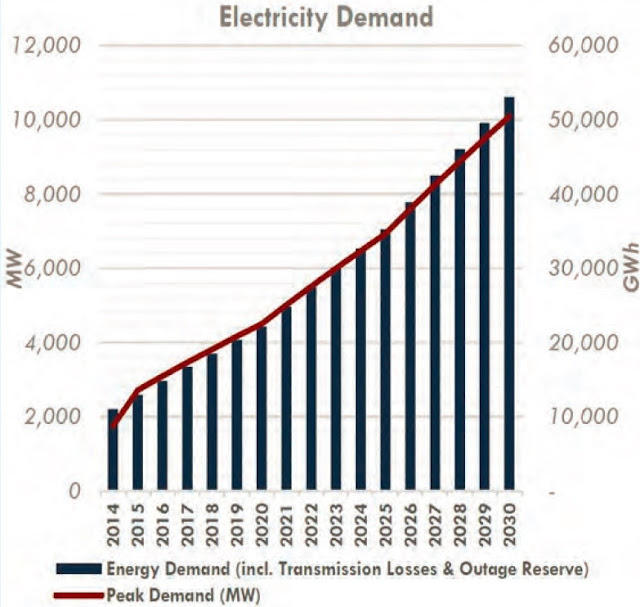 It uses the model for analysis of energy demand (MAED) to forecast energy demand in the next 15 years. This differs significantly from the linear energy demand projection. The model considers latent demand (for instance, switching from traditional cooling methods to air conditioning, from liquefied petroleum gas to electrical appliances to cook food, and from fuel to electricity to power up vehicles) in such forecast and takes into account the evolution of socio-economic, technological and demographic patterns.

While these projections may be on the higher side given the optimistic assumptions for sectoral growth and its pattern, the direction and magnitude of energy demand in the next 15 years points to a plausible scenario of large demand-supply deficit if the planned projects are not completed on time. This has to be accompanied by reform of the entire sector, including enacting and implementing the legal, regulatory, institutional and administrative reforms. NEA system losses are already one of the highest in the world. In FY2016 its system losses were 25.9%, up from 24.4% in FY2015. It largely reflecting a dated distribution system (including sub par transformers). The country faces a challenge to meet the energy demand given the slow pace of project implementation (generation, transmission and distribution).

Update: Lately, it has been reported that the new Minister for Energy Janardan Sharma has ordered new estimation of electricity demand. He has refused to take ownership of the study commissioned by the IBN in collaboration with the NPC. His main argument is that IBN is not the authorized body to estimate electricity demand. It should be Water and Energy Commission Secretariat (WECS). This is a useless argument and is an indication of the maze of bureaucratic hurdles (created by self-interested bureaucrats chasing and chased by lobbyists and politicians) and lack of ownership of a report published by a agency which is chaired by the Prime Minister. There is no need for another study by WECS, which will probably lead a committee to finalize a TOR for new consultant and then lobby for funds to finance the one-year-plus long study. If it goes through, then the contract would most likely go to one of the pseudo-consulting firms close to the bureaucrats or the politicians. Just another study report to employ currently unemployed pseudo-intellects.

The need is not for a similar study report for the sake of 'ownership'. The urgent need is to accelerate project implementation, especially the stalled hydro energy projects and administrative reform of the various agencies, including NEA and the energy ministry. The country doesn't have the luxury of time and resources to commission yet another study of long-term energy projection by the energy ministry. The priority should be to do the needful to ensure that the ongoing projects are completed on time.

Some bureaucrats, politicians and energy lobbyists have been objecting to the IBN's proactive role in promoting large-scale hydro energy projects since its establishment. They are not happy with the IBN as it is taking away their business interest and is really taking forward contentious projects in a short time. The energy sector needs to be protected from this group of bureaucrats, lobbyists and politicians.