A latest report from Global Financial Integrity (GFI) has ranked Nepal 58 out of 143 countries in terms of average annual illicit financial flows— the cross-border movement of money that is illegally earned, transferred, or utilized— between 2001 and 2010. On an average, from Nepal, between 2001 and 2010 US$801 million was illegally earned, transferred, or utilized. 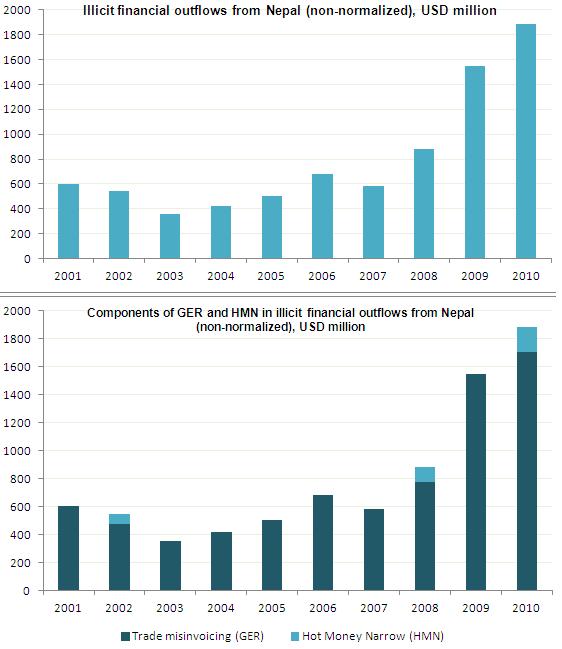 The figures are based on Hot Money Narrow Plus Trade Mispricing method (HMN+GER) non-normalized methodology. This methodology doesn’t include trade mispricing in services, same-invoice trade mispricing, hawala transactions, and dealings conducted in bulk cash. Last year’s report used a trade mispricing and external debt data and found that the total illicit financial outflows from Nepal over the period 2000-2009 was US$6.0 billion (cumulative outflows from 1990 to 2008 was estimated at US$9.1 billion). It uses the official balance of payments and trade data reported to the IMF by member countries and external debt data reported by those countries to the World Bank.

The GFI notes that illicit financial flows “generally involve the transfer of money earned through illegal activities such as corruption, transactions involving contraband goods, criminal activities, and efforts to shelter wealth from a country's tax authorities”.

Overall, crime, corruption, and tax evasion cost the developing world US$858.8 billion in 2010, just below the all-time high of US$871.3 billion set in 2008—the year preceding the global financial crisis. From 2001 to 2010, developing countries lost US$5.86 trillion to illicit outflows.

The GFI has called for increasing transparency in the international financial system as a means to curtail the illicit flow of money. The ones related to Nepal include (i) reforming customs and trade protocols to detect and curtail trade mispricing, which is done to avoid duties or taxes; (ii) harmonizing predicate offenses under anti-money laundering laws across all Financial Action Task Force cooperating countries; (iii) ensuring that the anti-money laundering regulations already on the books are strongly enforced.

Posted by Chandan Sapkota at 4:18 PM No comments: