Regional integration in South Asia and export-led growth in Nepal

Nepal is one of the most open economies in South Asia. It is also the poorest economy in the region. Achieving high growth driven by exports has been one of the major objectives for at least two decades now. The period between 1990 and 1996 saw one of the most astounding increases in exports and an impressive economic growth rate (7.9 percent in 1994). With high hopes of stimulating exports and growth, Nepal joined the WTO on April 23, 2004, becoming the first LDC to join the trading bloc through full working party negotiation process.

With this came the end of MFA in 2005, leading to a collapse of Nepali garment and textile industry, once the main driver of export-led growth. The gains from trade liberalization (economic growth and development goals) under the WTO have been pretty dismal. Exports, as a percentage of GDP, have declined to 15 percent. Meanwhile, imports, as a percentage of GDP, are ever rising, reaching 37 percent in 2008. The manufacturing sector is going downhill, registering a negative growth rate. Annual economic growth rate has stagnated below 5 percent.

Given the clear lack of benefits from the WTO regime, is there still room for export-led growth in Nepal? The answer is yes, provided that we focus on full integration into the regional markets and in signing FTAs with countries that possess potential markets for Nepali exporters. This also includes instituting right measures on trade facilitation and specialization on products that are relevant and within purchasing power of customers in targeted markets.

Even the Doha Round, for whose completion negotiations have been going on since 2001, is not favorable to Nepal. A World Bank study showed that total gains from the Doha Round would be as low as $96 billion and only $16 billion would go to developing countries. Worse, half of all the benefits that would go to the developing countries would go to eight countries (Argentina, Brazil, China, India, Mexico, Thailand, Turkey and Vietnam). For South Asia, real income gains would be about US$2.5 billion. India alone is expected to gain US$1.7 billion. There is very little, if any, at store for Nepal from the Doha Round. Worse, terms of trade, the relative prices of a country’s export to import, is expected to be negative, putting further strain on exports.

The gains from further integration into the regional markets could be more fruitful than the gains from further liberalization under the Doha Round. The booming Indian economy, with which our market is the most integrated among all the other markets, provides a huge potential for Nepali exporters. Already 62 percent of total trade takes place with India. More than 70 percent of exports go to India and over 60 percent of imports come from India. There are more than 300 million potential customers in the bordering states that Nepali exporters could cater to, provided that they produce goods based on taste, preferences and purchasing power of the customers. Furthermore, Nepal could piggyback on the success of over $15 billion software service exports industry in India, if it could work on enhancing human capital and incubating business units based on the needs of the software industry. The two economies are expected to integrate and trade even more after the recently signed trade treaty.

Charting out strategies to fully integrate with other SAARC nations would also help to stimulate investment and exports. Nepal exports more to SAARC members than it does to other nations. Nepal’s export to SAARC, as a share of its total exports, increased from 53.9 percent in FY 2003/04 to 72.5 percent in FY2007/08. Meanwhile, imports, as a share of total imports, from SAARC increased from 53.9 percent in FY 2003/04 to 67 percent in FY 2007/08. In this regard, expediting integration under SAFTA (and BIMSTEC) would produce more gains than from any other trading blocs. These two blocs (plus China) could be the most important markets for Nepali exports in the coming days. The future of export-led growth would depend on how much Nepal can capitalize from integrating with these markets with huge potential.

Note that among South Asian nations, Nepal has the highest volume of trade flows and trade intensity, the ratio of Nepal’s exports to a destination (SAARC) to its exports to the world. In 2006, it was 42.4. Nepal also has high trade complementarity, the degree to which export pattern of Nepal matches with imports pattern of other SAARC nations. For South Asia as an export destination, Nepal’s trade complementarity was 55.2 in 2006, which means that there are more favorable prospects for a successful regional trade arrangement. Focusing more on regional integration is also important to increase investment. FDI from SAARC has increased from US$3 million in FY 1998/99 to US$30 million in FY 2007/08. From other regions, excluding SAARC, FDI decreased from US$29 million in FY 1998/99 to US$ 18 million in FY 2007/08.

It should be noted that just joining regional trading blocs would not be an elixir to all the problems ailing the Nepali exports sector. One of the main reasons why the export-led growth strategy failed was because of Nepal’s lack of competitiveness in the international market. This was caused primarily due to internal labor disputes and lack of trade facilitation. Internal trade disputes in firms led to a disruption in production, a halt in manufacturing activities, an increase in labor costs, and a severe dispute over wage and permanent employment status regardless of labor competence and productivity. This was compounded by regular strikes along the main highway and energy shortage, leading to production and supply bottlenecks, and an increase in transportation costs. Add to this 50 percent higher logistics costs than average for transporting goods from Kathmandu to Kolkata port, there is a huge cost disadvantage.

If these issues are properly sorted out in time, then growth could be spurred by exports to regional markets. Nepal should focus on production of goods and services that have market potential in the regional markets, that could be exported with comparative advantage, and that are consistent with preferences and purchasing power of targeted customers. 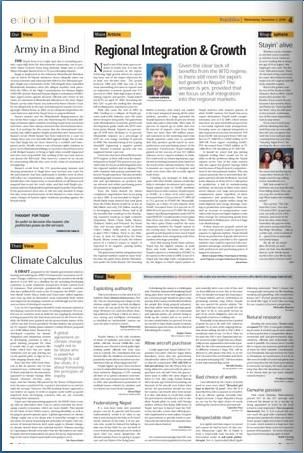 Posted by Chandan Sapkota at 6:34 AM No comments: