One more measure of inequality is out now. This one is said to be more broader than Gini coefficient index and tries to go well into the roots of inequality to figure out the role of lack of opportunities (that is inequality in opportunities) in human development. This new index called Human Opportunity Index (HOI) comes from the World Bank. Obviously, it focuses on Latin America, the most unequal region (going by the Gini coefficient) in the world. The HOI is calculated as  the average of HOI for education and the HOI for housing. The HOI measures the proportion of opportunities needed for children to attain universal access to basic services that are available and equitably distributed.

Between one fourth and one half of income inequality observed among Latin America and the Caribbean adults is due to personal circumstances endured during childhood that fell outside of their control or responsibility, such as race, gender, birthplace, parent’s educational level and their father’s occupation. These circumstances reveal the level of inequality of opportunity in the region.

The HOI shows how personal circumstances play in gaining or preventing access to those services needed for a productive life, such as running water, sanitation, electricity or basic education among children in the region. This opens up a whole new field of study dedicated to designing public policy focused on equity.

The composite index runs from 0 (total deprivation) to 100 (universality) and is calculated using potable water, sanitation, electricity and basic education services, which directly influence the chances that a child has to forge a decent future. The IOH improves when there are more opportunities and when they are more equitably distributed. It allows also to identify factors which determine a greater/lower access to these basic services.

HOI results also show that a person’s birthplace, and in second place, parents´ income, are a powerful determinant for access to running water, sanitation and electricity services. Both parental education and socioeconomic status are closely related to their children’s educational achievements.

Between 1995 and 2005, the average annual HOI growth in the region reached 1 percent. Paraguay and Peru grew at a higher rate of 1.4 percent annually.

On average, two thirds of improvements in the HOI are due to increasing the coverage rate, while one third is due to reducing inequity in the distribution of available educational and housing opportunities taken into account.

The study also finds that between one fourth (Colombia) and one half (Guatemala) of income inequality among Latin American adults is due to circumstances outside of their control, faced in the beginning of their lives. Race is a key factor to explain income differentials, especially for the most disadvantaged groups. 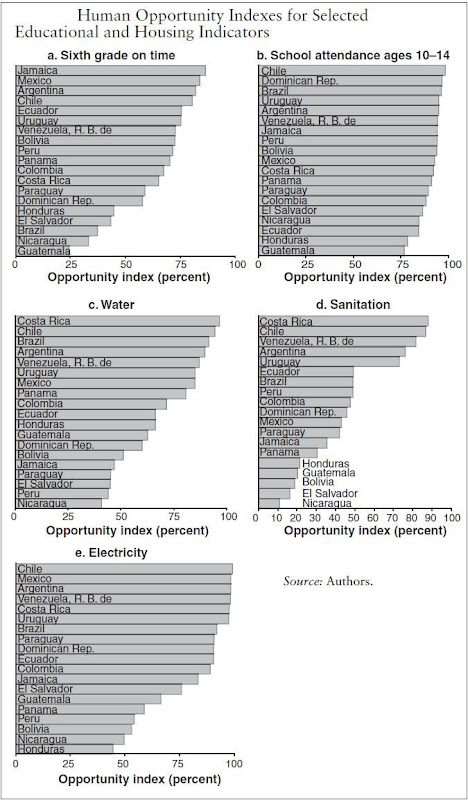 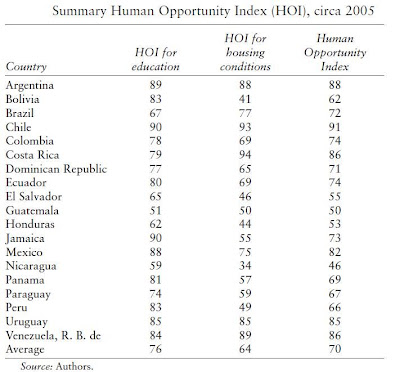 Posted by Chandan Sapkota at 1:27 AM No comments: