The 7.8 magnitude earthquake that struck Nepal on 25 April has caused widespread loss of lives and property. The scale of devastation is becoming clearer as the rescue operation is winding down and relief operation is picking up pace. The next challenge would be to ensure that reconstruction and rehabilitation is swift, with clear institutional and legal mandate, and strict timeline of deliverables with respect to reconstruction projects. The same bureaucratic set up and decision-making, with political wrangling in between, are not going to be fast enough given the urgency faced by the people and the nation. This topic deserves a separate blog post.

For now, let us look at the significance of the districts severely affected by the earthquake. In this blog piece, I will focus on area, population, share in national production, share in manufacturing and agricultural output, poverty, and fiscal condition. I will focus on infrastructure, migration, remittances, education, housing, etc in the next blog post. I hope that this kind of information will help to shape up the relief, rehabilitation and reconstruction narratives in the right direction. 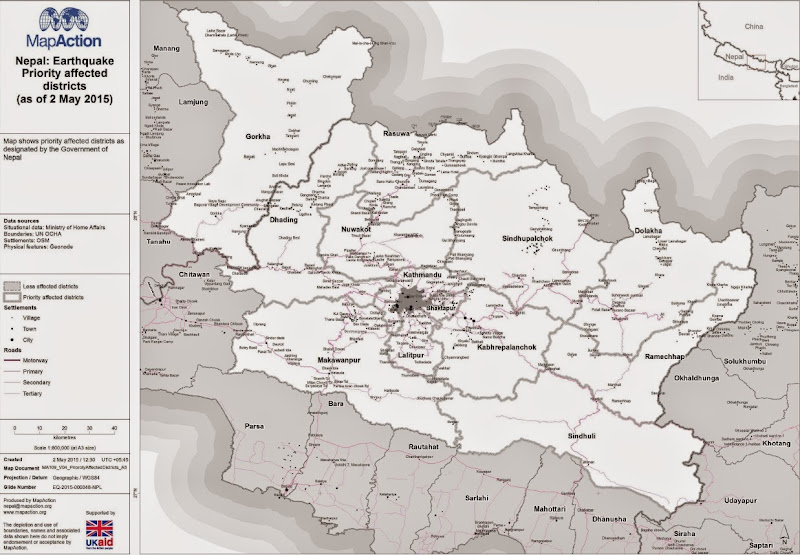 Severely affected districts: Gorkha, Rasuwa, Sindhupalchowk, Dolakha, Ramechhap, Kavrepalanchowk, Lalitpur, Bhaktapur, Kathmandu, Nuwakot, Makawanpur, Dhading, Okhaldhunga, Sindhuli and Lamjung. The government has designated 14 of these as priority affected area. Note that the earthquake has affected over 40 districts. The damage to lives and property seems to be higher in the listed districts.

Area: Together these 15 districts account for 16.6% of the total area of Nepal.

Population:  Together these 15 districts account for about 23.6% of total households and 20.9% of total population. The youth population (15-24 years) is about 22.8% of total youth population (about one million). In the absence of job opportunities and after maxing out whatever savings they have following the relief phase, these youth are the prime candidates for migration overseas for work (on top of those that have already migrated). It could impact local economic activities, create shortage of labor,  increase wages, and potentially slowdown recovery and reconstruction operations. 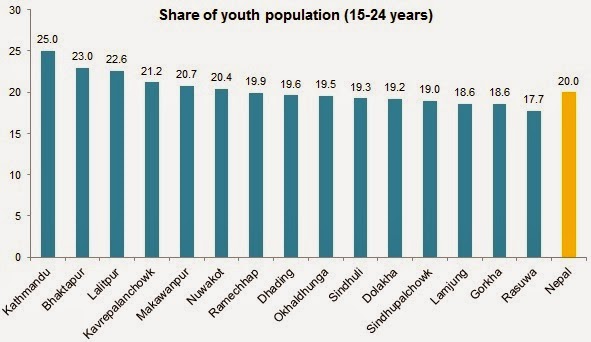 Furthermore, a majority of the affected districts have a sex ratio that is unfavorable to rescue, relief and reconstruction operations. Particularly, these districts have lower male per 100 female than the national average of 94.2. For instance, Gorkha (which also had the epicenter of the earthquake) has just 81 male per 100 female. Sindhupalchowk has 93 male per 100 female. This indicates a high migration trend in search for job overseas (mostly to the Gulf countries) and within the country (mostly to Kathmandu Valley, and the major industrial and trading hubs in Terai region). As they return to take care of family members and rebuild their houses, it is very important to devise appropriate measures and incentives (public works program, conditional cash transfers, etc— broadly, social protection measures) to retain them in the villages so that reconstruction activities are fast and in the right direction. 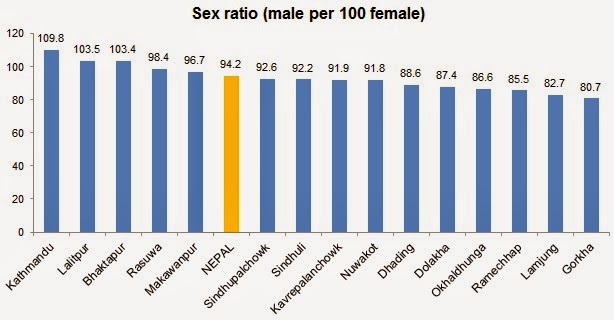 Poverty:  Together these 15 districts account for about 13.6% of the total number of people living below the poverty line. Sindhuli, Rasuwa, Makawanpur, Dolakha, Ramechhap and Sindhupalchowk have poverty rate that is higher than the national average (25.2%). These districts are also the most affected by the earthquake, and are likely to see more people pushed below the poverty line in the absence of immediate income compensating source/transfer. More on poverty by district here. 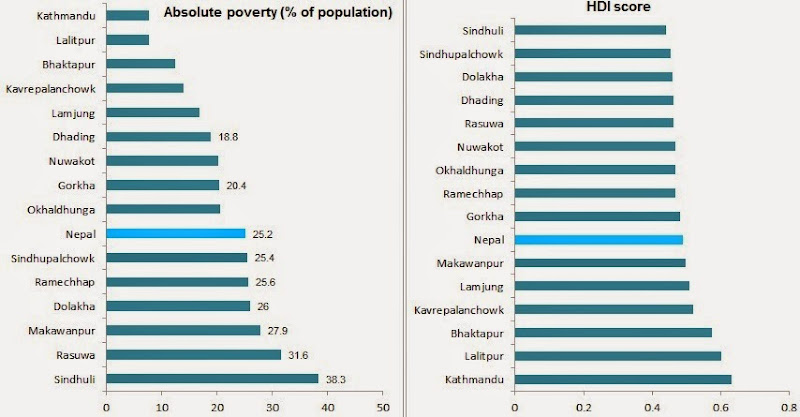 Economic activities: Together these 15 districts account for about 31% of estimated national GDP. Specifically, they account for 16.3% of total agricultural production, 30.3% of total industrial production, and 42.7% of total services production. A majority of it is accounted for by Kathmandu district, which has a relatively larger industrial and services base. Understandably, agriculture’s contribution is low because the Terai region, which is relatively less affected by the earthquake, is the main bread basket of Nepal. Despite the low contribution of agriculture in these districts (except Kathmandu), a large proportion of the population is directly or indirectly engaged in agricultural activities for livelihood. Hence, the impact on livelihood opportunities is going to be particularly painful. 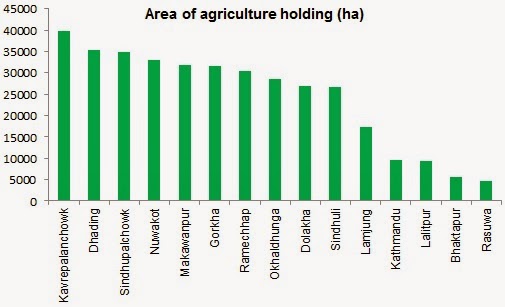 Furthermore, rearing livestock is also a main source of income. Per unit livestock in most of these districts (excluding Kathmandu, Lalitpur and Bhaktapur) is higher than the national average. The earthquake took lives of many livestock in these districts. It could eventually push more people below the poverty line in the absence of immediate income compensating source/transfer because livestock (and house) is one of the main assets of people who are in the lowest 40% income bracket.

Meanwhile, these 15 districts together account for 9.7% of total area for paddy plantation  and 10.1% of total paddy production. The plantation area and production share is above 20% in the case of maize, millet and buckwheat. Nuwakot, Makawanpur and Sindhupalchowk are the top paddy, maize and millet producers, respectively. Hence, in terms of national output, there won’t be much direct impact on agricultural production as most agricultural goods are largely grown in Terai region. However, indirectly the shortage of labor and below normal monsoon forecast for FY2016 may impact national production. Importantly, even if the impact on total agricultural production is minimal, its impact on livelihood, employment, and poverty would likely be significant in the earthquake affected districts. 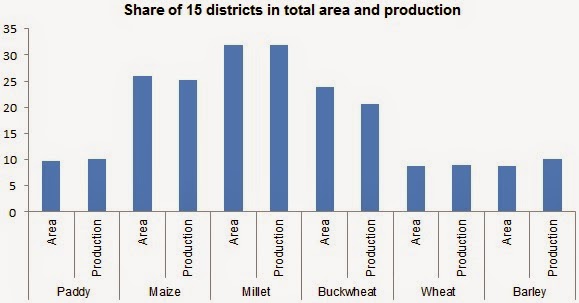 Small business: Together the 15 districts account for about 30.9% of total households engaged in cottage industry. Similarly, 25.3% in the case of business and 21.9% in the case of services. Overall, 24.5% of small businesses in the country is accounted for by these 15 districts. Measures to promote small business (finance, value chain development, supply management, skills development, etc) may be effective in recovery/rehabilitation phase, which will also help to prevent folks from falling below the poverty line due to the income shock caused by the earthquake. 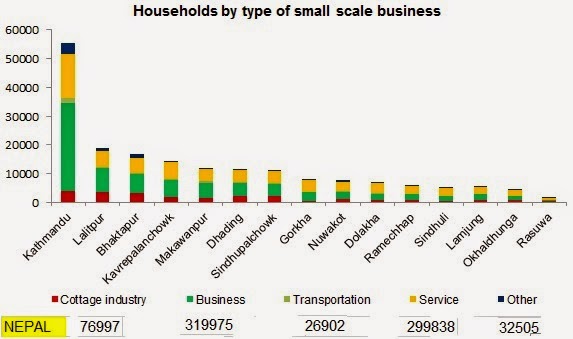 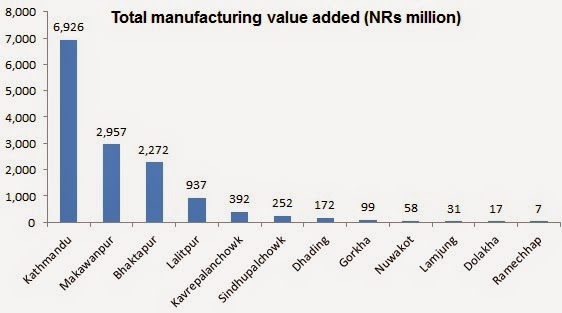 Fiscal situation: Only Sindhupalchowk and Lalitpur had revenue in excess of expenditure in FY2012. Together these 15 districts accounted for 47.9% of total revenue, 58.1% of total capital spending, and 12.7% of aid disbursement (excluding national projects). Kathmandu, Lalitpur and Sindhupalchowk accounted for 30.9%, 14.1% and 1.3% of total revenue in FY2012, respectively. All other districts’ share was less than one percent—indicating that not much economic activities happen in these districts (alternatively, industrial and services activities are minimal). These districts will require much higher level of resource transfer (grants) as well as capital spending for reconstruction and rehabilitation. 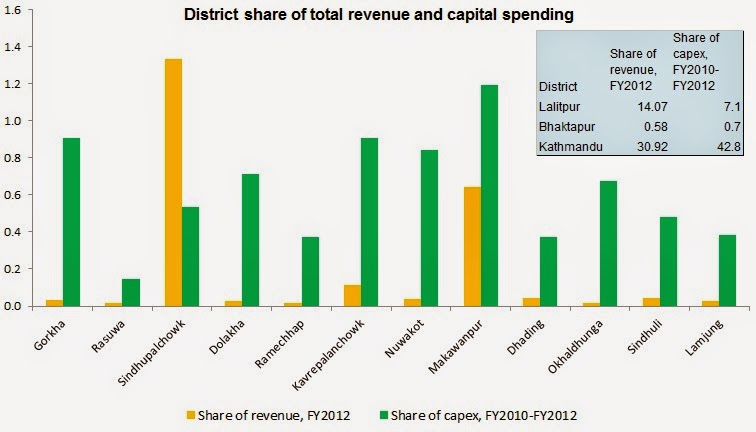